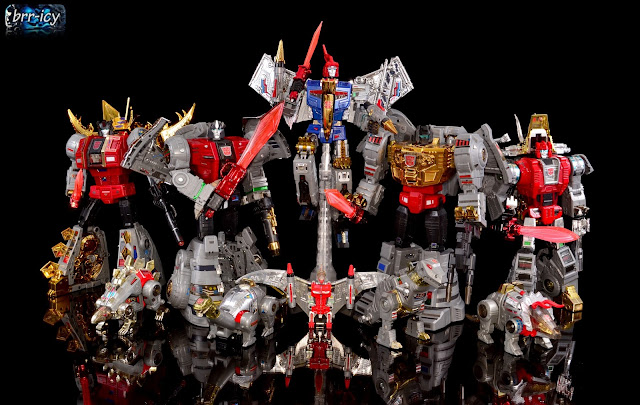 Finally completed the Fanstoys set. After a couple years of waiting impatiently, they're all here.

These guys are big, bulky, well built, and accurate. I really like that they kept the chrome and colouring as accurate to the show with these releases, there were also toy versions of Swoop and Slag released. 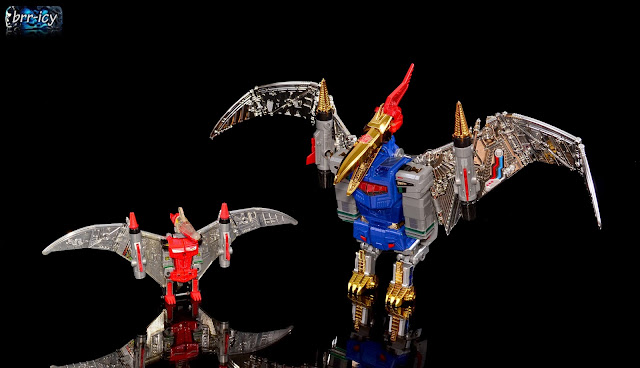 Swoop or "Soar" as Fanstoys calls him is huge, he comes with the stand shown in the opening photo, a clear beak and regular silver wings to swap out for the chrome ones. He was also released in red like the toy, but since the show he was blue, I grabbed the blue. All of my FT ones have the Reprolabels/Toyhax labels. In Pterodactyl mode, the wingspan is immense and very well articulated. He comes with the missile launchers that the original figure had, but the missiles aren't removable. 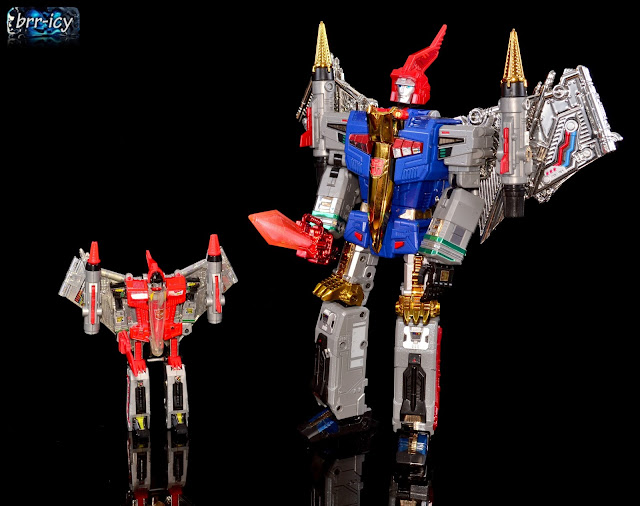 In bot mode, he's so well proportioned and articulated, adding in three joints for each finger, double jointed knees and elbows, etc. He comes with a sword that can be lit up with a watch battery, the missile launcher's handles can transform to be held in the hands. Originally, he shipped with a different face, but Grinder/Grimlock came with a new face for him and a couple others. The original I loved as a kid, mine had a broken beak, that you could put in place in each mode, and it held. 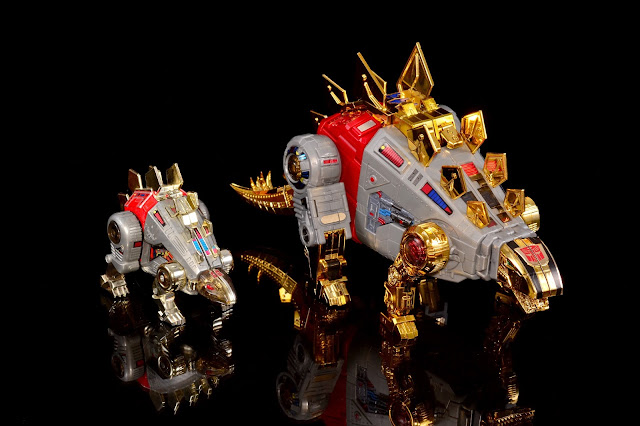 Snarl or "Sever" is such an impressive figure in hand, it's crazy the amount of articulation that is in the dino mode is well done and non intrusive like some of the figures that just look off with all the extra joints. 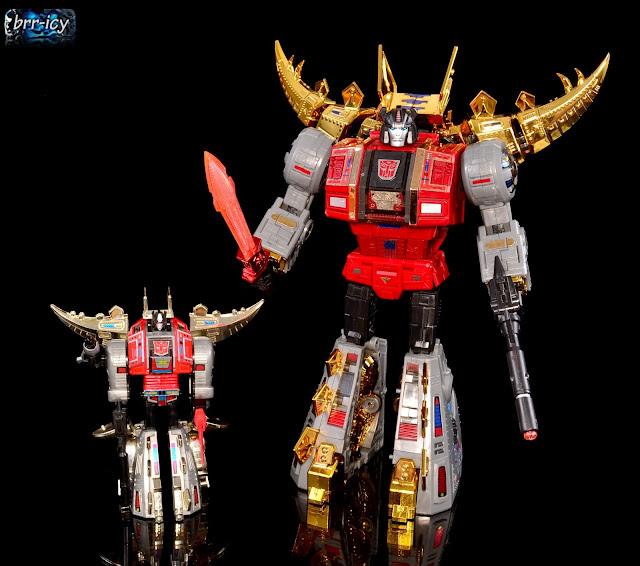 Sever got an entirely new head with Grinder, massive improvement, I really like how the figure's arms transform, the panels split and flip around to cover the gold chrome and snap back together. The legs also are pretty neat how the head and legs store inside the robot legs and the back end of the dino collapses into his back to make him thinner, I was thoroughly impressed the first time I transformed him. He got new panels to cover the bottom of the dino chest that looked missing originally. There's actually a glue line on my parent's kitchen table from when I glued the one side of the dino head on my original figure when I was kid and got it all over my fingers and tried to wipe it off on the table. 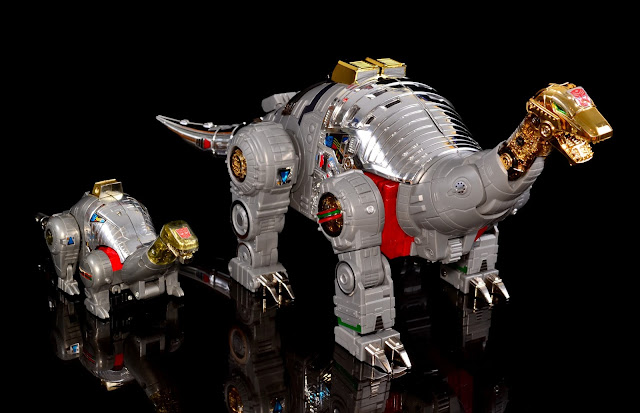 Sludge or "Stomp" is the biggest of them all, very fun figure in dino mode. All of the figures have swap-able red/blue eyes for the dino modes, Stomp also has the eyes popping out of his head like they did in the 1986 movie when Devastator slams on his back. I never had him as a kid. 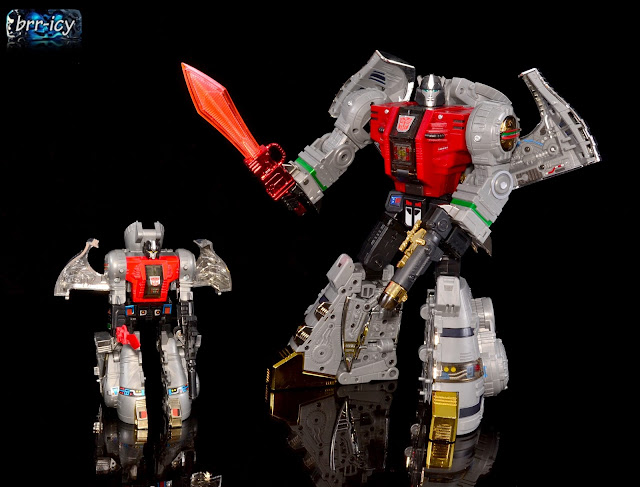 He was the only previously released dino to not get a new head from Grinder. You can see the tail inside the leg there, and the dino legs are slightly collapsed into the sides of his legs. I like what they did with the fists into the arms with the forearms and the points of the dino toes swing outwards to let the fists rotate out. For some reason, he's the only one that comes with his missile launcher instead of the rifle. 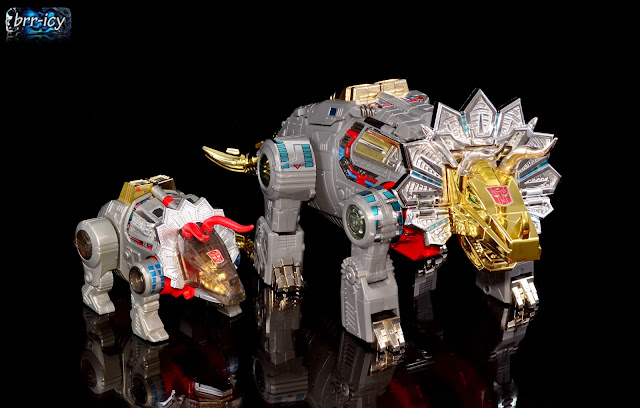 Slag or "Scoria" was the first released, he took me a while to pick up because of the potato shape the body has, but when I did, it's not as big of a deal as it was initially, the chrome distracts from that. There is another version coming out with a closer to toy accurate dino mode, but I don't think I'll get it. 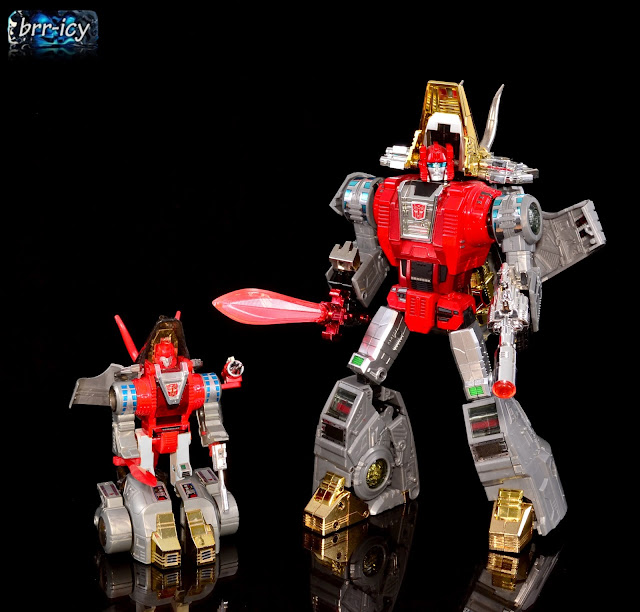 In bot mode, he's close to the Canadian version, which is closer to the animation than the regular version is. I love his bot mode, the only part that is a pain is the sword not going straight into his hand, I added the new face to him, and used a bit of Reprolabels scrap to wrap the main amount of the barrel's pink end to make it chrome. 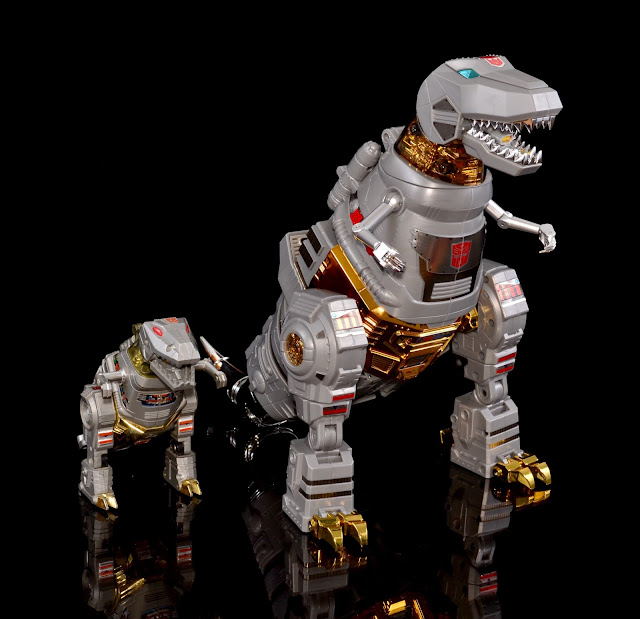 Grimlock I had as a kid as well, G1 and G2. I have had a few figures of him over the years, but this and MP-08 are the only ones that truly do him justice. My wife bought me MP-08 for my birthday, so he isn't going anywhere, but this is definitely the one that fits with MP-10 onward. The additional wrist articulation on the dino mode really help with the posing. 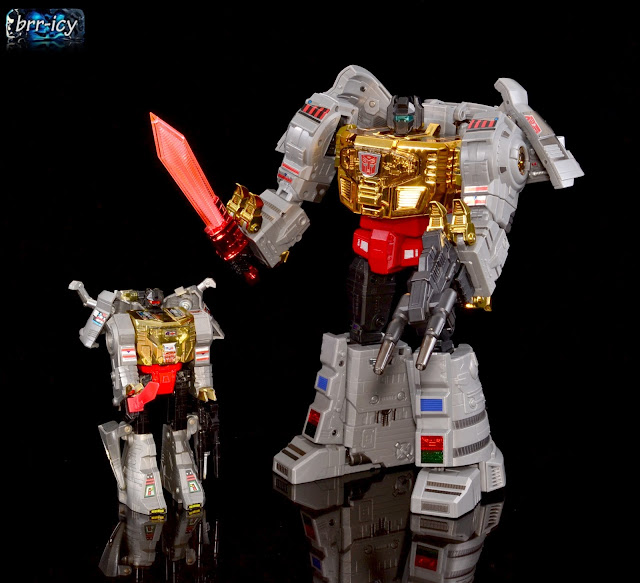 The way the tail hides inside the legs is great, He comes with his sword and gun, the chest and head joint is very interesting way to combat the little pegs on the back of the chest, and he's very poseable with good proportions. 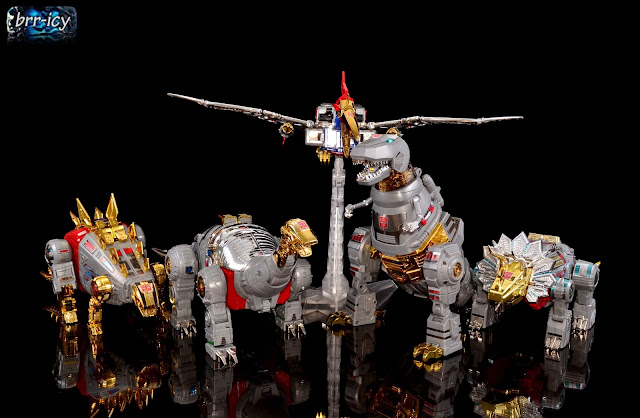 If you haven't picked them up, I highly recommend taking your time to track down a set. Whether it is separate or complete. I don't feel like I will be replacing any of them in the years to come.
Posted by Brr-icy at 19:18