Well, these are so bad, they're good. Glad I love the alt modes, because that's where they will stay.

These four make the Firecon's molds look good. They are also built around a gimmick, this time a pull back that when you insert the guns into the alt mode, they release. Interesting, but not really worth the sacrifice. 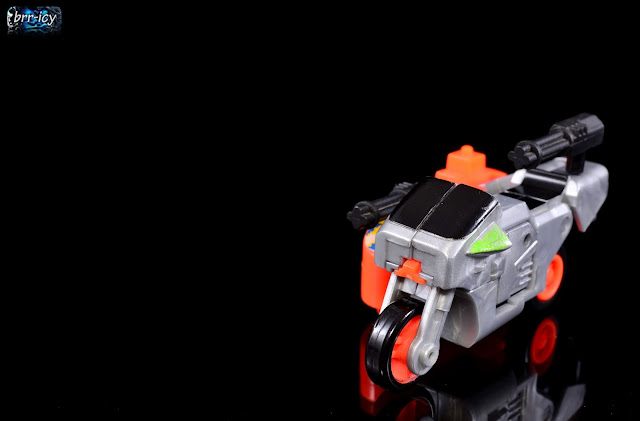 Bulletbike is a motorcycle.. The gimmick is activated by the hole in the sidecar. The bike mode isn't that bad, it's actually pretty good, especially for how old it is, the paint on the mirrors is interesting since it's not solid, it's kind of spattered on there. The transformation is pretty unique, I doubt we'll ever see another bike former do the same. 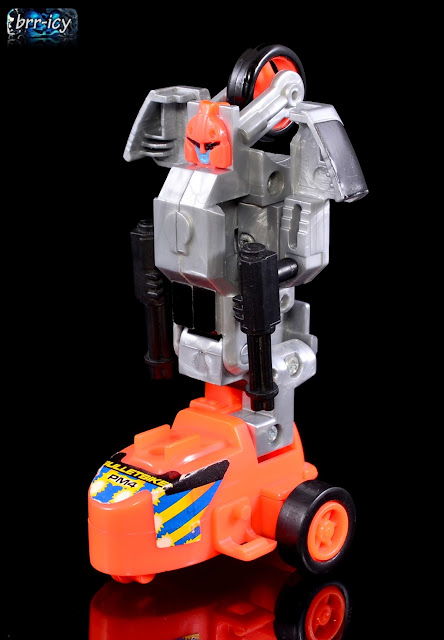 And that's where the goodness ends. The bot mode has no articulation, like not even able to point the guns forward, and it looks terrible. I picked this guy up from Sportinmortin on TFW just after I got Staxx. 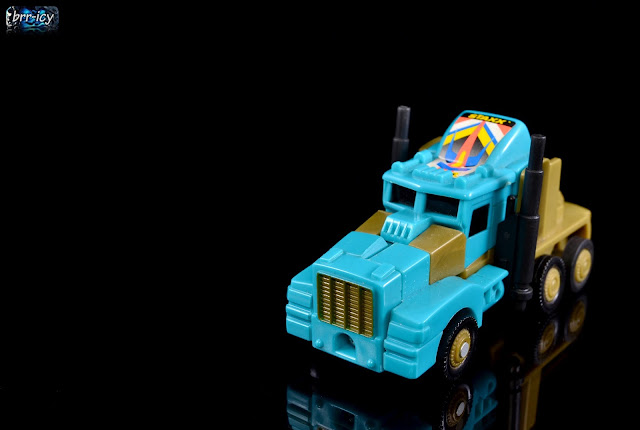 Staxx came from Demerge a while back, part of a "sample" from the lot I picked up recently that I got a while ago. His truck mode is pretty good. The rest of them's gimmick is done from the one side of the vehicle mode. I love how they actually integrated his guns fully into the vehicle mode. 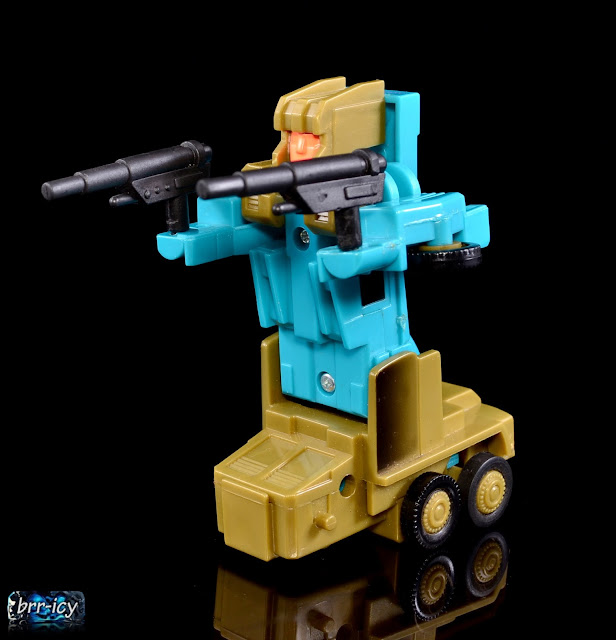 And then this happens. There's not a lot to be said for him, other than sorry. He does have arm articulation, too bad it's fused with his head, bonus is that he's always looking the way he's shooting. Him and Bulletbike make up the Decepticon side of this set. 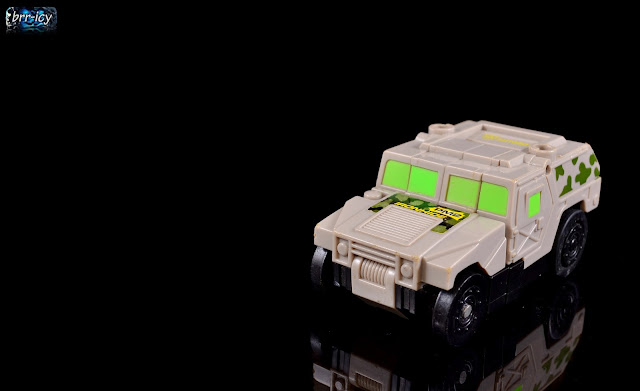 First on the Autobot side is Ironhide. I'm still missing his guns, but he looks alright, unfortunately they screwed up his windows and made them green like the Decepticons of the day. Neat looking alt mode though. 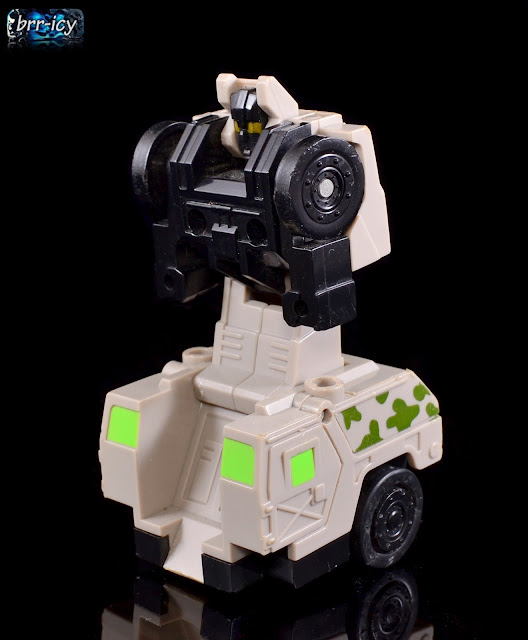 Johnny-5 is still alive! Seriously, what were they thinking? I got this guy today from Specimen_17, while the figure is terrible, it's great to have the set, He actually has arm articulation! 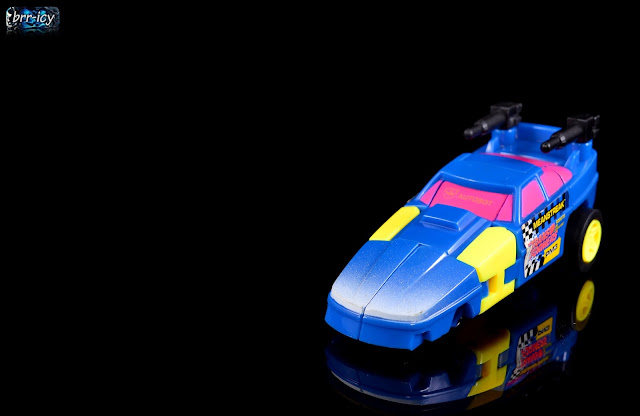 I love Meanstreak's alt mode, very Rotorstorm-like colours, and the fading white paint work. Very firmly European G1, these guys were released in G2 though. I got the body for him from Demerge and the guns from Specimen_17. This is my second time with him, the first I got as a gift, and passed the gift along when he left. 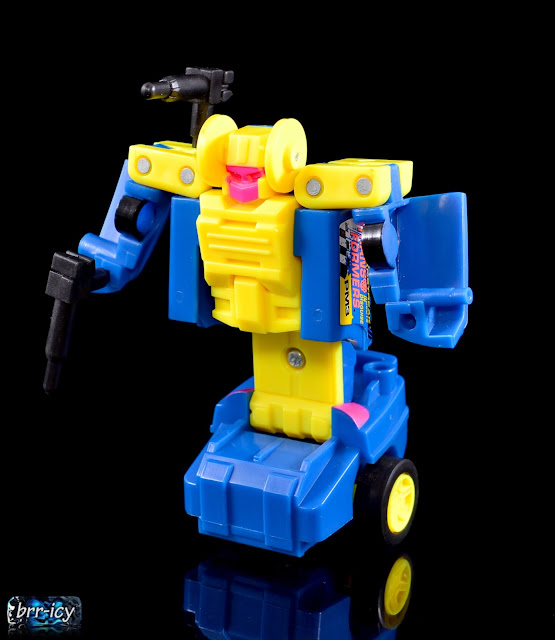 And we're back to why, why did they do this to him? He doesn't even stand straight, I had to prop up the front of his feet so he wasn't leaning forwards. He does get the ability to mount his guns on the shouder though. Good thing too since he can't aim forward. 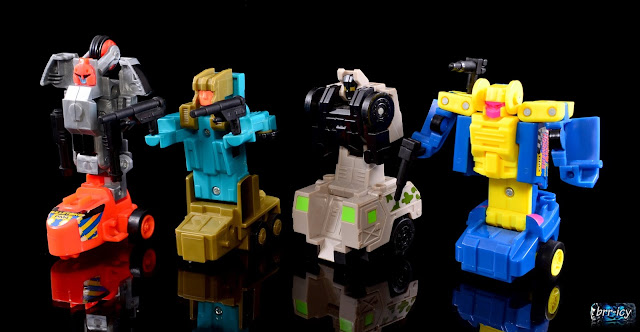 As much as I rag on these guys, they're kind of neat. In a quirky, ironic way. The alt modes are nice, and the gimmick does what it's supposed to. There's just one major draw back, the bot modes. I'm glad I got them though.
Posted by Brr-icy at 23:05