Twincasts and Soundblasters Review and Comparison 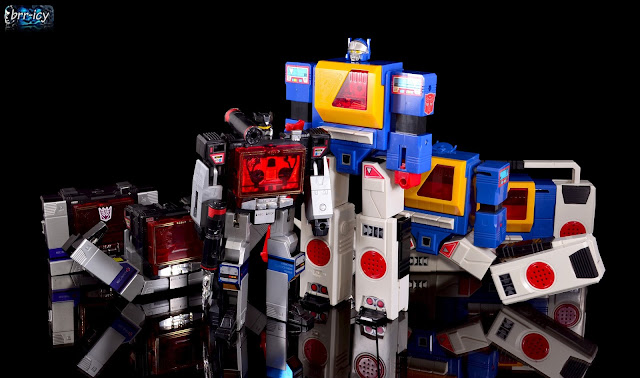 Finally got my hands on the vintage versions of these guys last week. I thought I would give the most comprehensive review I could of the three different versions of them,
Twincast is a "rebuilt" Blaster in Headmasters, after his and Soundwave's battle. The tape door has been modified to hold two tapes, and there's been some tech detail added to it. They are; left to right: Ehobby, Vintage, and Encore.

The differences on the Ehobby are a different mold for the door and foil printed stickers instead of paper. The Encore is very pronounced. All the labels are now tampos and they added a couple red bars to the thighs. 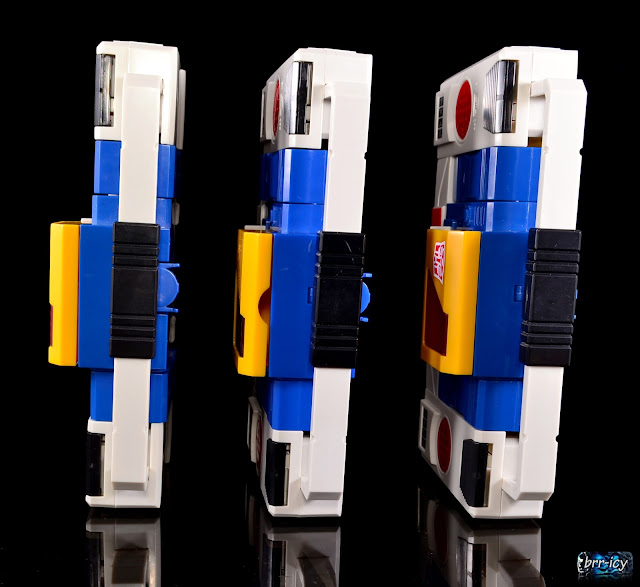 You can see the finger hole in the vintage's chest plate to help you get  any stuck cassettes out. 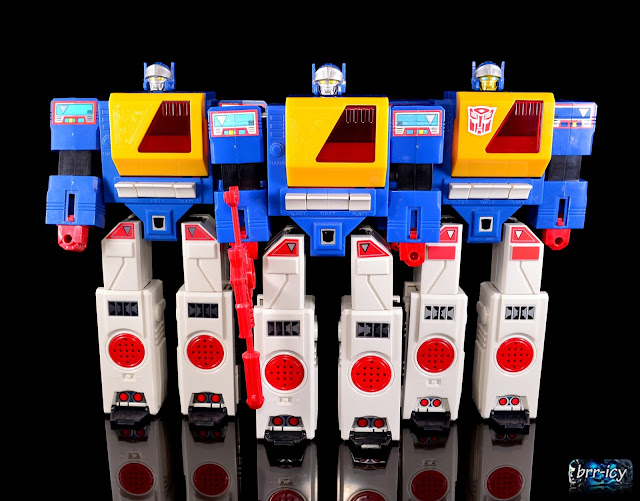 In bot mode, the only added detail that's different is the face and eyes have been painted differently on the Encore. The plastic quality on the Encore is severely lacking vs the other two though. 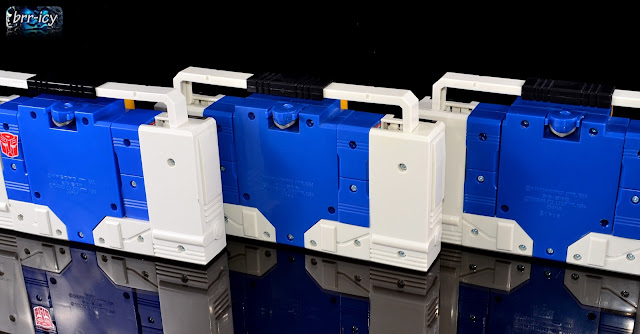 The stamps on the ehobby and vintage are the same, but you can use the other easy identification marks for that, the Encore is a bit easier to identify by the stamp with the block and serial number on it. 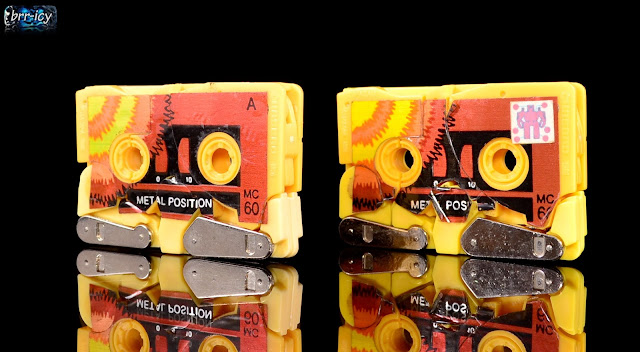 The vintage Twincast came with Steeljaw. He had an extra sticker in the corner that revealed Scorponok's weaknesses when put into Twincast behind the red window on his chest. 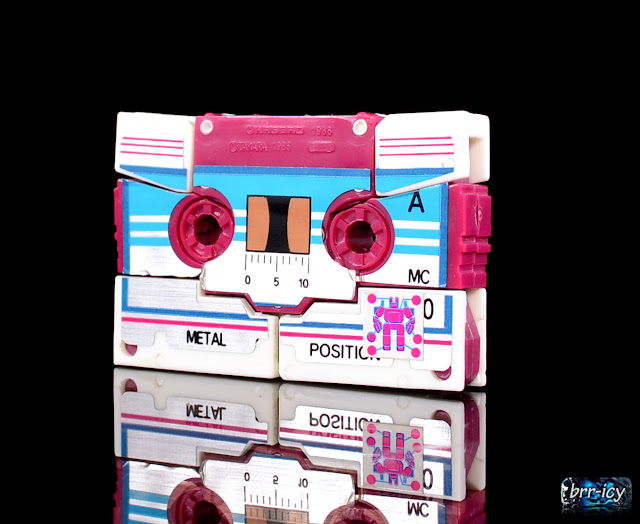 Ehobby Twincast came with Flipsides, who has both Scorponok and Fort Max's weaknesses displayed depending on which way you put her into Twincast or Soundblaster. 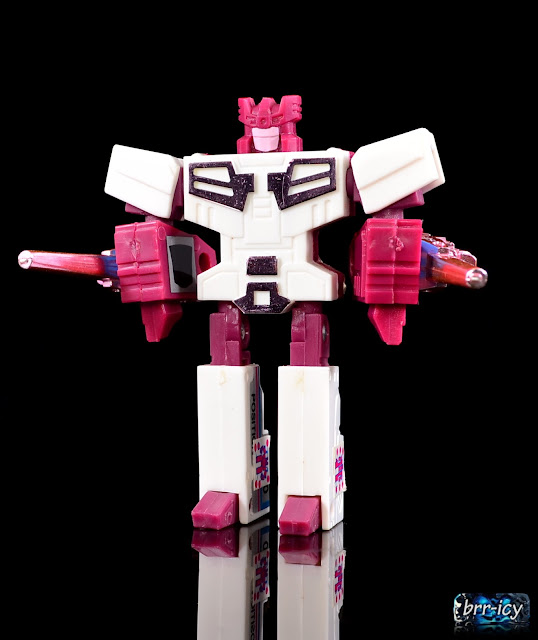 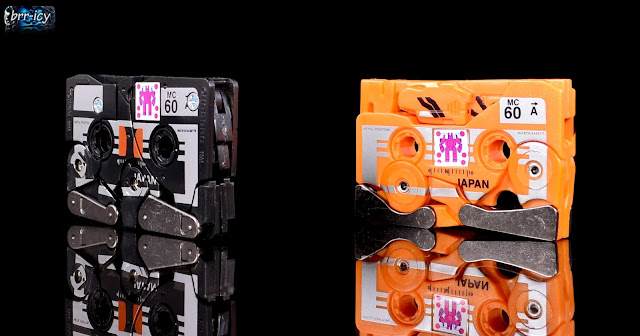 Encore Twincast came with Nightstalker, who is a repaint of Steeljaw with Ravage's guns, and Stripes, who is a tiger repaint of Ravage with Steeljaw's guns that have a bigger peg on them to fit him better. 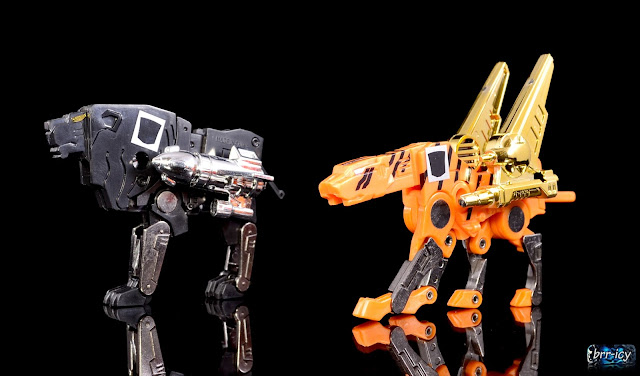 I really like the tiger deco and the black on Nightstalker looks pretty badass.

Soundblaster is the "rebuilt" version of Soundwave. He's also got a double layer deck with tech detail on it. He came in; left to right: Bookstyle, Vintage, and Encore. The labels on the vintage piece are blue while the Bookstyle one has purple. Like Twincast, the Encore has tampos instead of labels and lesser plastic quality 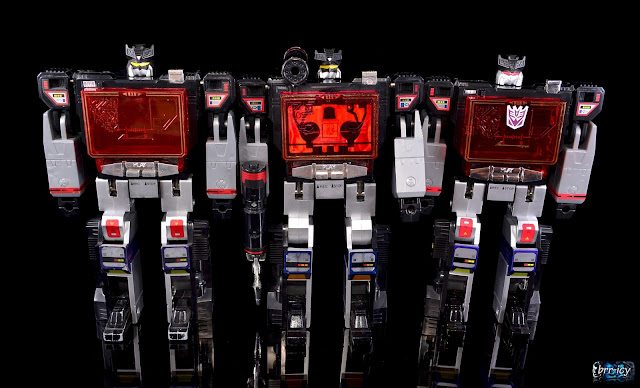 You can kind of see the different silver on the Encore, looks kinda translucent. The bookstyle had pretty bad paint on mine, just kind of flaked off his feet. The Encore also has a different paint scheme on the face. I tried to get a pic of Buzzsaw showing Fort Max's weaknesses on it.

The reissues both have a circle date type stamp above the actual Hasbro stamp. The vintage has nothing there at all. you can easily see the colour difference on the labels for the vintage here as well.

The vintage Buzzsaw that came with Soundblaster had a different head mold compared to the Soundwave version, giving him a small mohawk. I like it, gives him a sinister look i think. I didn't bother taking pics of the tapes that came with the booksty;e since it's just a straight reissue of Ravage and Buzzsaw with the weakness sticker over the tape reels.

Encore Soundblaster came with two of the best ideas for reissue repaints. Enemy was a tape stuck to the side of an AM radio originally. There was also a head for him that was a voice changer. The second tape is Wingthing, a repaint of Ratbat to be a cassette version of Soundwave's Actionmaster partner. 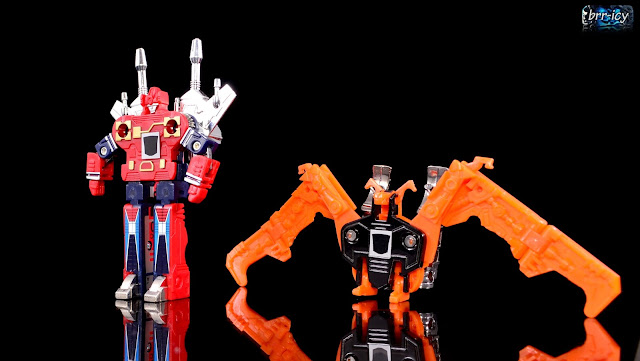 I really like the colours of these two. Enemy has the stickers tampoed on like the larger figure. Wingthing is very Halloween-esque. 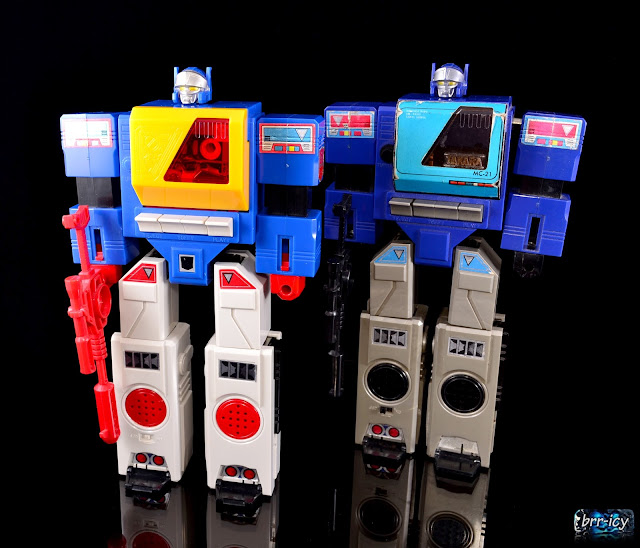 There was also another blue version of Blaster, MC-21 or Microchange blue Blaster. most of the mold for the Microchange versions of them are different though, where the Transformers versions have molded switches and knobs, the Microchage has actual working ones. The chest plate is also different, having Takara written on it, and a plug for the cassette he came with to turn him into a working radio. The stickers are also a different colour than the regular ones.
Hope you enjoyed this review, I know the reissues have made these guys pretty common, but they weren't always.
Posted by Brr-icy at 14:22