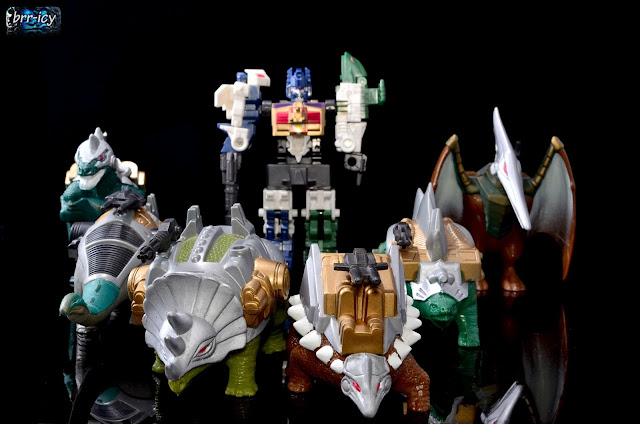 Suffice to say, I've been really looking forward to these guys, I got them in combination from Random Toy Reviews and Megatoyfan. They were in the works for a while, but they are finally home. They are a redeco of Monstructor with different shells.

We'll start with Goryu and go in numerical order. Goryu is the leader of the Dinoforce in Victory. They are the Destron comic relief, as they go around causing trouble and end up losing every time. 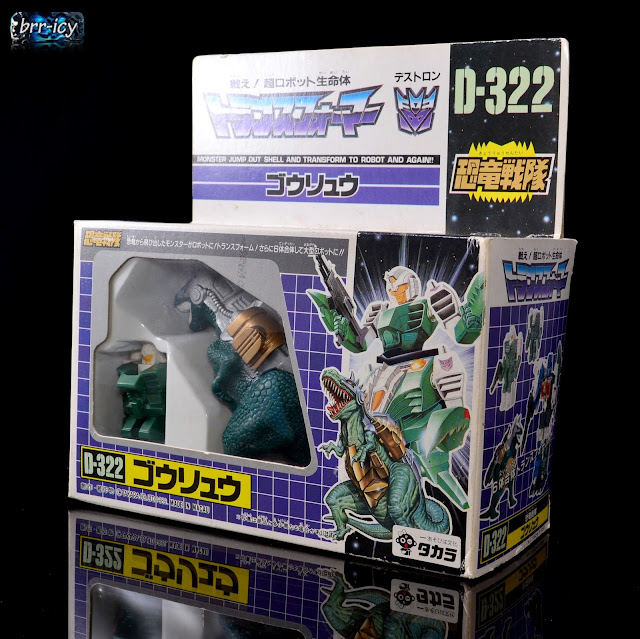 The box is very classic G1 with the character art on the left and the window to showcase the toy. I really love the look of them in their boxes. 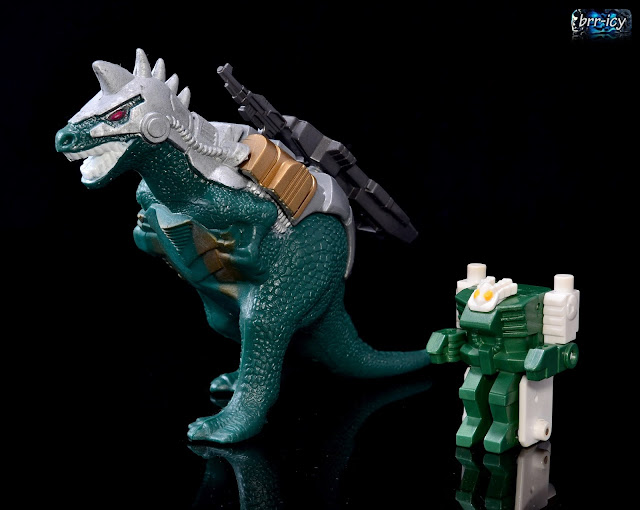 The shell for him is a |T-rex, and all of the shells can hold the combiner kibble and their pistols on the back. They all turn into strange little robotic monsters. 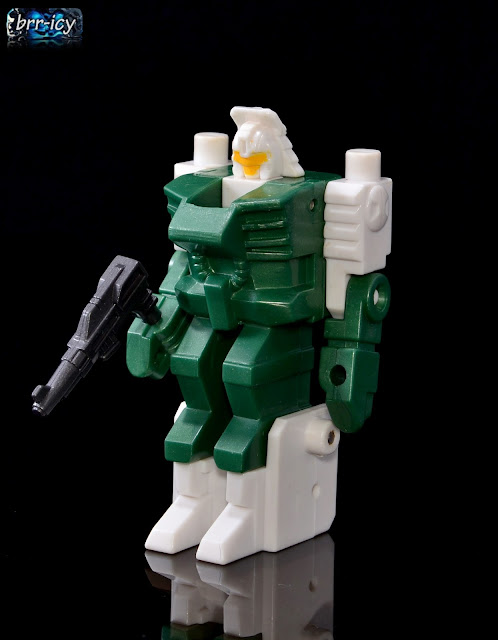 To transform him, you just flip the legs and head out, the arms you can reposition to your liking, as long as your liking is bent or unbent at elbow. He forms the leg of Dinoking. 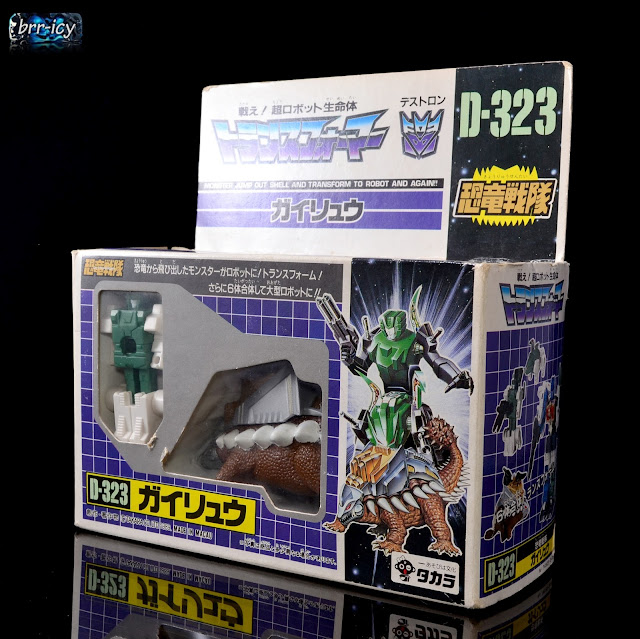 Gairyu is next in line, 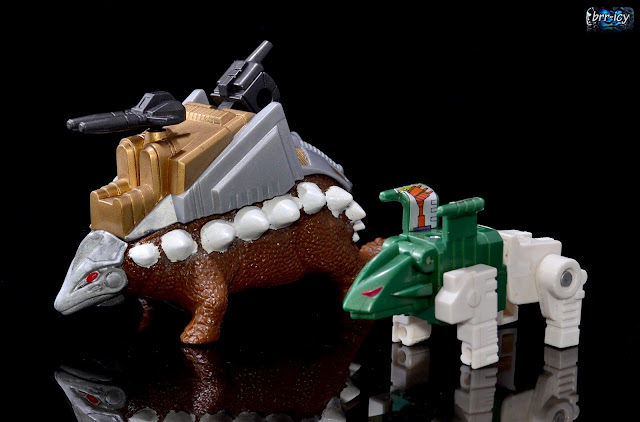 the ankylosaurus shell looks pretty neat. These do have the same issue as Monstructor with the shells getting sticky, luckily a friend mentioned that they can be cleaned with baby wipes, so off to the store I go. 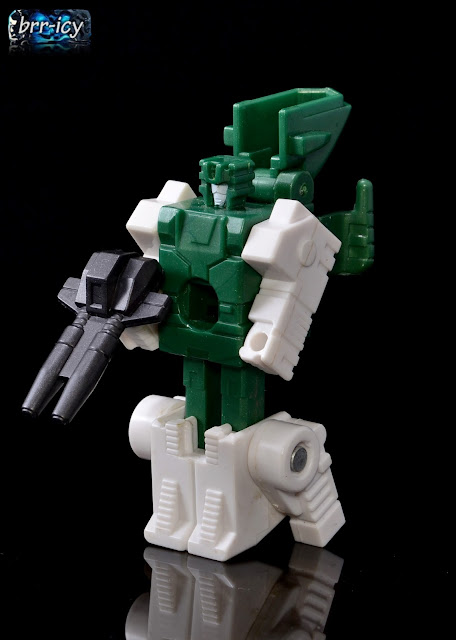 His transformation is basically unfold legs, flip head. I really like the colours for this set, the white, blue, and green really pulls it all together, unlike the mishmash of colours on Monstructor, who unfortunately suffers from GPS. One day I'll get him, just not yet. He forms the arm of Dinoking 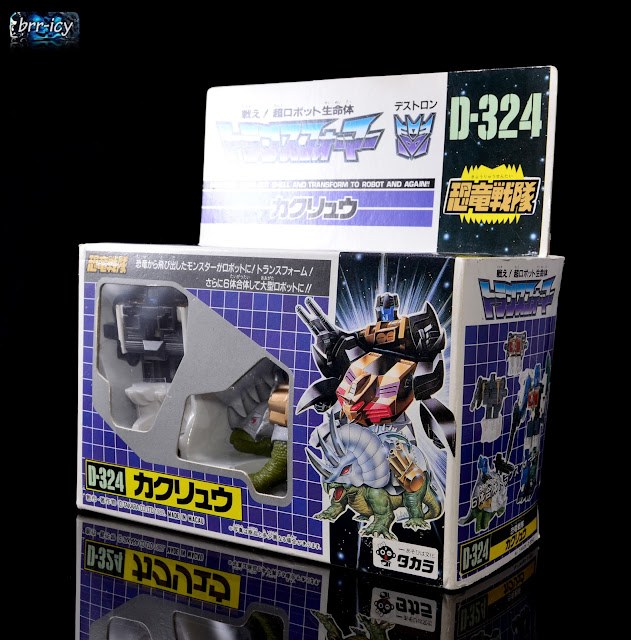 Kakuryu is the dumbest of the group, and probably the funniest in the group in the anime. 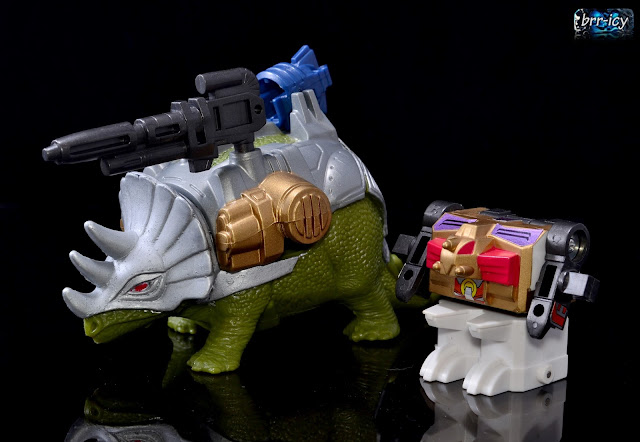 His triceretops shell has the horns lined up in a straight line, kind of strange, but I won't argue with it, it looks neat. 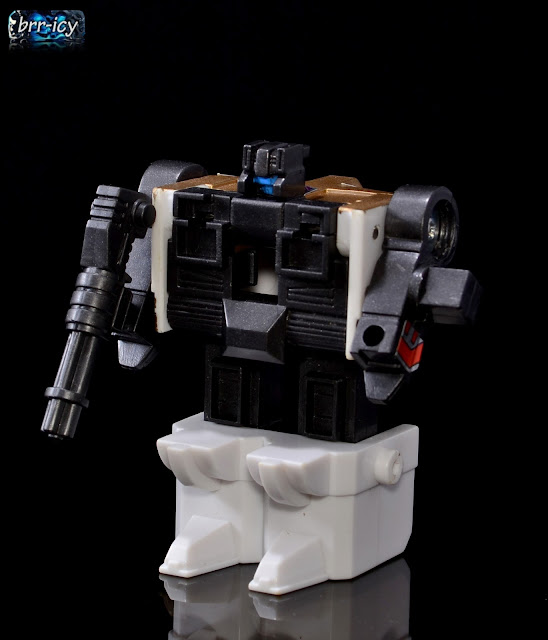 Transformation to bot mode is basically just flip the legs and head out. Curiously he is shown holding Rairyu's gun on the artwork. He's the chest of the combined mode. 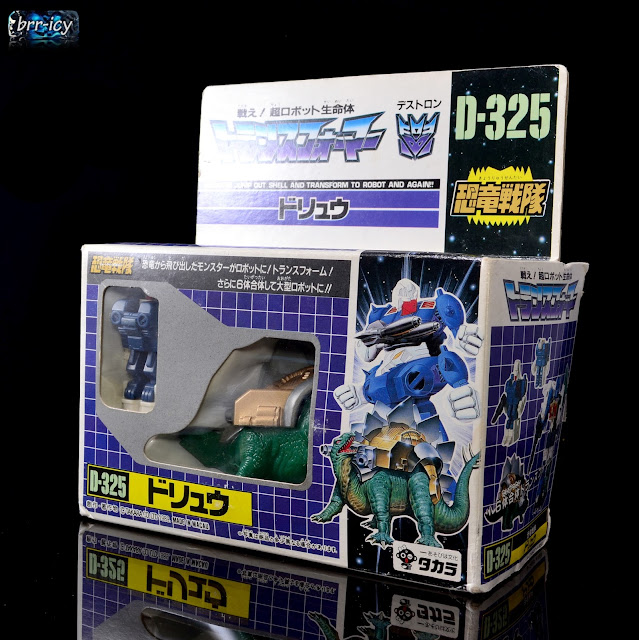 Doryu is the next one on the list. His alt mode is shown pretty bad ass in the artwork, too bad not so much in the toy. 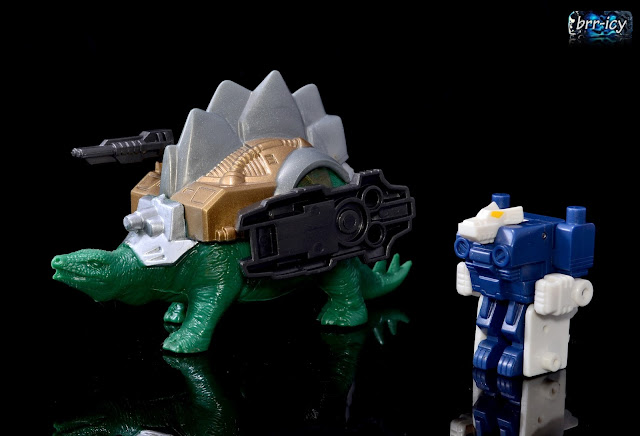 His shell is a stegosaurus. Not sure what his alt mode is, but it's kind of interesting. Werewolf robot or something? He's the other leg of Dinoking. 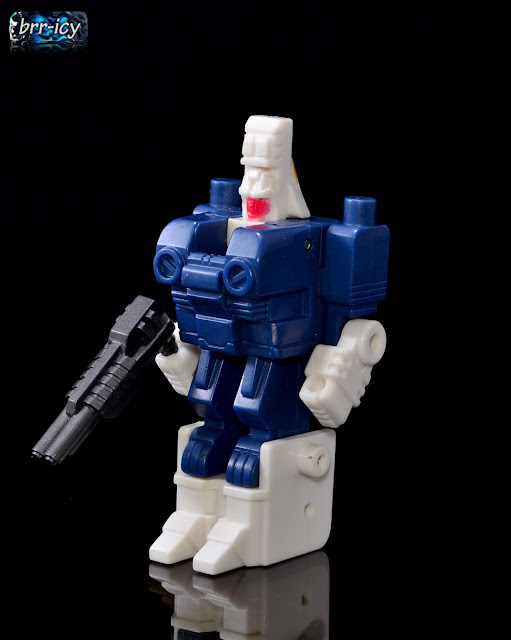 in bot mode, the contrast between the deep blue and the white is stunning, 2/3 of these guys are unused, so they kind of lack the detail that the stickers would provide, but the clean look suits them at their size. 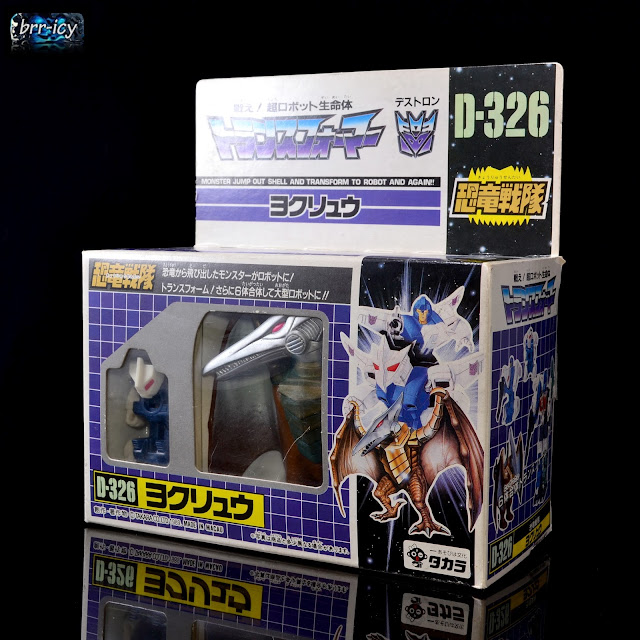 Yokuryu is the Pteradon of the group, with a moving neck so he could fit in the box nicely. 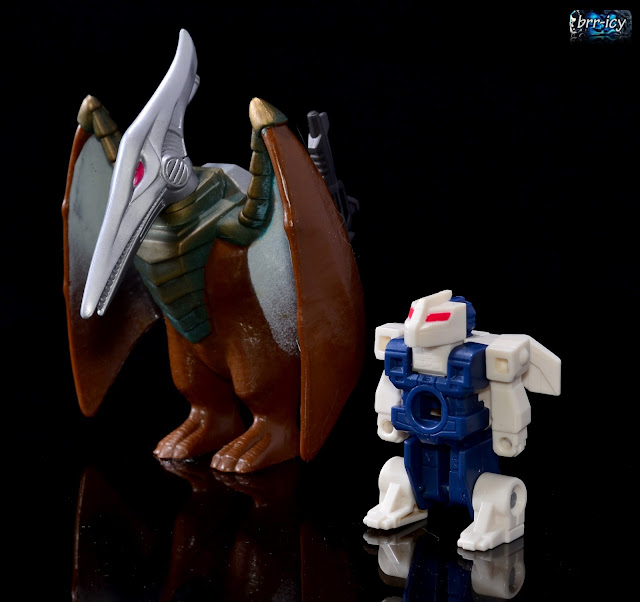 He is a small bird type monster, looks pretty good, and one of the more convincing alt modes of the group. 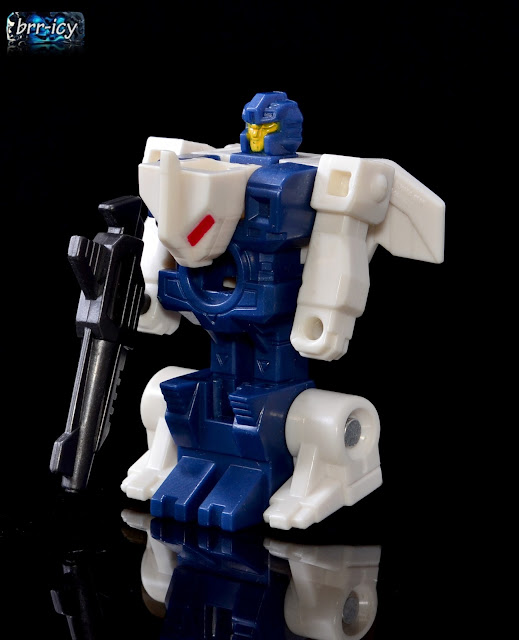 In bot mode, he also has the nice blue on him. He forms the other arm of the combined mode. 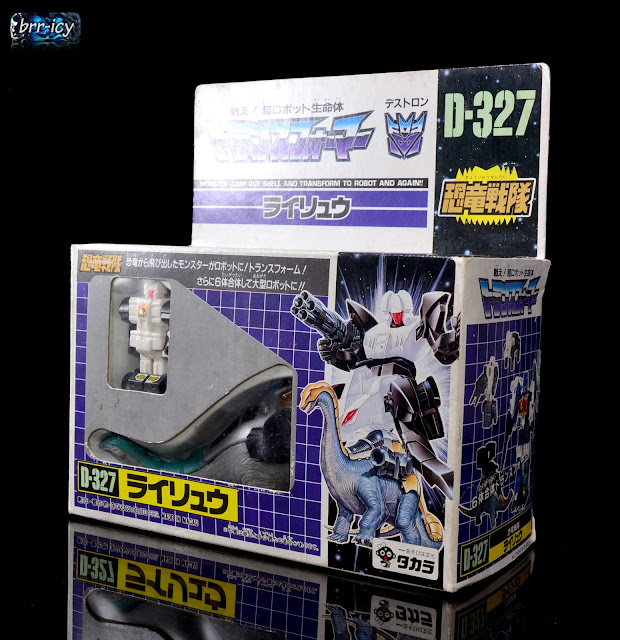 Rairyu is the final member of the team. Shown here holding Kakyuru's gun.

The shell comes with the tail removed in the box so it will fit. He forms the crotch and abs of the combined mode. 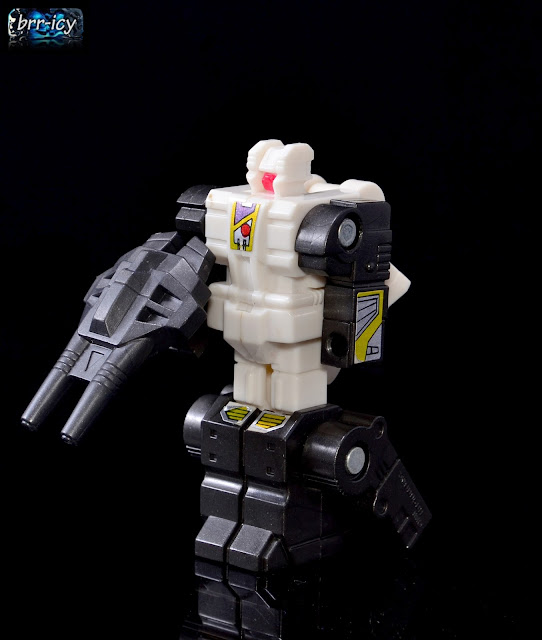 The black and white kind of makes him look like a police bot or something. Pretty nice. 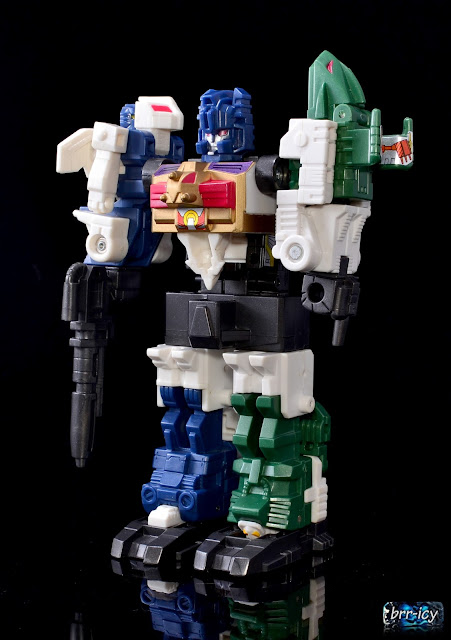 And finally, Dinoking. I really like the combination on him, for his size it's pretty intricate and had a couple twists I wasn't expecting like the chest flipping up for Rairyu to peg into the chest of Kakuryu and the slide in fists. 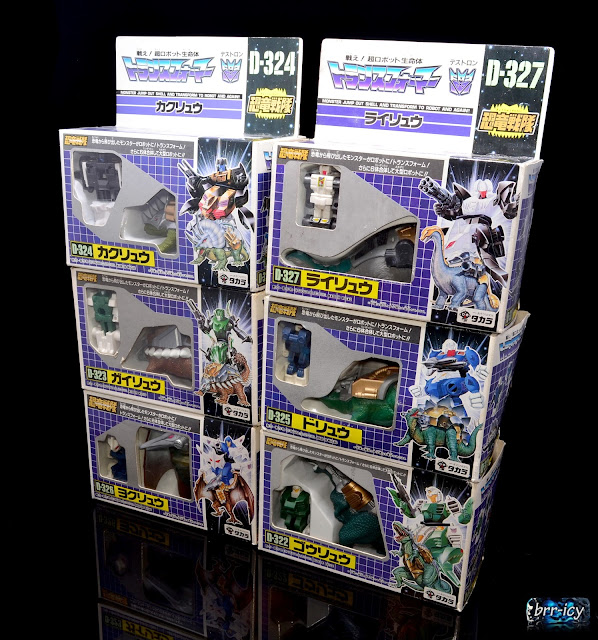 He looks right at home with the rest of the Decepticons from his line. I need to get the Crossformers replaced later, but other than that, looks good for me. 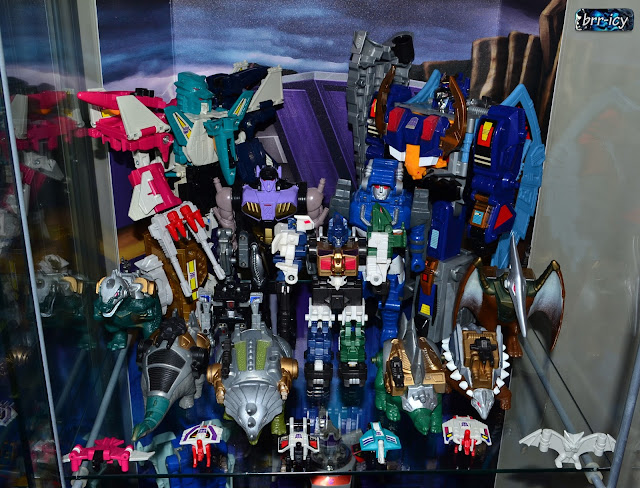