Been a while, but I wanted to do some of the recent official mps and a few older ones. 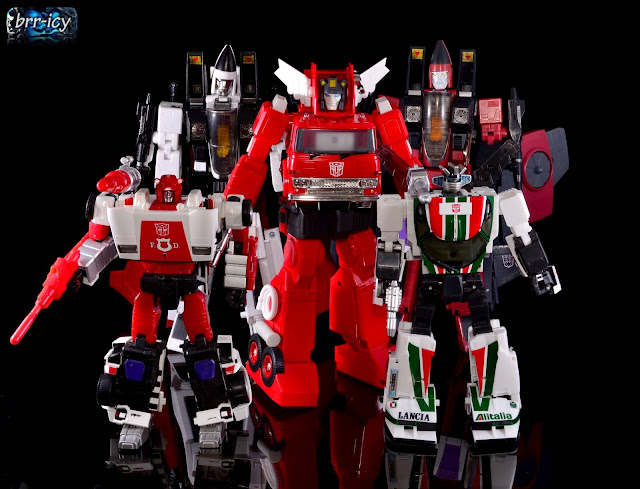 Don't know how I missed Wheeljack. but he's still one of my favorite car bots. 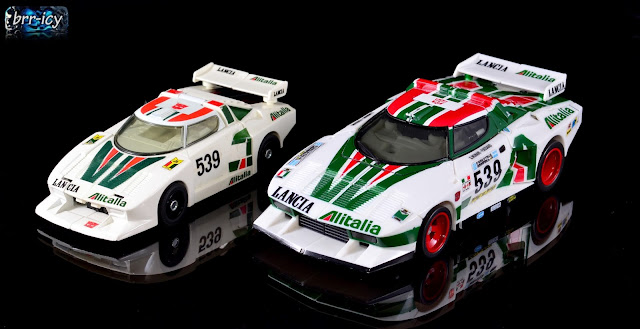 I picked up the Reprolabels set for him so he would have the proper livery, I really like the Lancia Stratos. and both the G1 and Masterpiece have a beautiful car mode. There is a space for the Diaclone driver on the G1 figure. 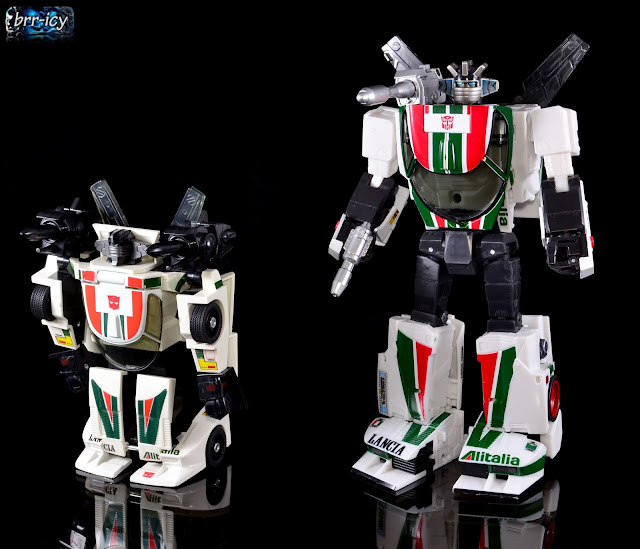 In bot mode, the G1 figure is out of proportion, He has a pair of launchers on his shoulders, whereas the MP has one and a small pistol. The transformation is very fluid on the Masterpiece, he ends up looking like he stepped right out of the cartoon besides the extra livery from the Reprolabels set.

Next up, Red Alert. I got the first version of him back when he was released, The new one didn't do it for me, so I never bothered to replace him. I really like the toy details they added to the earlier MP figures that found more of a balance between toon and toy. 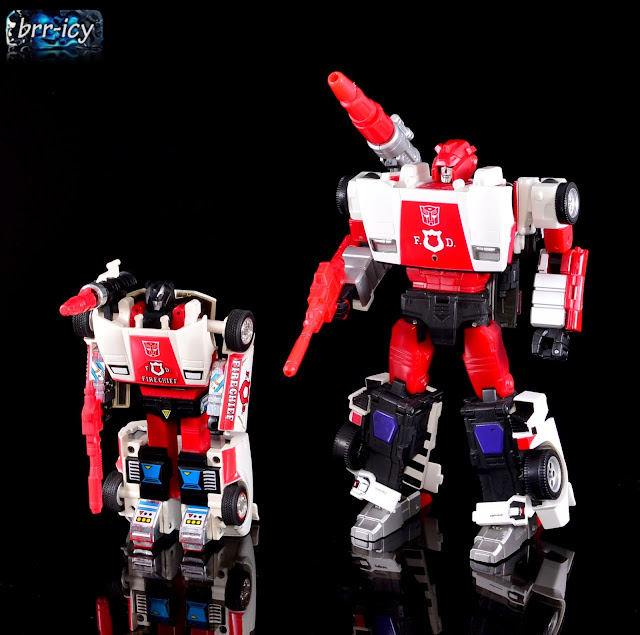 In bot mode the MP is really nice looking, the first version is pretty close to the toy in colours, the second version was a lot closer to the toon, but removed a bunch of detail. 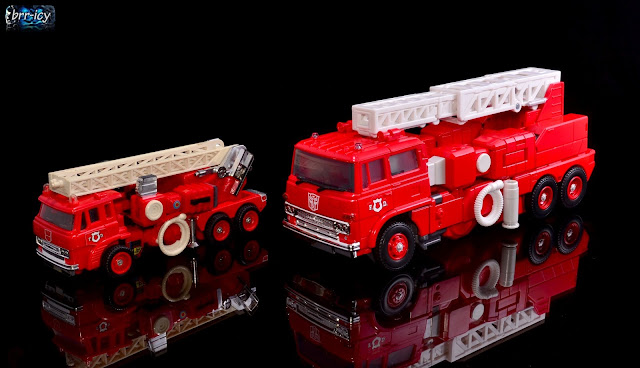 Inferno was the latest new mold Masterpiece to come out, I am impressed to say the least. He's probably a better match to the newer Red Alert, but I don't really care. He came with a slew of accessories and faces, including dechromed grill and hand cannon, toon or toy heads and faces, and a little rack for Red to be carried like in the toon. Plus a water accessory. 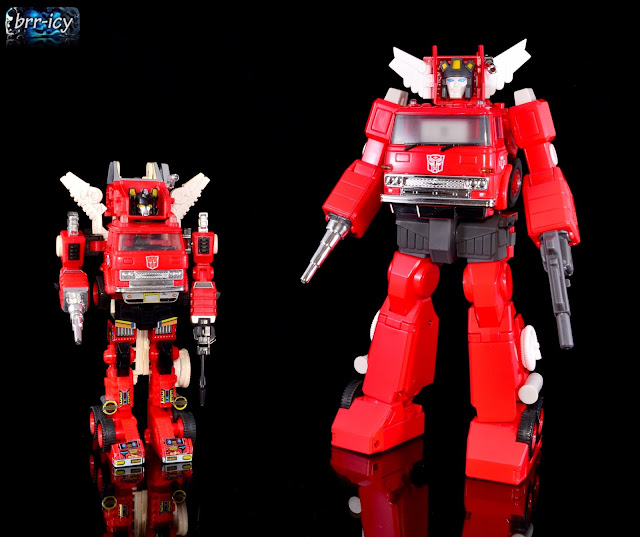 In comparison to the G1 figure, he looks incredibly plain, to the toon, bang on. There is so many neat tricks with the Masterpiece's transformation that I was taken aback a few times during it's first transformation. The way the ladder hides, how you don't need to take the hose off the hand to transform it back to a hand. to the way the rear of the truck collapses into the feet so seamlessly. 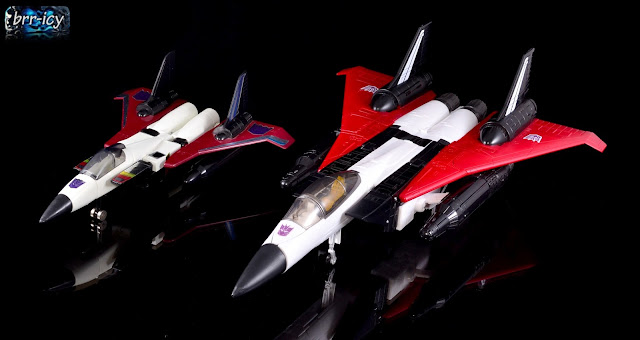 These guys have gotten a lot of flack from the community in general because of the way they were released, but I don't think it's entirely Takara's fault for their prices and availability. Neither of these two figures got out of the gate without an issue, I really hope Dirge can get out flawlessly, but that's still a bit away. In jet mode, Ramjet is great. I really wish they had used the toy red instead of the cartoon, but that's my only gripe. I really like that they added opening engine access panels to the wing engines and the bigger bombs that encase the nullrays. 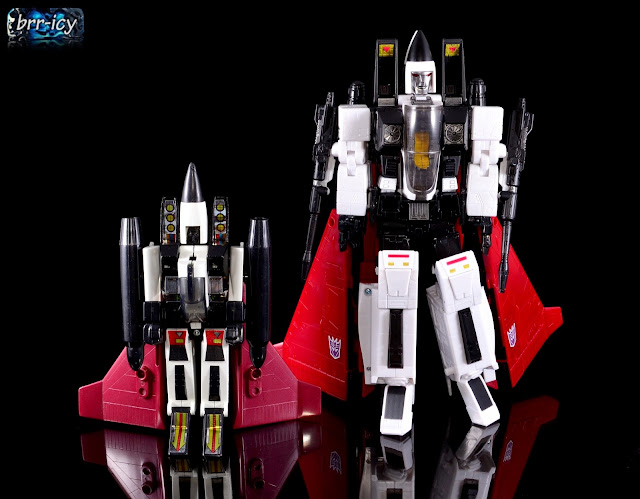 In bot mode, they are a pretty good match to an unstickered G1 toy. I'm willing to bet Reprolabels/Toyhax makes a good toy accurate set for them eventually. I like the additions and remolds they added to him to differentiate the figure from the regular release seekers. New knees, new shins to have the toy intakes on there, and the way the chest rotates to bring the part of the nosecone up to be the head. 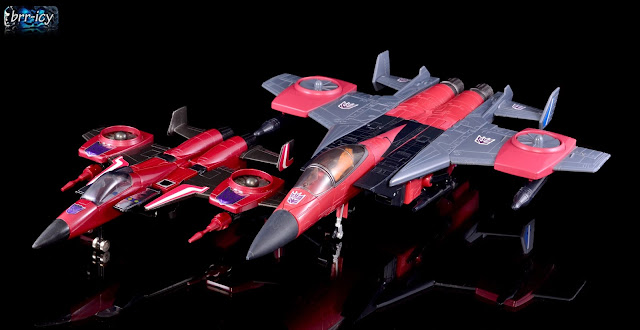 Lastly, we have Masterpiece Thrust. Another really nice looking figure, I'm not sure why they put the extra little fins on the back of the jet, but it doesn't bother me too much. I do find the lack of wing striping on him and Ramjet a little odd, but maybe the Hasbro version or V2 Takara might have the toy look. The G1 toy's red is pretty unbeatable, so I might be convinced to get another. For this mode, the modified the nullrays to become small guns on the bottom edge of the fuselage, and gave him the more toy accurate bombs that he used in the show as an accessory. 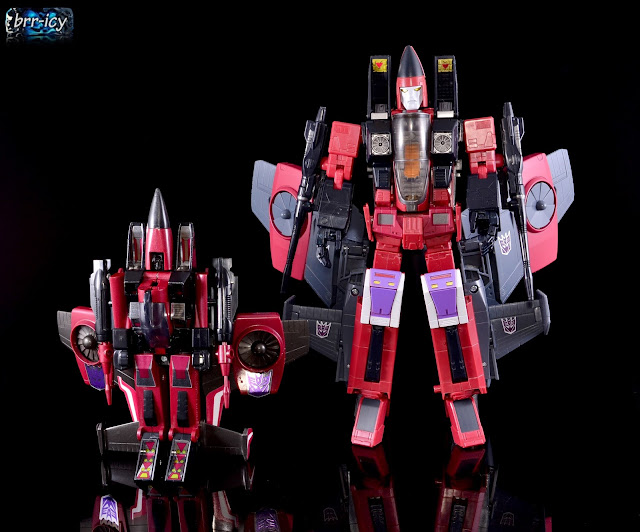 In bot mode he looks like he just stepped out of the cartoon, there was an issue with the waist pin not being pushed in all the way, but a little extra pressure with some wood blocks and a c clamp, he's good as new. there's a lot of extra joints and such added to the wings to make them transform properly to get his show look. They even added a joint to flip the rear wings up when they really didn't need to. I am patiently waiting for Dirge and the reissue of Skywarp to finally finish my seekers in MP form once and for all.
Posted by Brr-icy at 15:40