I've been after the set of  "yellow weapon" Battle Patrol for a while. Finally scored a set from Artfire2000 this week.

Below is the Return of Convoy/ regular release of these for comparison's sake. You can see the differences in them. They were phased out rather quickly.

In vehicle mode, you can really see the yellow on the three of them, they were the first wave of this Patrol released in Zone, not sure how many are out there, but it took me a few years to track down a set. The blue seems a deeper colour as well, but that might just be the light in the photos. 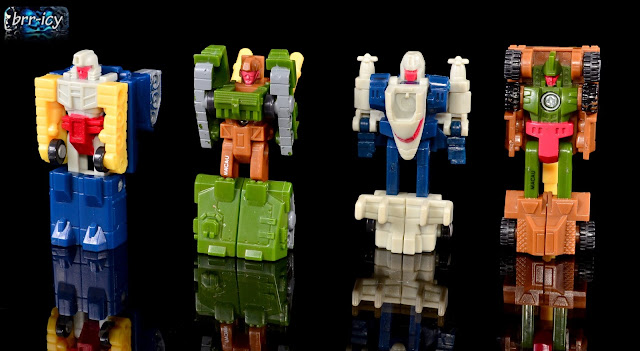 In bot mode, the yellow arms on Powerbomb make more sense than the half a tread in alt mode. The rest of the yellow parts are on their backs. 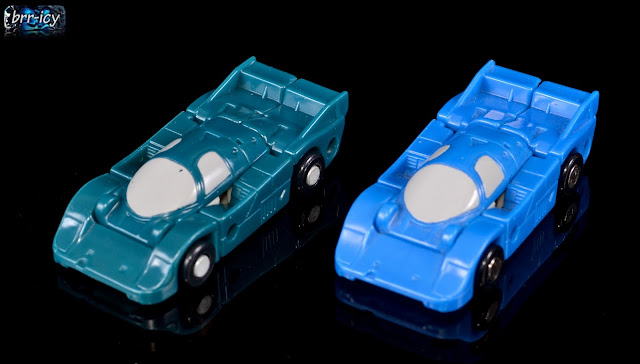 I'm not 100% on this being a variant, but considering it's the seventh time i've seen this colouration and only on Zone released versions, I wanted one for myself anyways. The bright blue one is the US release, the teal looking one I took apart and it's consistently teal inside too, if it's a variant, cool, if not, it's different enough for my display. 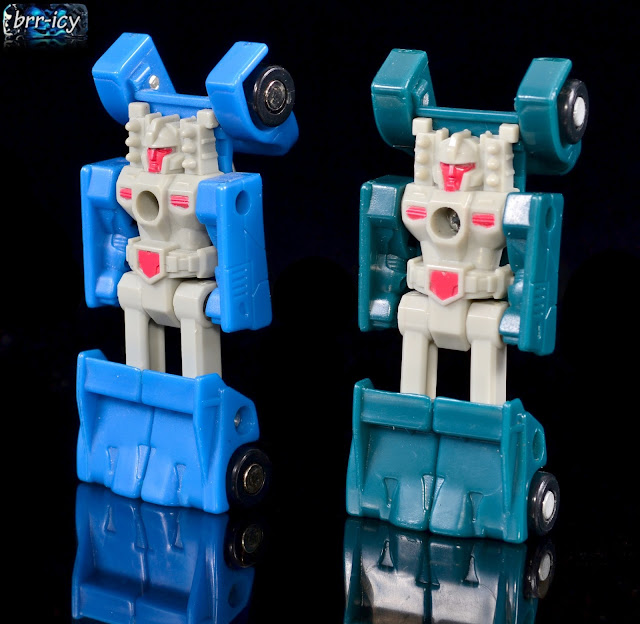 In bot mode, there's no yellowing on the gray at all, same with Swindler below, the gray is normal while the blue is teal. 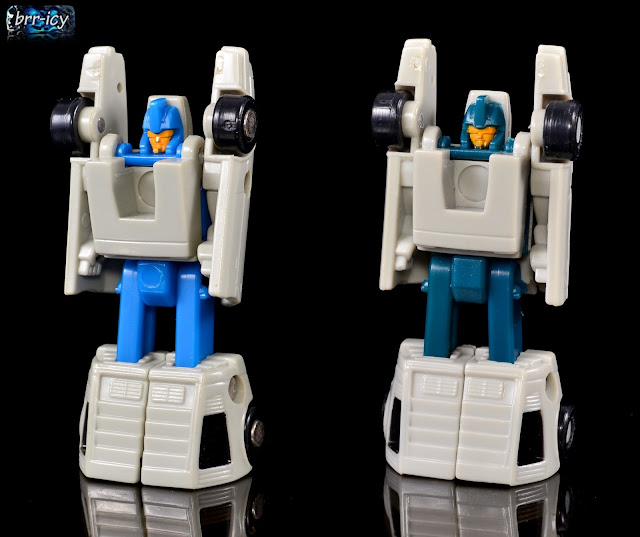 Now, I was shown something in the Zone catalog that comes with Roadfire, where tailspin was white, seen here by Galaxy Shuttle's foot, excuse the crappy pic, I just used my phone. 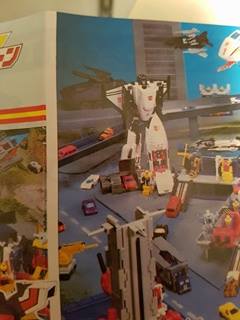 A couple years back, it popped up on YJ in a lot with other prototypes, I didn't know what it was at the time, and lost it. I decided to make my own for my display, and since Micromasters are gang molded, I had to make his brother, which is where a Toyfair ad came in really handy with the colours. They aren't perfect, but they're great in my display. Maybe one day I'll get the real one. 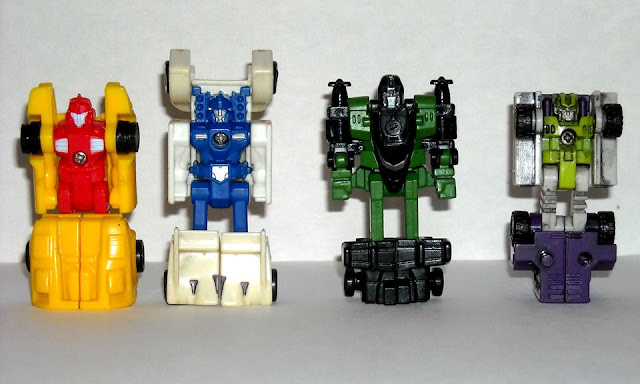 This is a lot of different prototypes, the green chested Knockout was also used for some package art that would have made that set look a lot more Decepticon, the dumptruck would have been all green instead of orange. The yellow on Freewheeler is more orangey than the regular release there as well, and can be seen in the same Zone catalog in a different place. 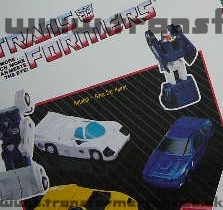 In this photo from an old Toyfair magazine (borrowed from transformertoys.co.uk) you can see the black windows and red face for Swindler, there appears to be more details added to all of them in the picture, so I went with the paint apps that were put on their mold mates only, None of the other repaints got any new paint apps, so I figured that would be as close to the release as it would have been. 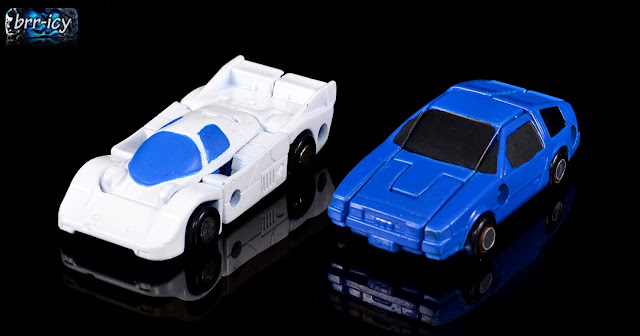 I thought they looked really good in these colours, I wonder if it's because the DeLorean is only sold in bare metal colour that they didn't go with this? 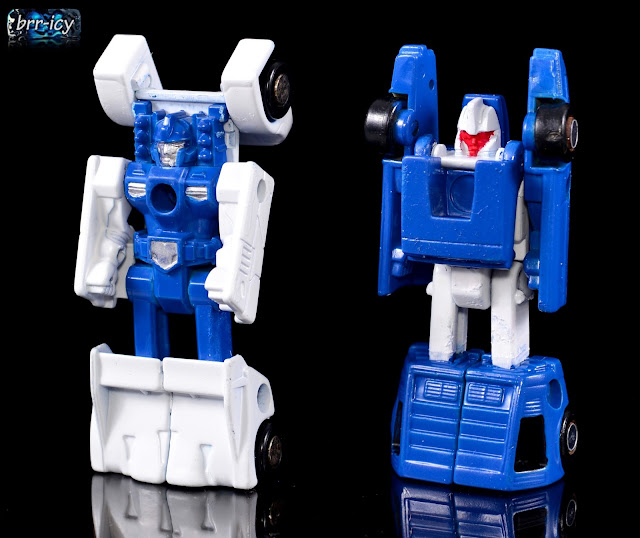 The lot also had a black and green Sunrunner, so I decided to make one for myself, the buyer mentioned it was  the original prototype for Landshaker's partner, hand painted, I didn't bother to paint the green since I would like it noticeable that it's not the real proto. 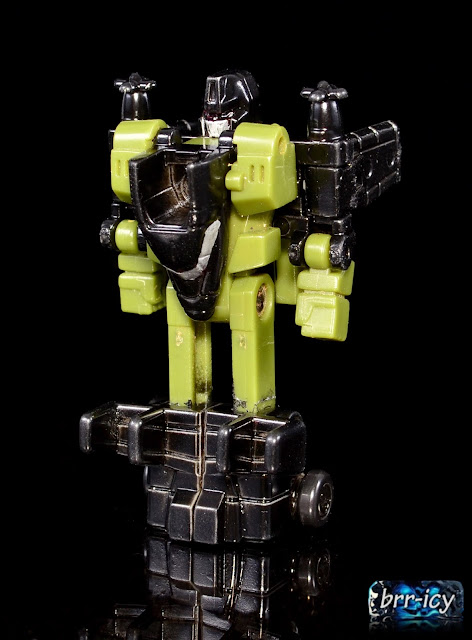 Here's a pic of the original Prototype with the Landshaker tank taken from one of the early Zone catalogs, looks pretty good with it, and makes sense since it's an air vehicle with a land tank, but alas, we got Gunrunner instead, 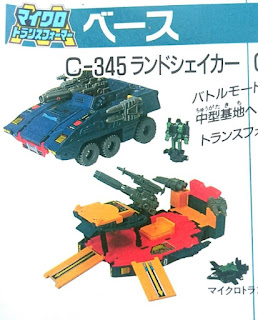 Sky Hyper was slated to come with a Flak/Powerbomb redeco as well, i haven't gotten around to making one, but it seems like an easy little one day project. 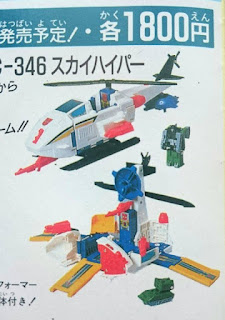 Special thanks to DoubleClouder of TFW for the info and pictures of the prototypes, was fun to learn some new stuff about my favorite subgroup. Got them all set up alongside Sky Hyper and Landshaker in my case now. Pretty happy with this corner now. 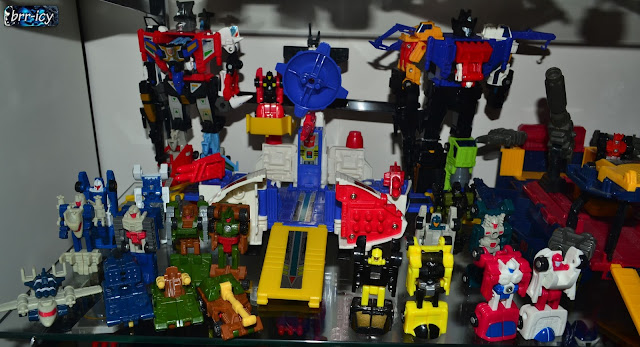