I had to do these two together, Star Saber is my favorite Masterpiece so far, they went above and beyond on the screen accuracy and gimmicks without harming the figure's overall build. Couple him with KFC Simba, and they are amazing together. 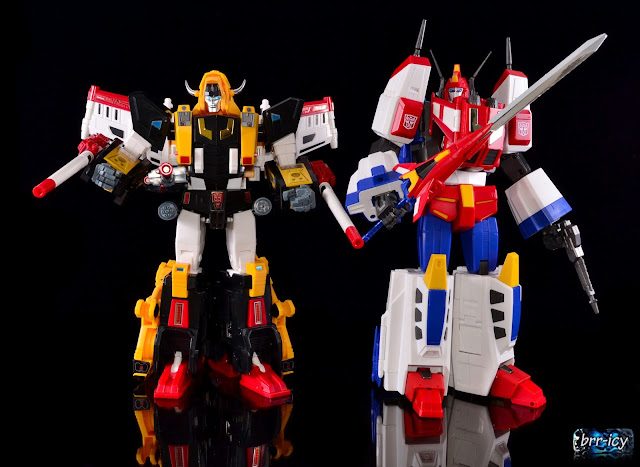 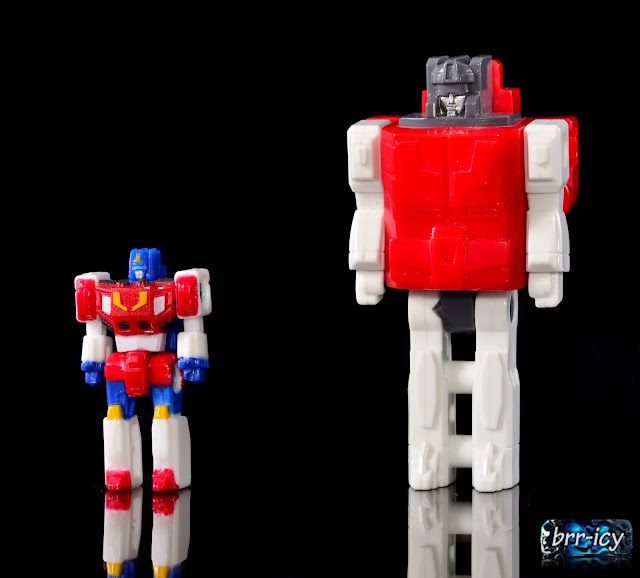 The Masterpiece Brainmaster is much smaller than the original, but much more detailed, articulation is the same minus the the bars between the legs on the vintage. In the show, he walks around as the Brainmaster sometimes, and he always looks like the new one does, I've never seen the original Brain of Courage in the show. 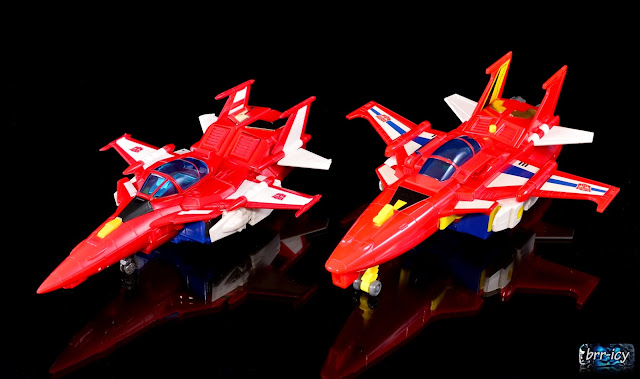 The small jet is Saber, he can hold the Brainmasters in the cockpits. the Masterpiece has the back landing gear built into the feet, whereas the Victory piece has them just built into the shins. They got the new ship bang on the animation model. I like that they made the nosecone split in order to hold the sword instead of having a hole there. 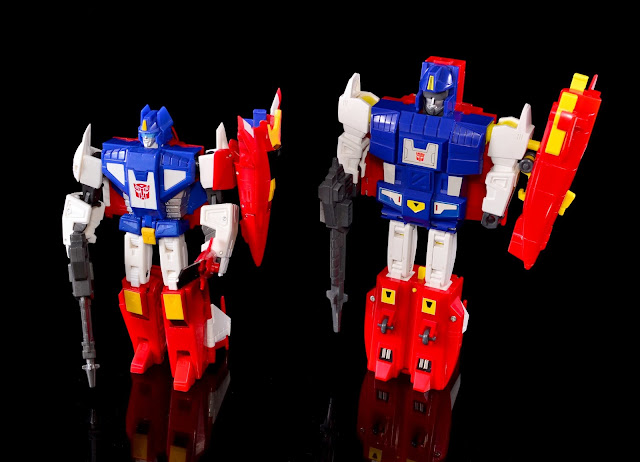 The Brainmasters go into their chests, on the vintage piece, the inner part of the chest of the Brainmaster forms the face of the bot, where the Masterpiece it pushes up a slider face piece, it makes the head actually have articulation. I was surprised they actually added finger articulation to a bot this small. The orignal can use any of the Brainmasters to make the face, something that the new ones won't be able to do since they're built in to the figure.

In full vehicle mode, Star Saber is massive and very futuristic, I love the docking of the small jet with it, and in the show he uses the bigger one as a skiff to ride on, or a ship to rescue civilians, it's called the V-Star. I didn't bother shooting the base mode for it, it's not the best base, lol. On the MP they added rocket clusters underneath the guns on the shoulders. If you watch the transformation sequence in the show, a little part flips up and the sword blade comes out of it to activate the transformation of the V-Star, they even added that on the MP, on both shoulders one for the small bot and one for the large. 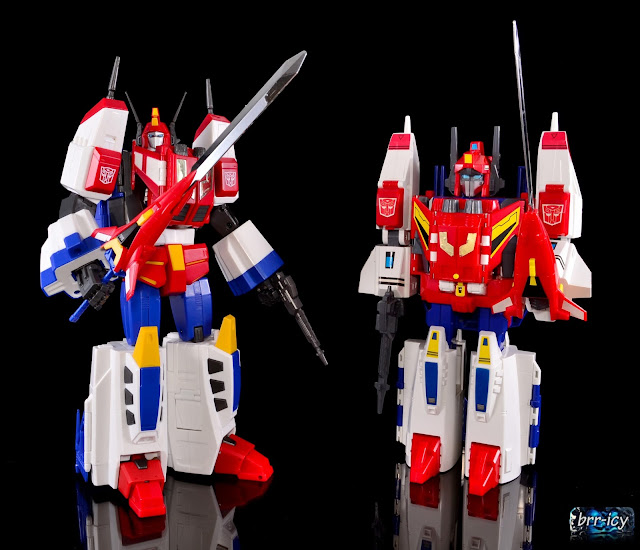 I really like Star Saber's bot mode with Saber forming the chest of him kind of like a Powermaster Prime/Super Ginrai with a flight upgrade. I was pleasantly surprised at the lack of paint on MP saber, with almost all the plastic being molded in the correct colours instead. For the Simba upgrade to be fully functional, I had to get the KFC hands to hold the large gun. but it made the sword much better held, so it was a win/win, and they're not expensive. I love that they added the vents flipping over to be black in this mode and red in jet mode, a touch above and beyond where they had to go. 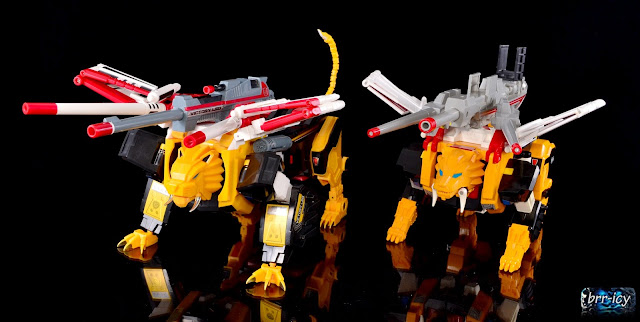 KFC released their version of Victory Leo to go with Star Saber. In lion mode, he's got a ton more articulation, even the front toes can spread. Mine has the Reprolabels set applied to it which brings out a lot of detail on the figure. I love the tail whip they added to Simba, it always weirded me out that there wasn't one on the G1.

In the show, he had a flight mode that the original toy didn't really pull off too well. The KFC version uses part of the flight stand/shield to make a nosecone that makes the jet mode much more fluid and make more sense. The small guns are mounted on flip out pegs and the handle of the large gun flips in so it can peg into the top nicely. 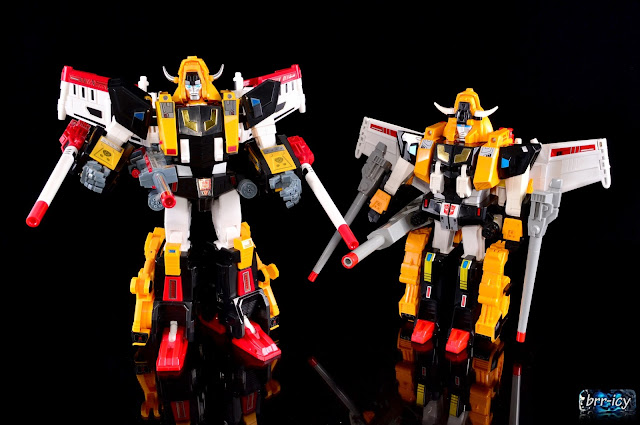 In bot mode he's bigger than the original. I really like that they kept the arm mounted cannons and waist large gun. The original's large gun fired orange missiles, they weren't added into the new one. His gatling guns do extend though, so there's that. His hands came fully articulated so there was no need for them to be upgraded.

The jet modes can combine into a super jet of sorts, I actually had to get a bigger lightbox area to be able to get this shot. I love this mode. It's almost two feet long and about 18 inches from wing tip to wing tip on both figures. The new versions come with a pair of flight stands to make them sit around six inches off the ground, very solidly. The connection is very solid on both, with the vintage having sliding hooks that hook in the foot cut out, and the MP having two spring loaded clips in the same place that lock more solidly than I would have imagined. 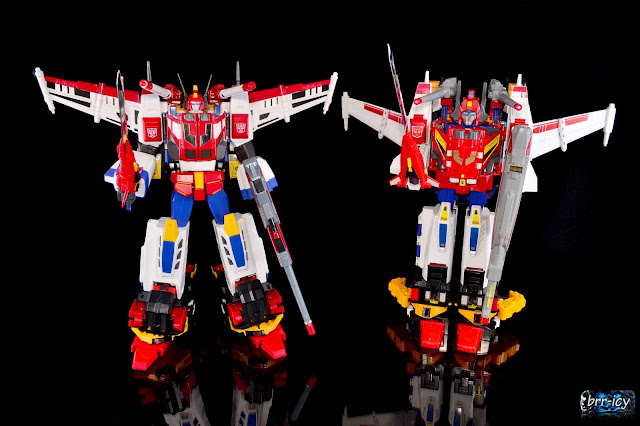 Finally, Victory Saber. he is massive, The vintage one just barely fits in a detolf shelf. the new one doesn't. Maybe when the new joints for the knees come out, he will fit nicer in a pose. There is more heel on the MP version than the vintage, probably because of the extra size on Simba. there's a ton of articulation points they didn't need to add, the wings can raise at the base, the tips can swivel, two points on the mounts for the shoulder cannons etc. The only draw back to the new one is the small shield that splits to cover his feet in combined mode and lock everything together, the vintage's solution to that was ingenious, with the plates that slid out of the legs and snapped over Star Saber's wheels. All in all, two of my favorite figures from G1 and Masterpiece. hope you enjoyed my mini review. 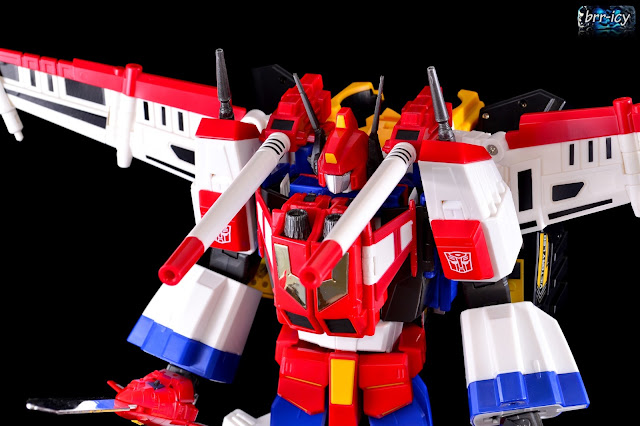