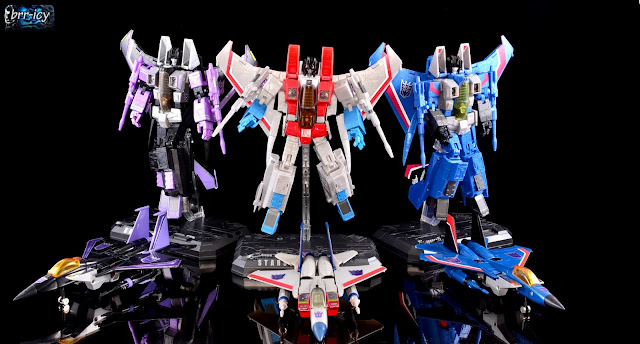 After getting Skywarp yesterday, it's finally time to do a quick Updates post on the trio. There's a lot of extra stuff built into the Masterpiece mold that wasn't on the original, and more gimmicks than you can shake a stick at. 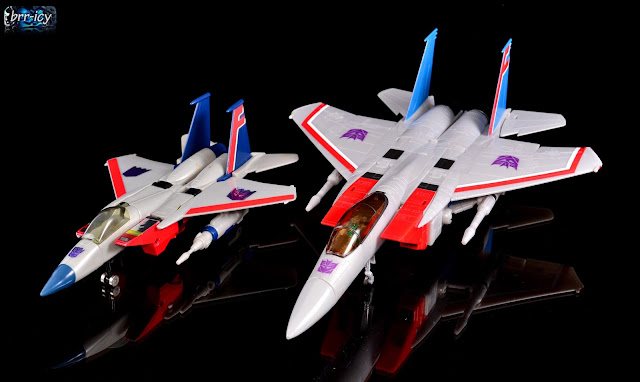 We'll start with Starscream, I have the Takara Coronation version as I love how over the top he was in the movie with the whole ceremony and whatnot, but I'll get to that later. In jet mode, there's a ton of gimmicks, 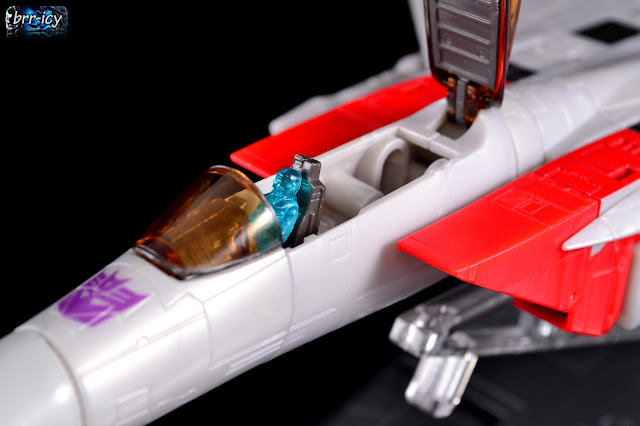 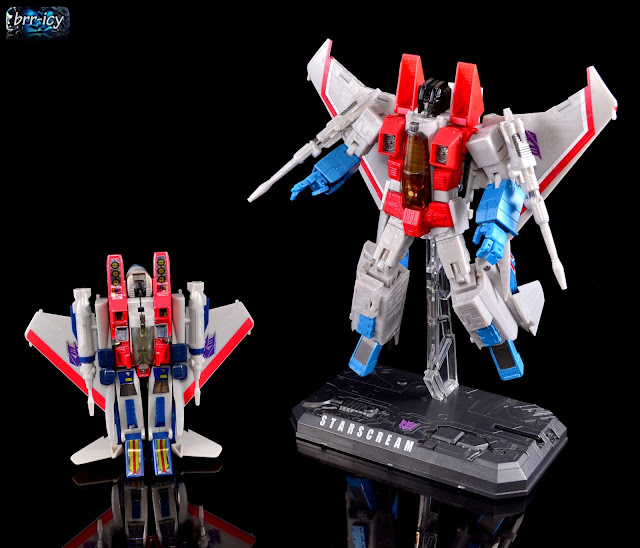 I kept the stands from my MP-03 Starscream and MP-06 Skywarp when I sold them, didn't make sense to sell them off. In bot mode, Starscream very well articulated, and I really like the fact that they made this mold have non removing null rays. The G1 figure has a darker blue, but the show went with the lighter colour that is on the Masterpiece. 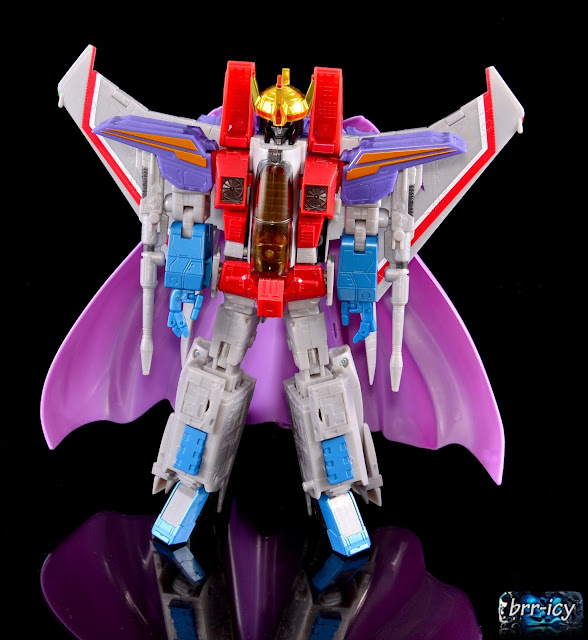 Because I went Takara, I have this set for his Coronation scene in the movie. I love how they pulled it off with the cape folding in on itself for this mode, and you can make it flung out like when he's yelling about it getting disrupted. 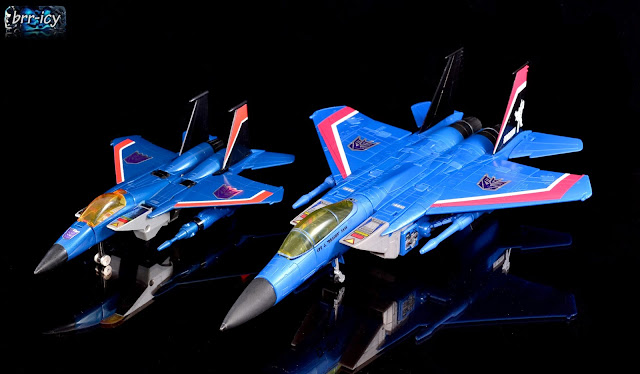 I went for Hasbro TRU release Thundercracker, I love the dark metallic blue of the original toy, and this is fairly close to that. There's some extra tampographs that I would like to remove at some point. 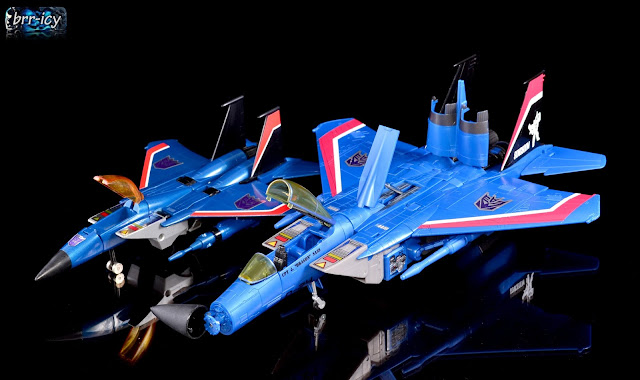 The alt mode has a lot of other gimmicks that I didn't mention earlier, like the radar on the front, retractable landing gear, opening engine bays, poseable flaps, and even the airbrake. The original had the opening cockpit for the Diaclone driver. A lot of the original figure was parts forming with the wings, guns, fists, and front landing gear being removable. It's still a nice figure, but there' a pretty big difference in engineering. 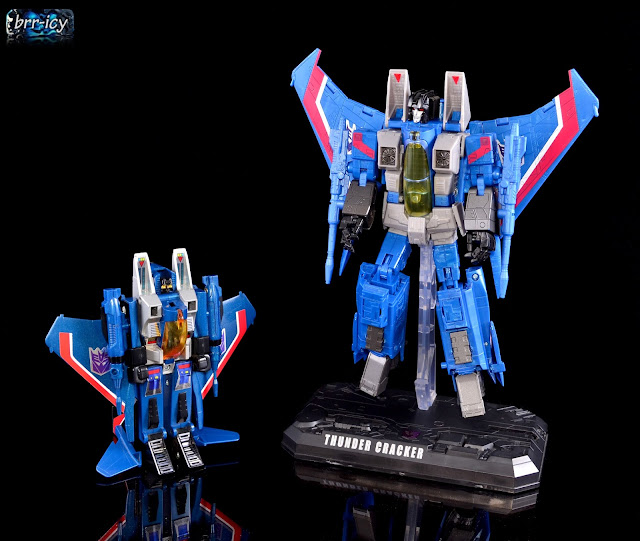 In bot mode, they both look great, The Hasbro one adds some of the sticker detail to it that is missing on the other two, but I don't want to break down and get the Takara powder blue one, 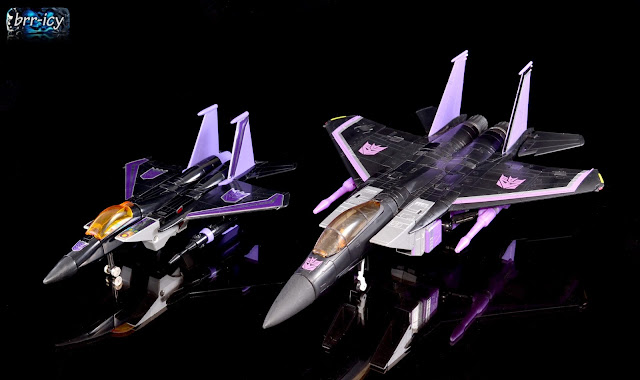 Skywarp looks amazing I think, between the metallic purple and the black, he's close to the colour I would like on him. 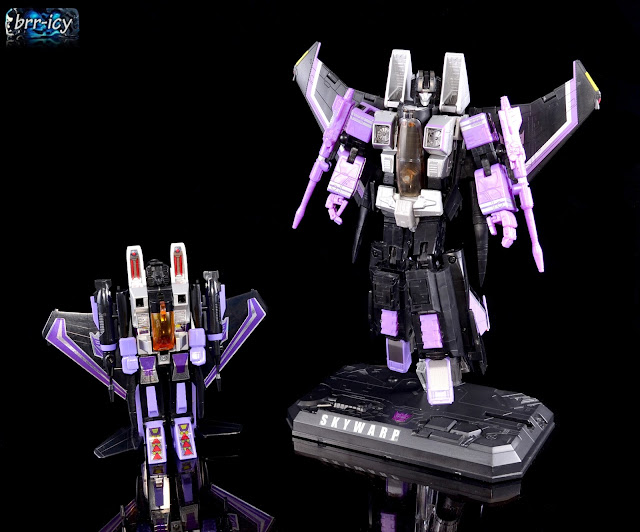 In bot mode you can really see the purple and just how nice the figure is in general. Nice release by Hasbro Asia, not sure why we didn't get a regular MP release, but I'm glad it's here, now just Dirge to get here and I'm done with the Masterpiece Seekers. 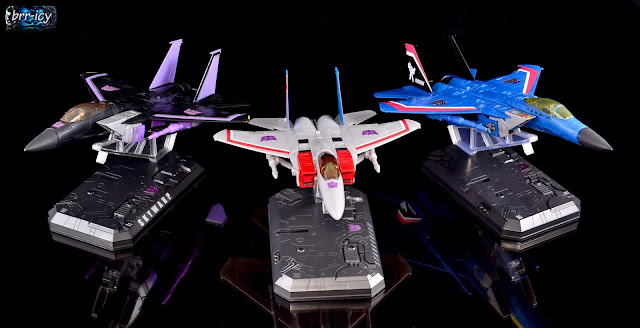 This is the main reason I needed to keep the stands, being able to pose the figures in flight is pretty cool, plus being able to transform it into a hovering stand for bot mode. I think I might break down and get the set of KO stands for my coneheads, not sure yet though.
Posted by Brr-icy at 19:42