I finally constructed the last piece I needed for this review, I had been missing a Sixturbo rifle for the vintage one for a while so I made one as close as possible for now. 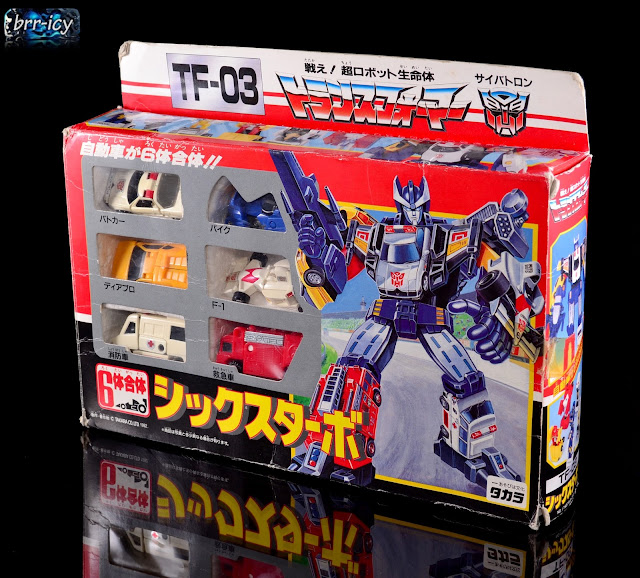 Not the easiest piece to find, I need to move the police sticker around I think, not sure.

Circuit is the F1 racer of the group. Like most of the Sixteam combiner reissues, he has paint where the vintage has stickers. I do like the little Auto Bot sticker on the vintage one. The red on the front spoiler is missing on the vintage. 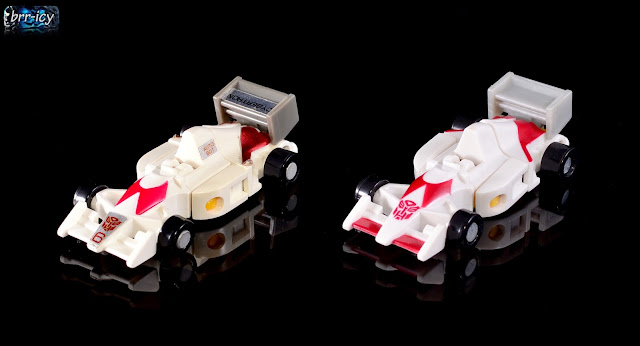 The red at the back of the car is a sticker on the vintage where it was painted on the vintage. The vintage has a darker gray and blue face while the reissue gains a silver belt. 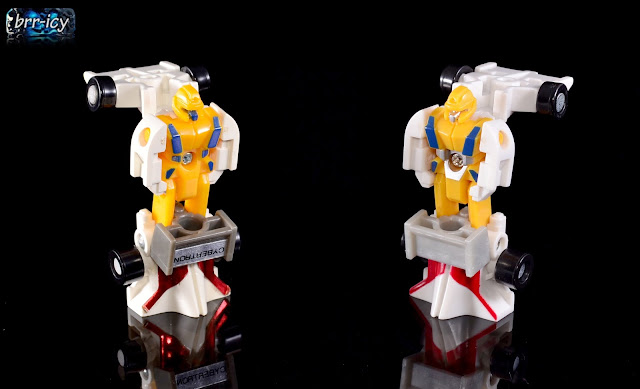 Discharge, yes, Discharge... haha. Where do they get those names? He's a red firetruck. The vintage has stickers on his lights, front window, and sides of the truck. Where the reissue has silver paint on the sides plus a bot logo on the side.

In bot mode, he's got some big feet. The reissue gets a silver face and details, where the vintage has blue, the red is also a shade lighter. 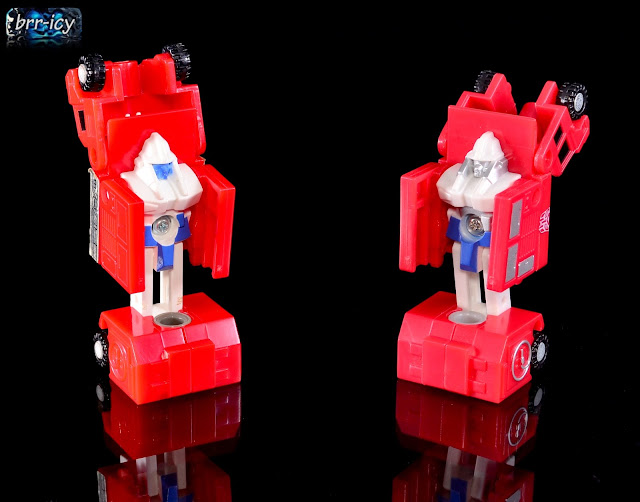 Glide is the only Micromaster motorcycle. I really like the mold. the bike is pretty accurate. In bike mode the front lights and window are stickers on the vintage while they are paint on the reissue with paint on the pipes and a bot logo on the side. 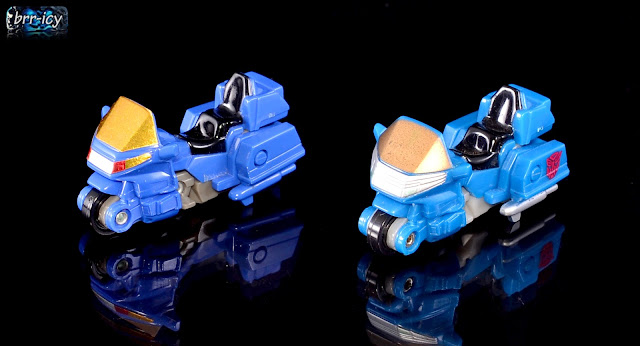 The bot mode is pretty well done for a bike, probably in my top three for bike Transformers with how it looks. 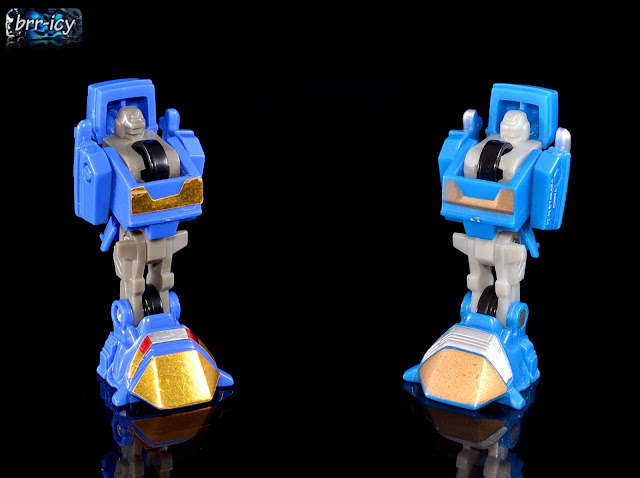 Neo-Wheel is the Lamborghini of the crew. Some of the windows are stickers on the vintage, and they added a bot logo to the reissue. The yellow is also a darker shade on the original.

In bot mode it looks like legs are separated on the vintage, that's just it being loose, I need to replace it one day, might just do the whole set and call it a day. The reissue gains a few paint apps, swapped the silver for gold on the crotch, silver abdomen, and a gold head crest. 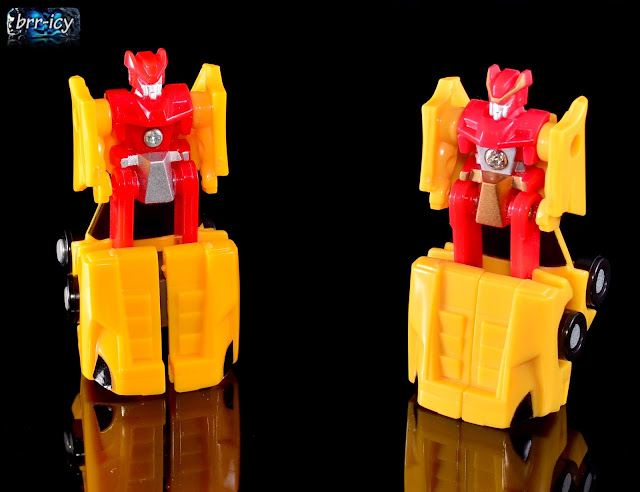 Road Police is the police car of the group, his windows are stickers on the side, and the police sticker should be on the back of the car, I haven't moved it.

The bot mode is awesome. I love the little police hat on him. The vintage has a yellow crotch and face, while the reissue has a black crotch, fronts of arms, and silver abdomen, face, and... suspenders 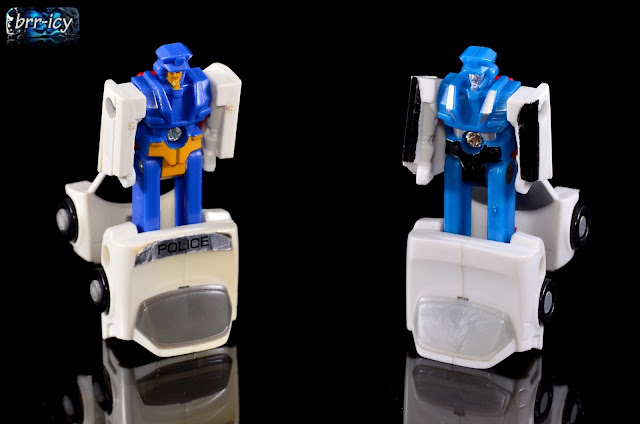 Sireen is the ambulance of the group, He's one of the neater micros in my opinion. The windows, headlights, and ambulance sides are all stickers. 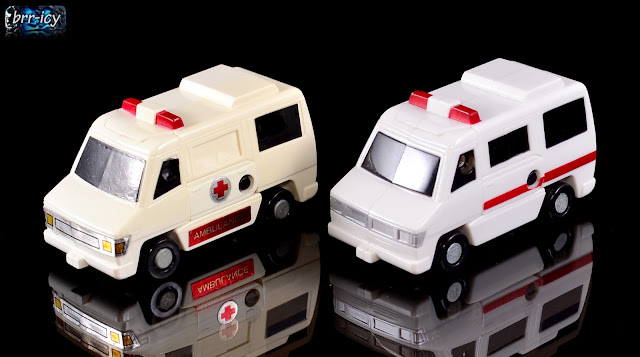 In bot mode, his transformation is different than most, it leaves the head a bit obscured, but still good, the face on the vintage is yellow while it's silver on the reissue. The side of the chest also gains the silver. 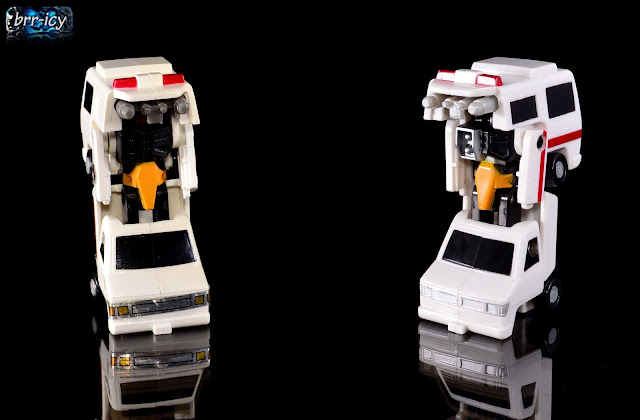 We'll go over the differences on the combiner parts in a minute.

Finally, Sixturbo. The blue on the vintage combiner parts is darker. and the thighs, gun, feet, and chest wings have stickers on the vintage where the reissue is painted. He's probably the least proportionate of the six teams combined, but I really like him individually. 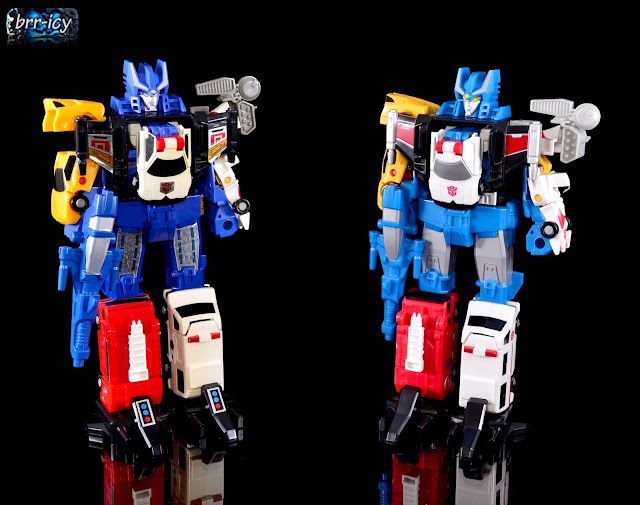