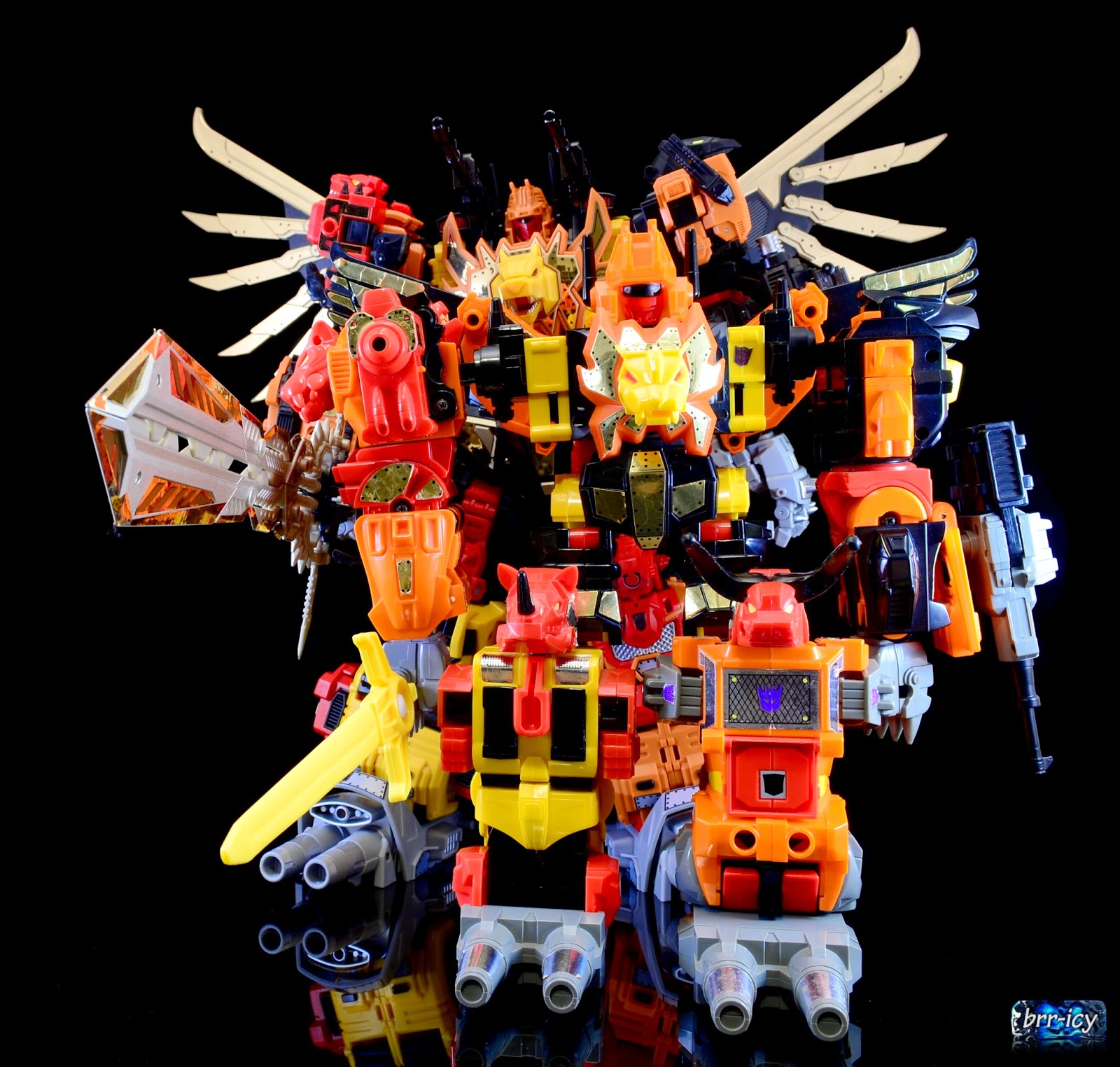 at the request of Maz, Upgrades with Feral Rex and the Feralcons. This immensely popular 3rd party set of figures from Mastermind Creations was very well received by the fandom as a whole. Mine has been completely Reprolabeled, the gold chrome highlights just make the figure pop even more.


We'll go by release order to keep things simple. First up is Tantrum and Bovis. The beast modes I actually prefer the G1's proportions. But the articulation and detail on Bovis is pretty insane. The foot becomes a pair of cannons for the beast modes. 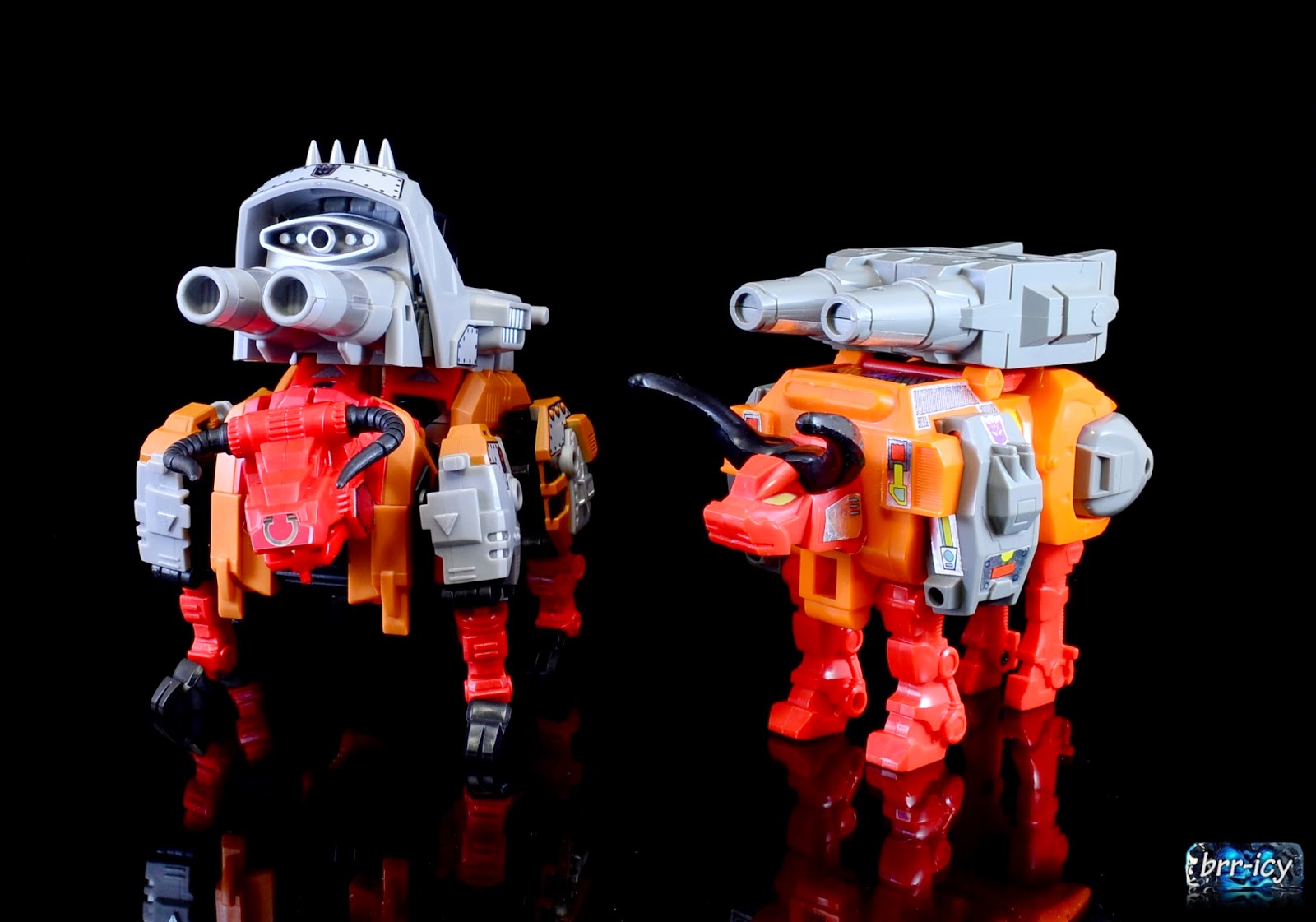 The Feralcons all come with two swords/daggers and a gun or two. The G1 limb bots all come with two guns and a sword, with Razorclaw coming with a single large cannon and a sword. In bot mode, The G1 figure is notably less articulated, but it is also has less kibble since the rear legs collapse into the legs. Bovis' bot mode is very well proportioned and articulated. 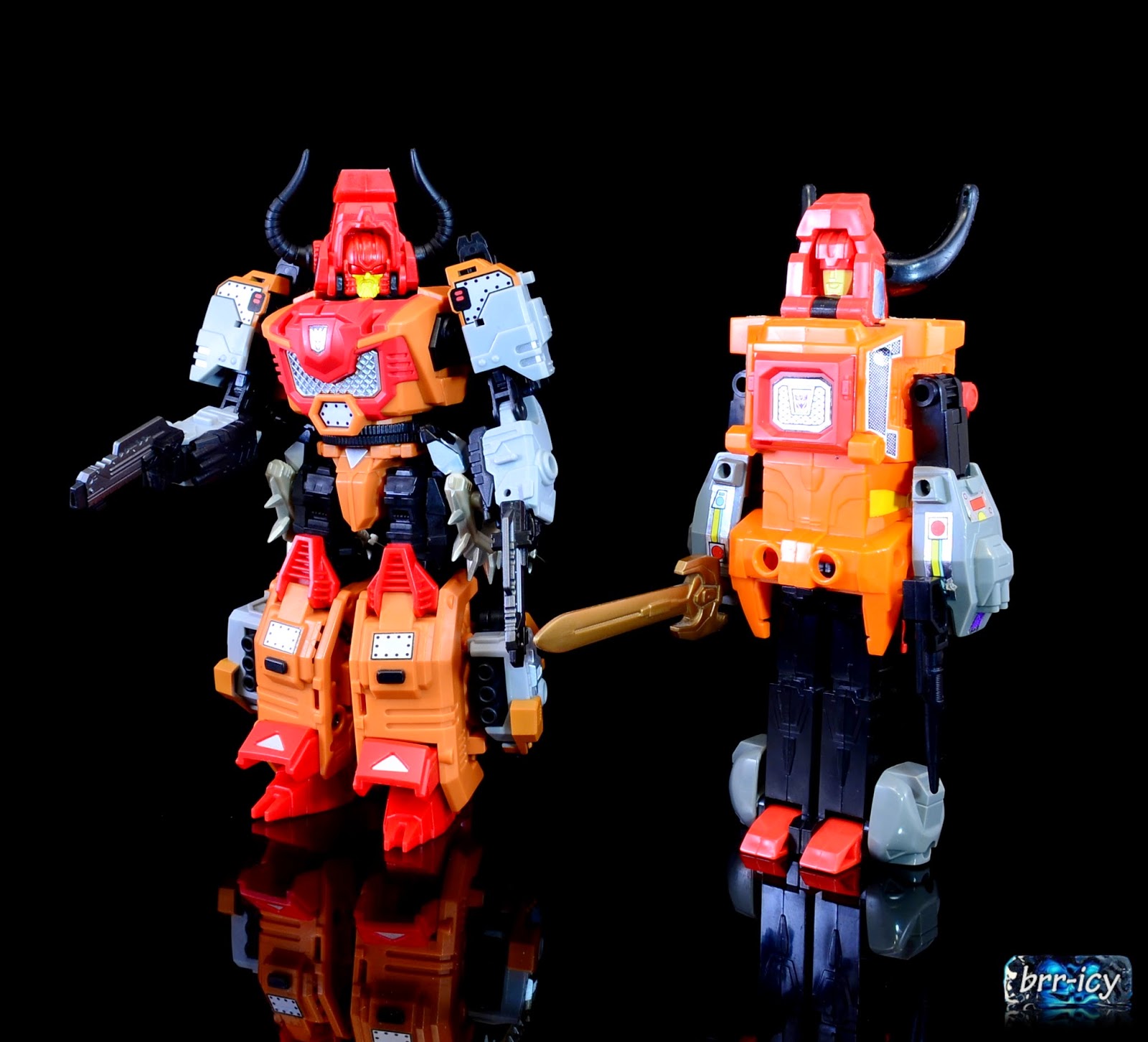 Next up, the other leg, Headstrong aka Fortis. In beast mode, the G1's legs being close together helps the look of it. Like Tantrum, he uses the foot as a back cannon. 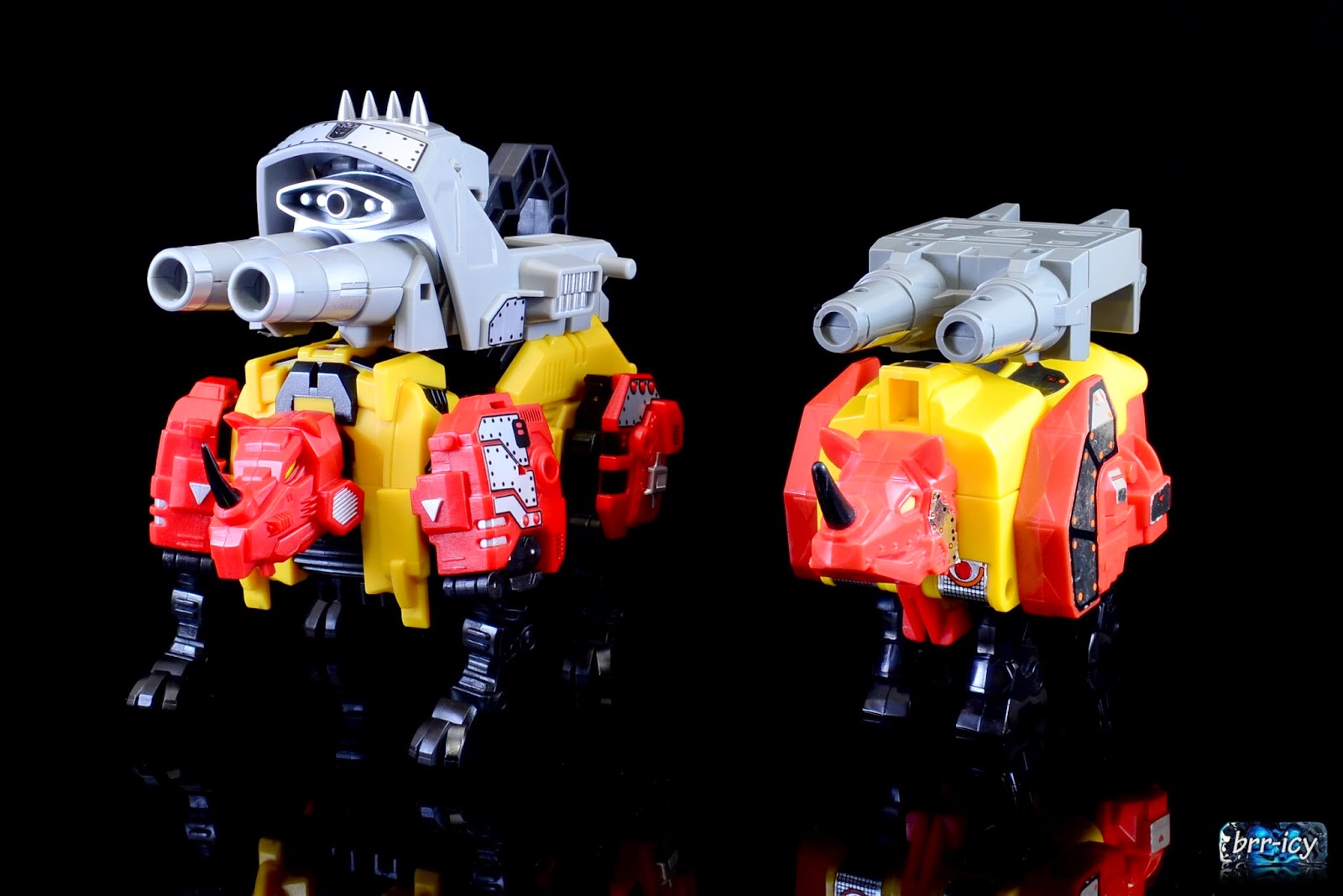 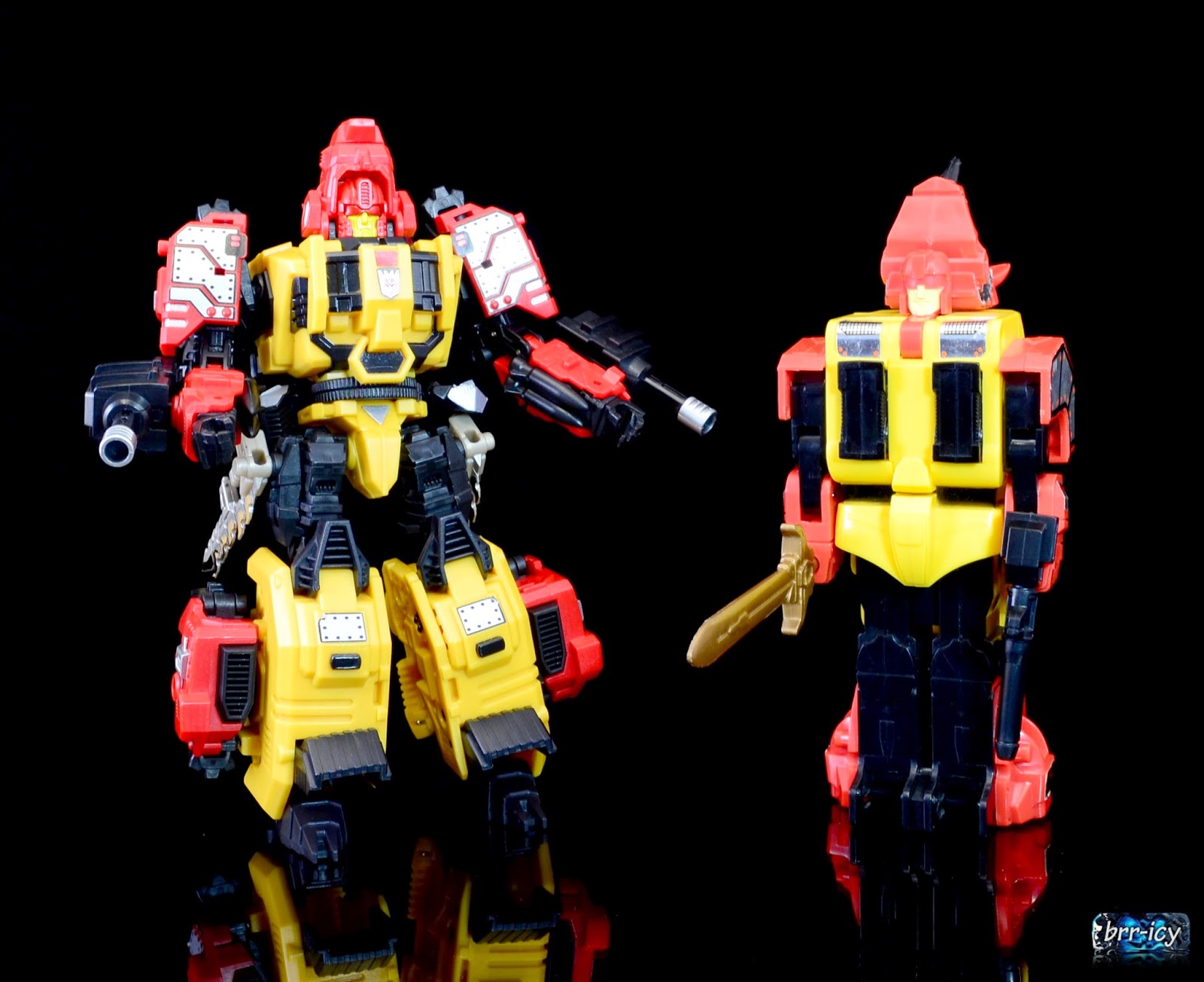 Next is Razorclaw aka Leo Dux. I love how accurate he is in both modes. 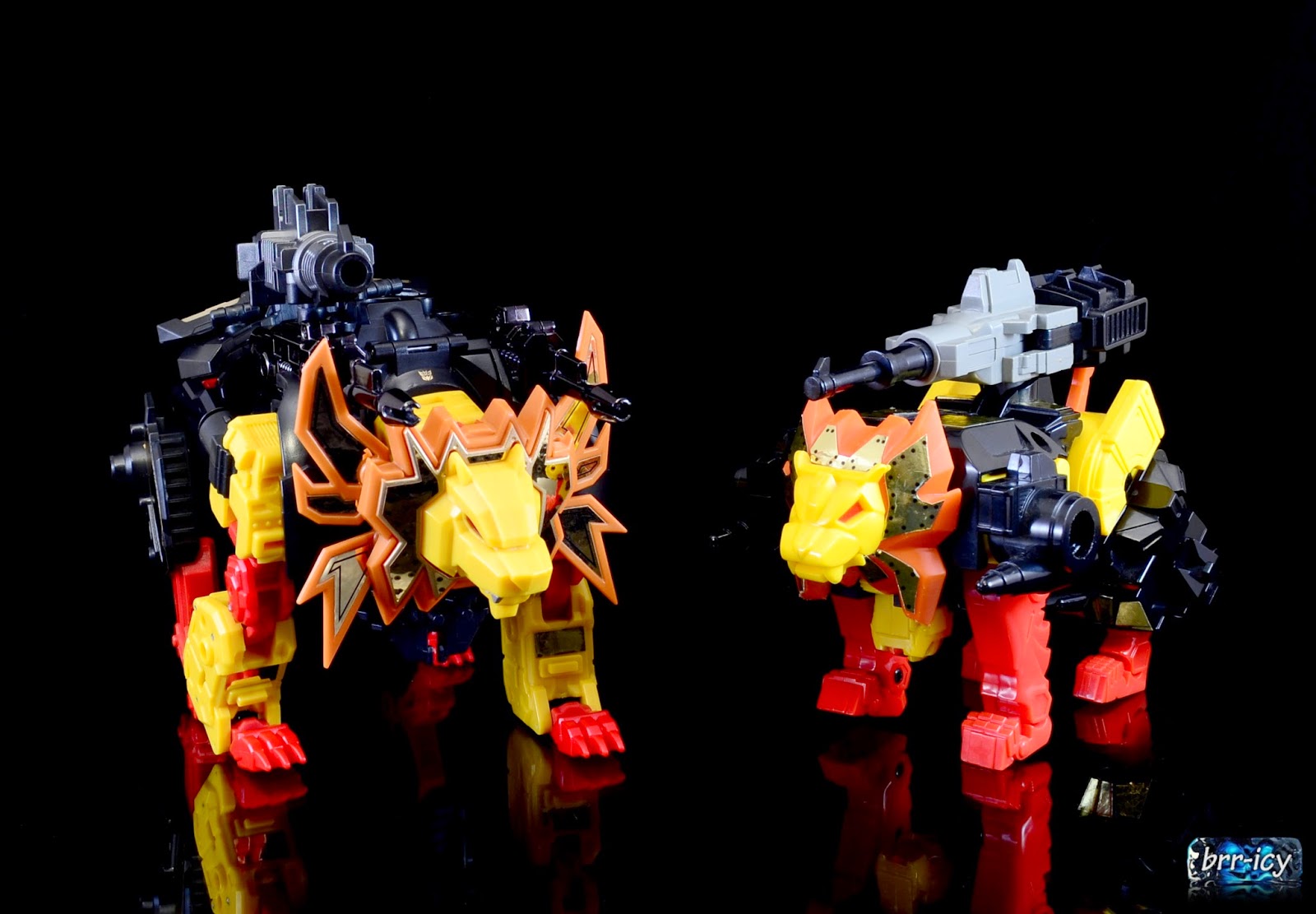 In bot mode, he looks extremely dangerous with the two giant cleavers. 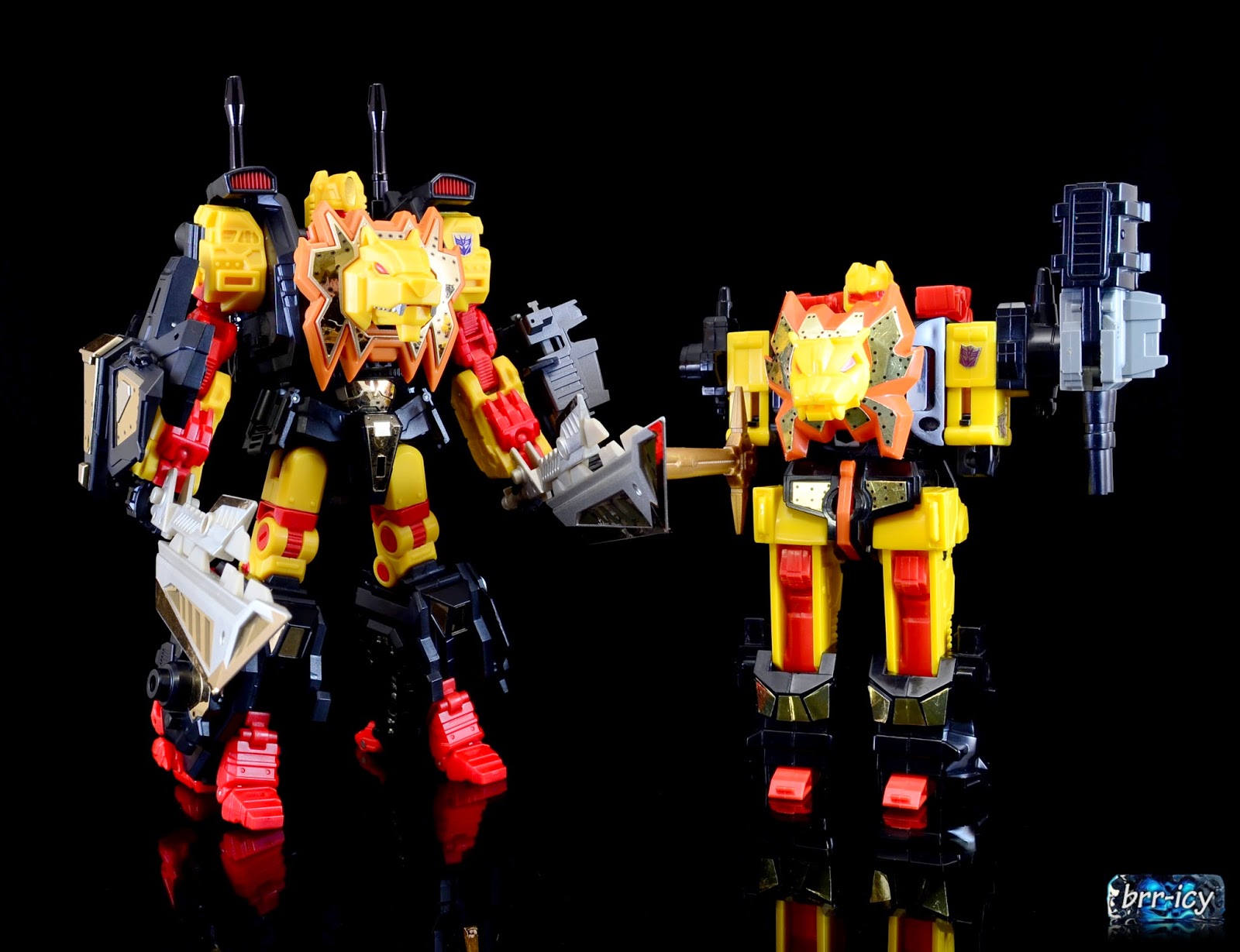 Divebomb aka Talon came out next. The wings on Talon are amazingly well done. The look of the spread feathers is pretty nice looking. He has a huge wingspan. This is one thing I debated getting the Crazy Devi set for, but decided against it, no upgrades for my G1 collection. 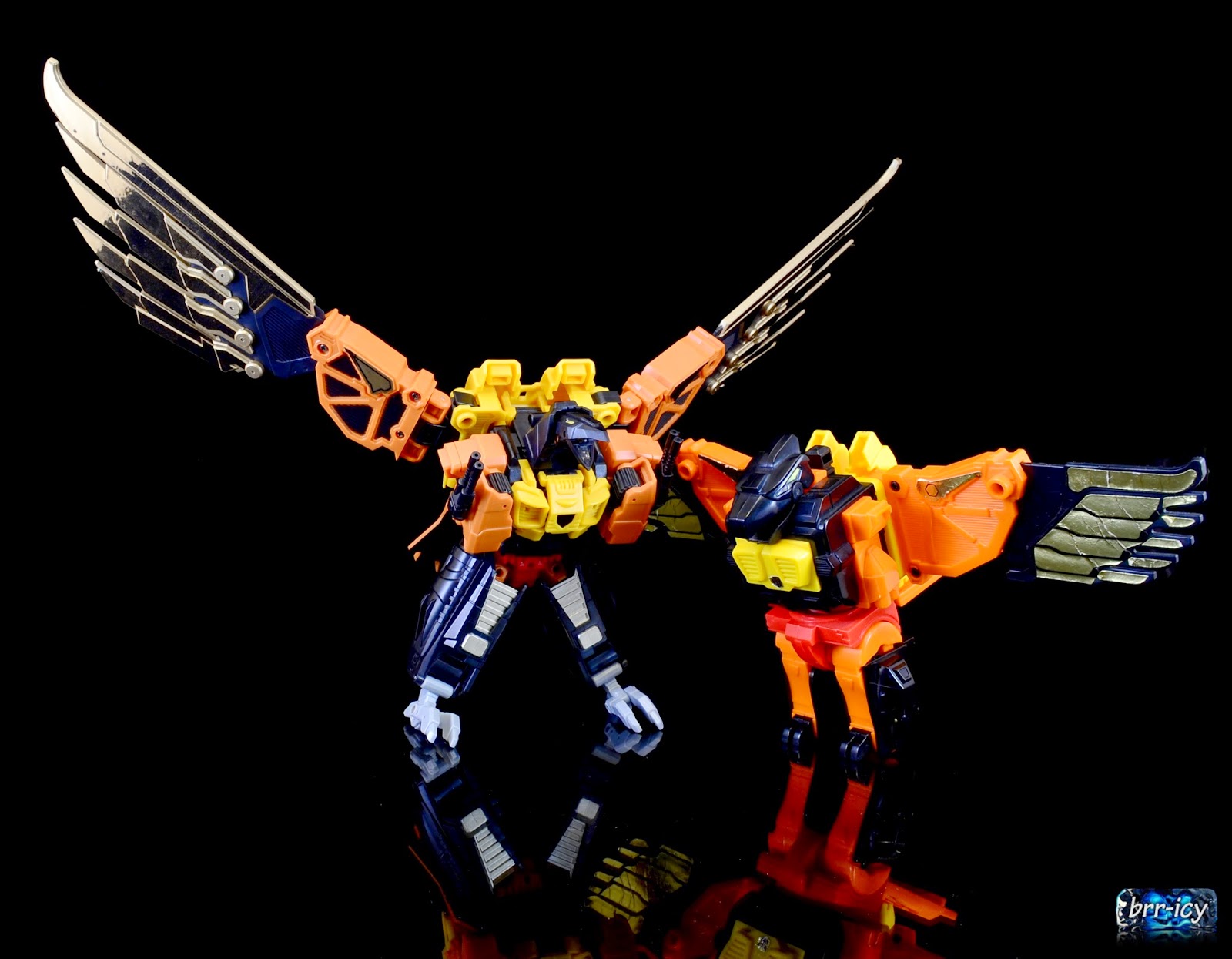 Bot mode is nice and skinny looking which matches his avian mode nicely. He's equipped with a sniper rifle. 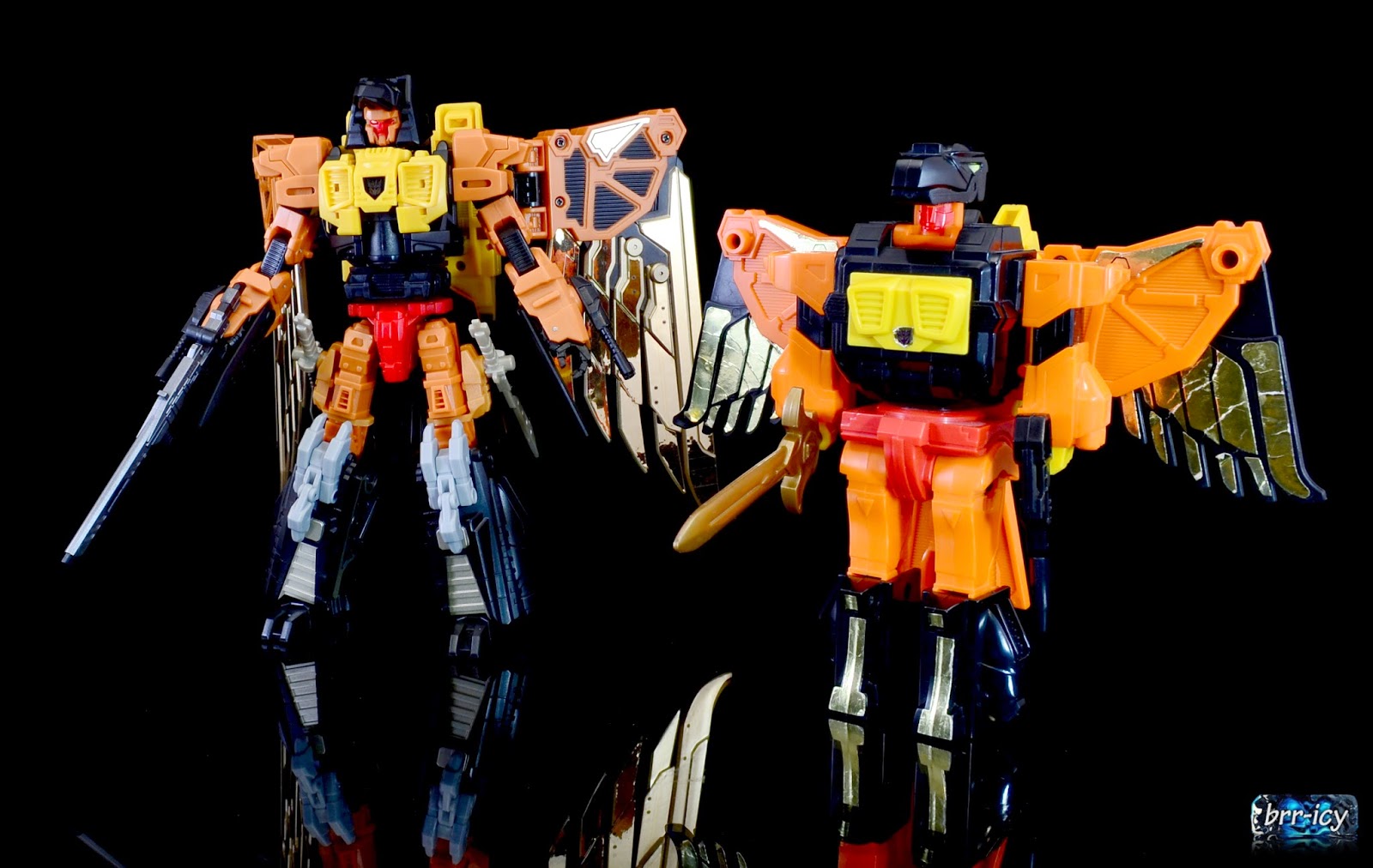 Lastly, we got Rampage aka Tigris. The cat mode is pretty well done. 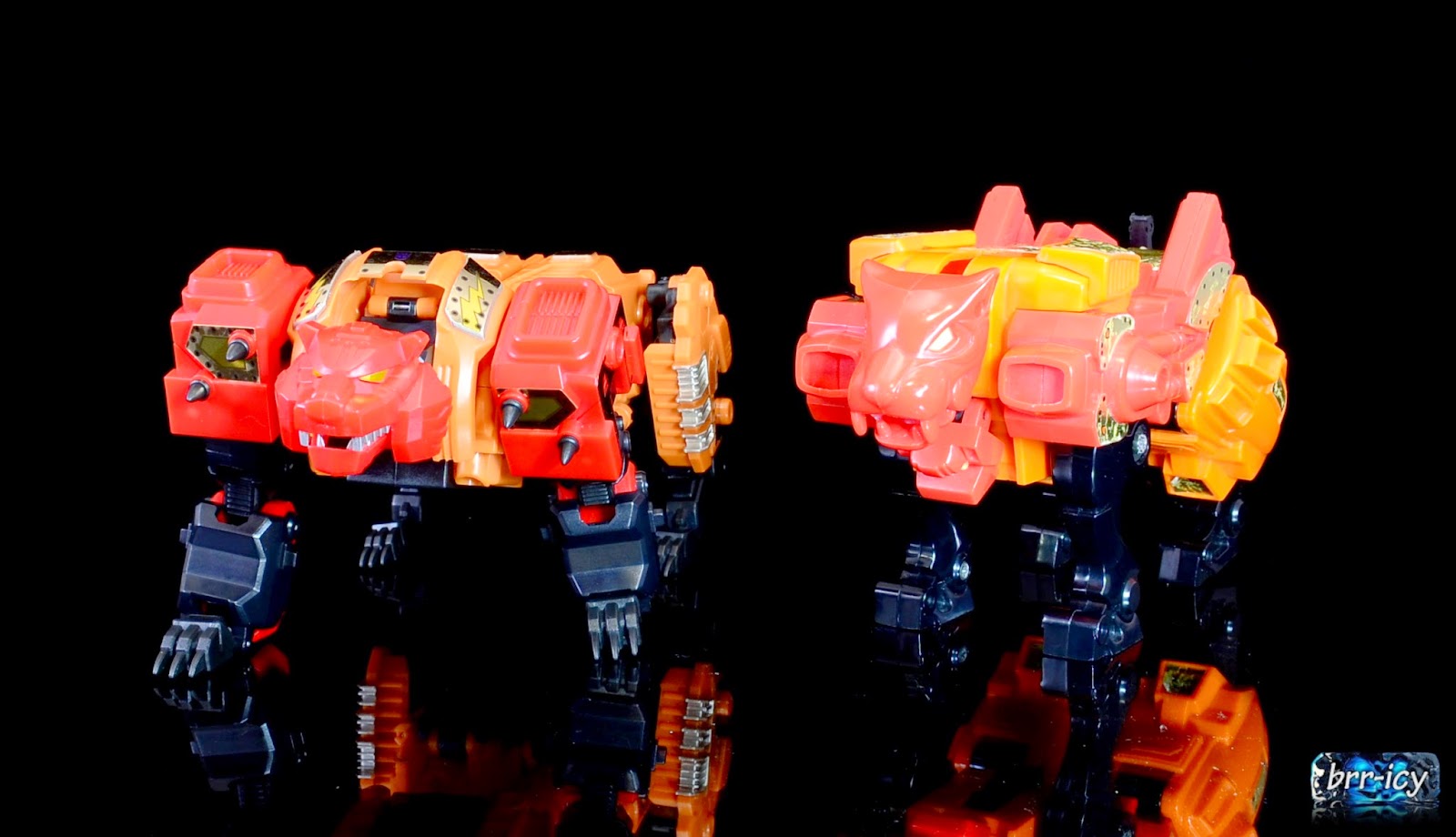 In bot mode, he matches Talon with the lithe looking bot mode. The rear legs of the G1 collapse into the thighs to hide them nicely. 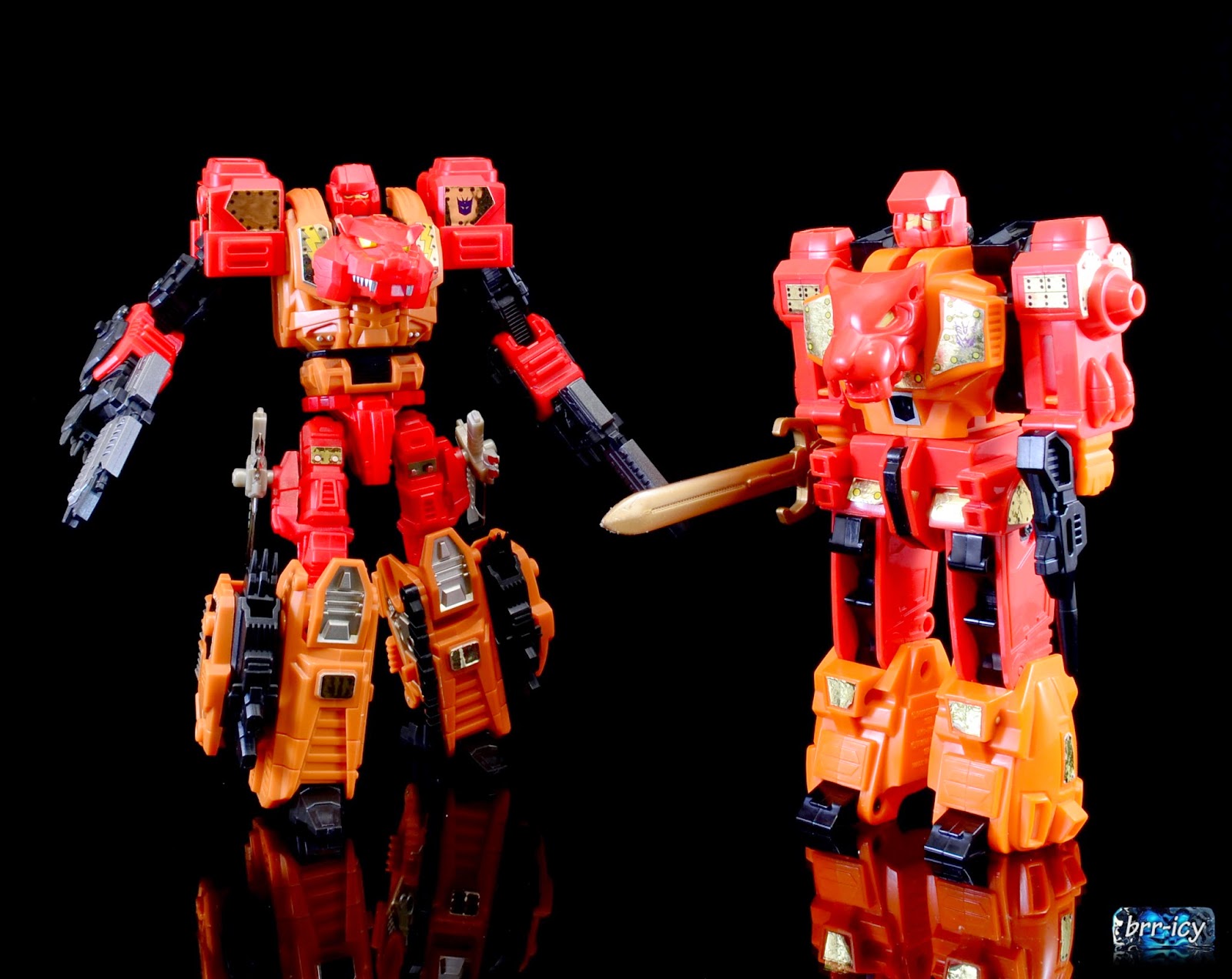 Other than the top pic, I couldn't fit the pair in the light box. so here's separate pics. The G1 figure is pretty big. wings look undersize, but other than that, he's a pretty good looking combiner. The sword came from a lot from Scotland, no idea what it's for. 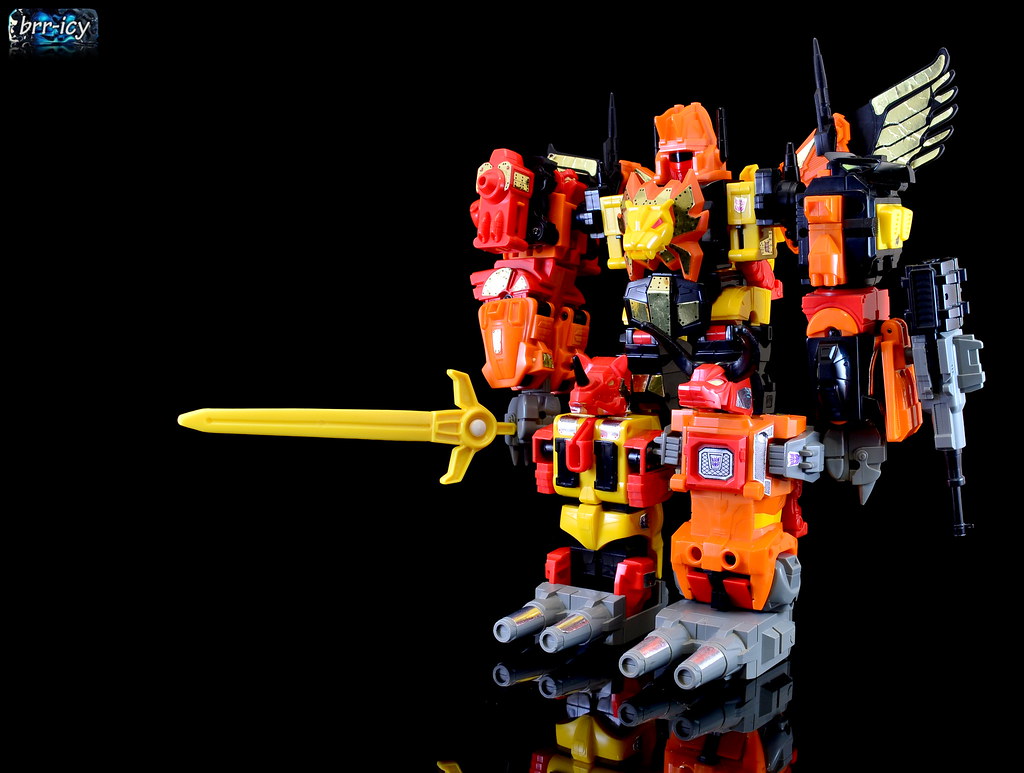 Feral Rex comes out on top for looks though, very impressive and a lot bigger than the original. I would say that it's a little unstable though. It takes a few minutes to get into a pose I would consider solid. The sword is pretty overkill, neat looking though. I like that the guns from all the feralcons combine to form the arm cannon for him. The gold chrome all together on the combined mode is really nice looking, one of my favorite Reprolabels sets of all time.