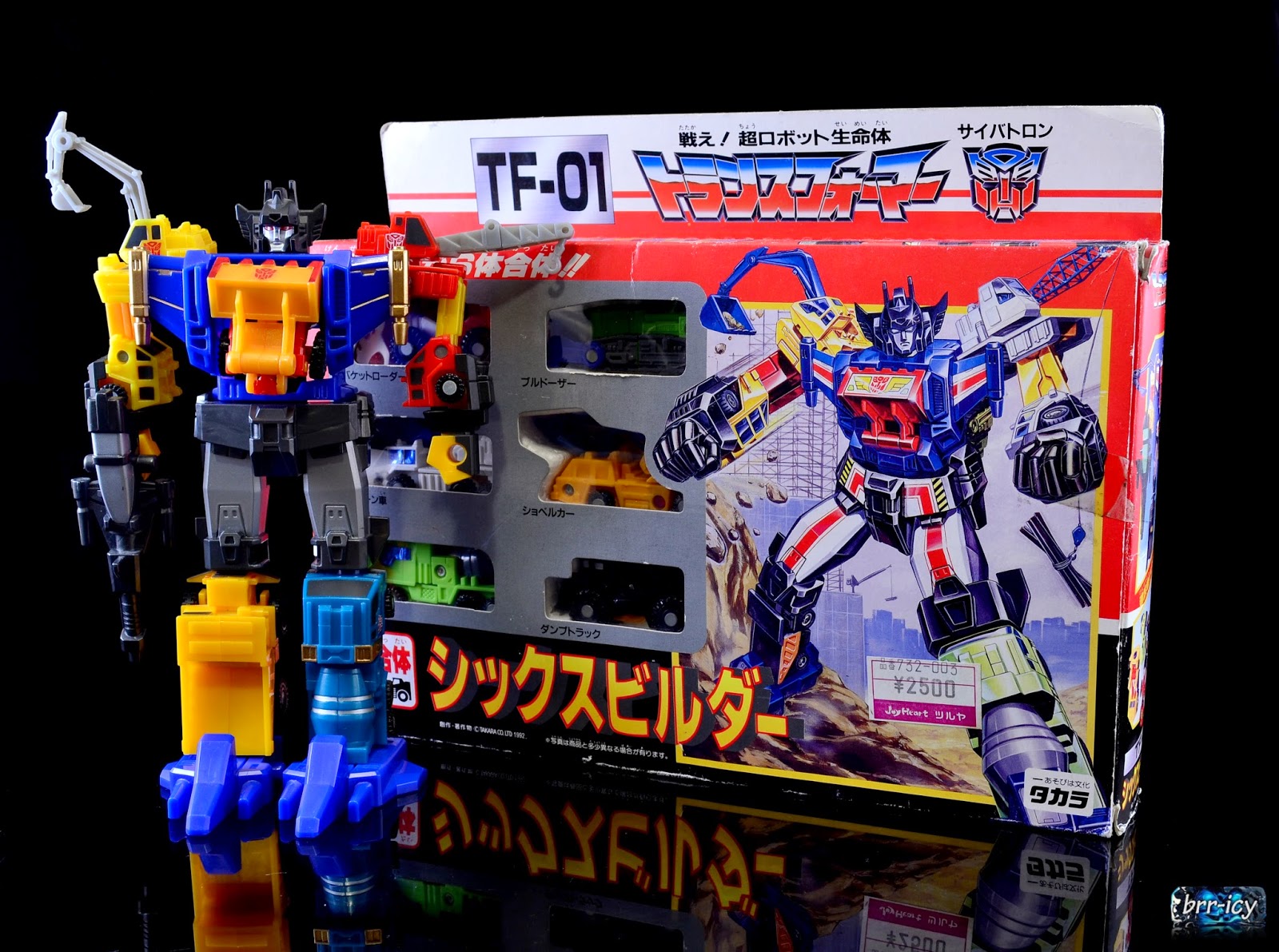 Another year, another TFcon, got to meet up with most of the people I was trying to, missed Angry Canadian Decepticon though, we'll get to meet up sometime. Picked the vintage version of this guy up at the show. It ended up being one of like three G1 pieces I grabbed, pretty light on the vintages for me.


We'll start with Crush Bull. His original colour scheme was very Constructicon-esque. They changed it to a more dark turquoise for the reissue. His blade moves up and down, so there is some playability in alt mode. 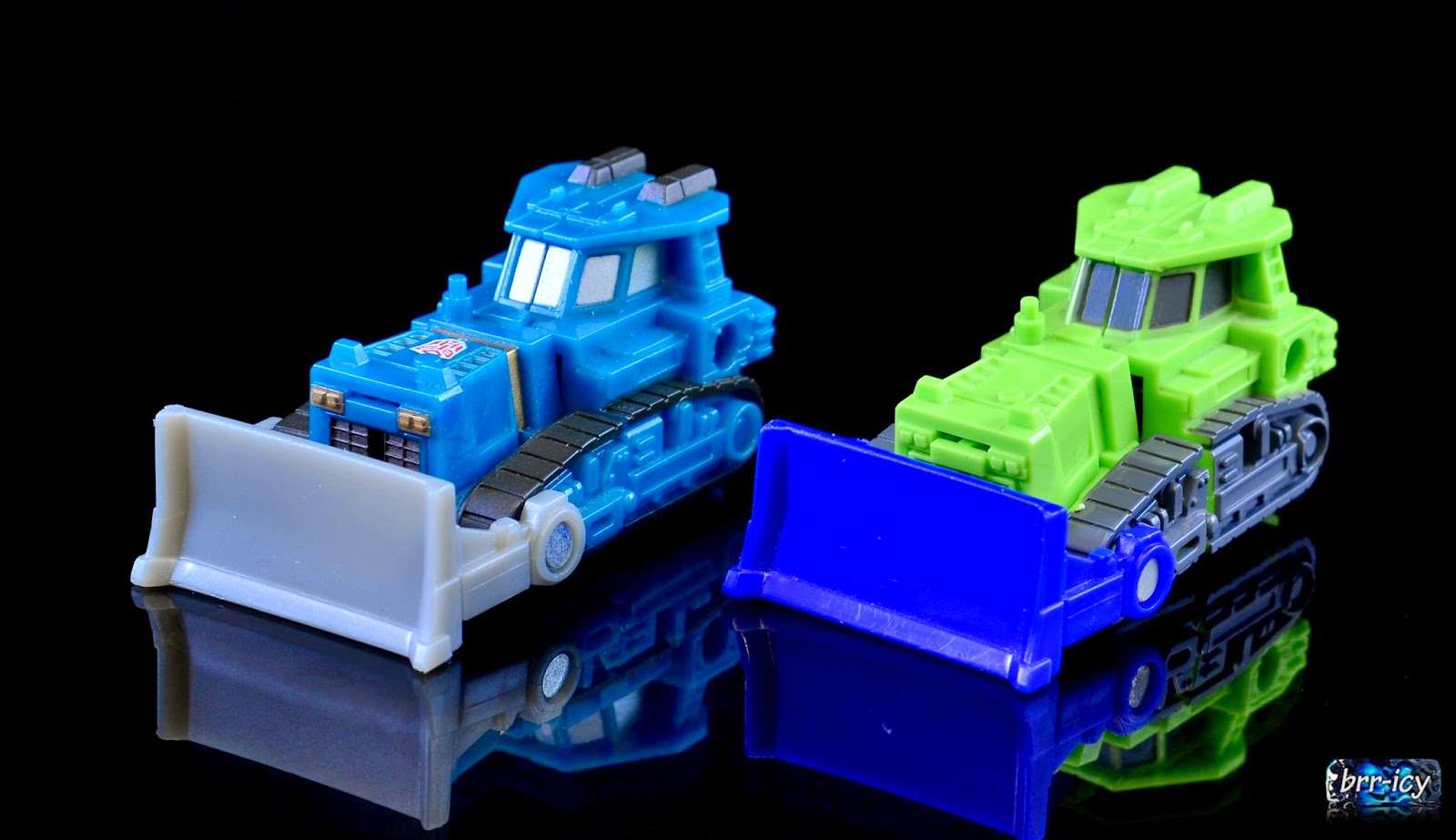 He basically stands and stretches out, with the grill opening up to reveal the head. He's the figure that forms the back of the combined mode. 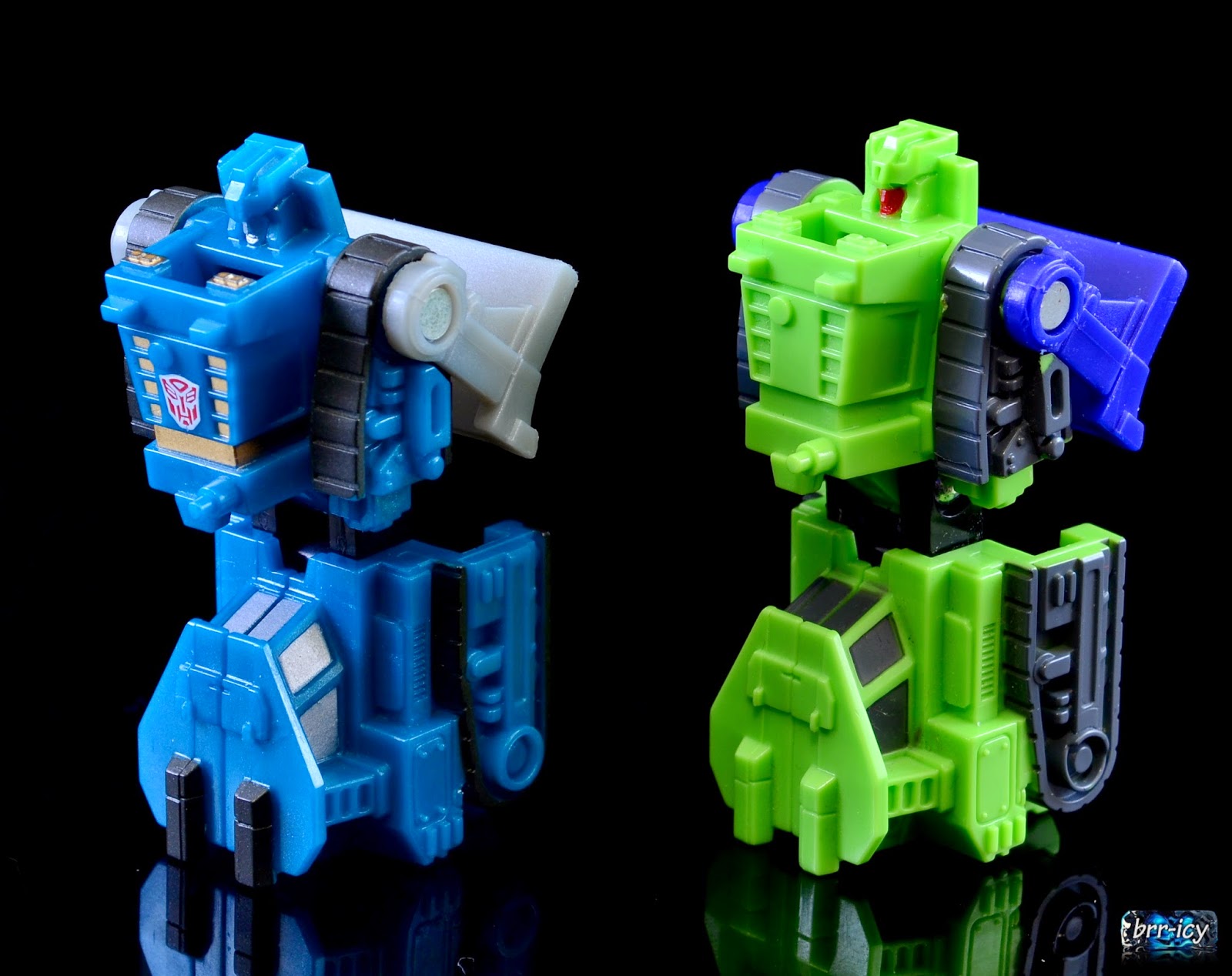 Next, we have Digger. His reissue version got a more lemony yellow and the blue toned down to gray. He's the right arm of Sixbuilder. The digger arm is articulated in two places and the base can swivel. 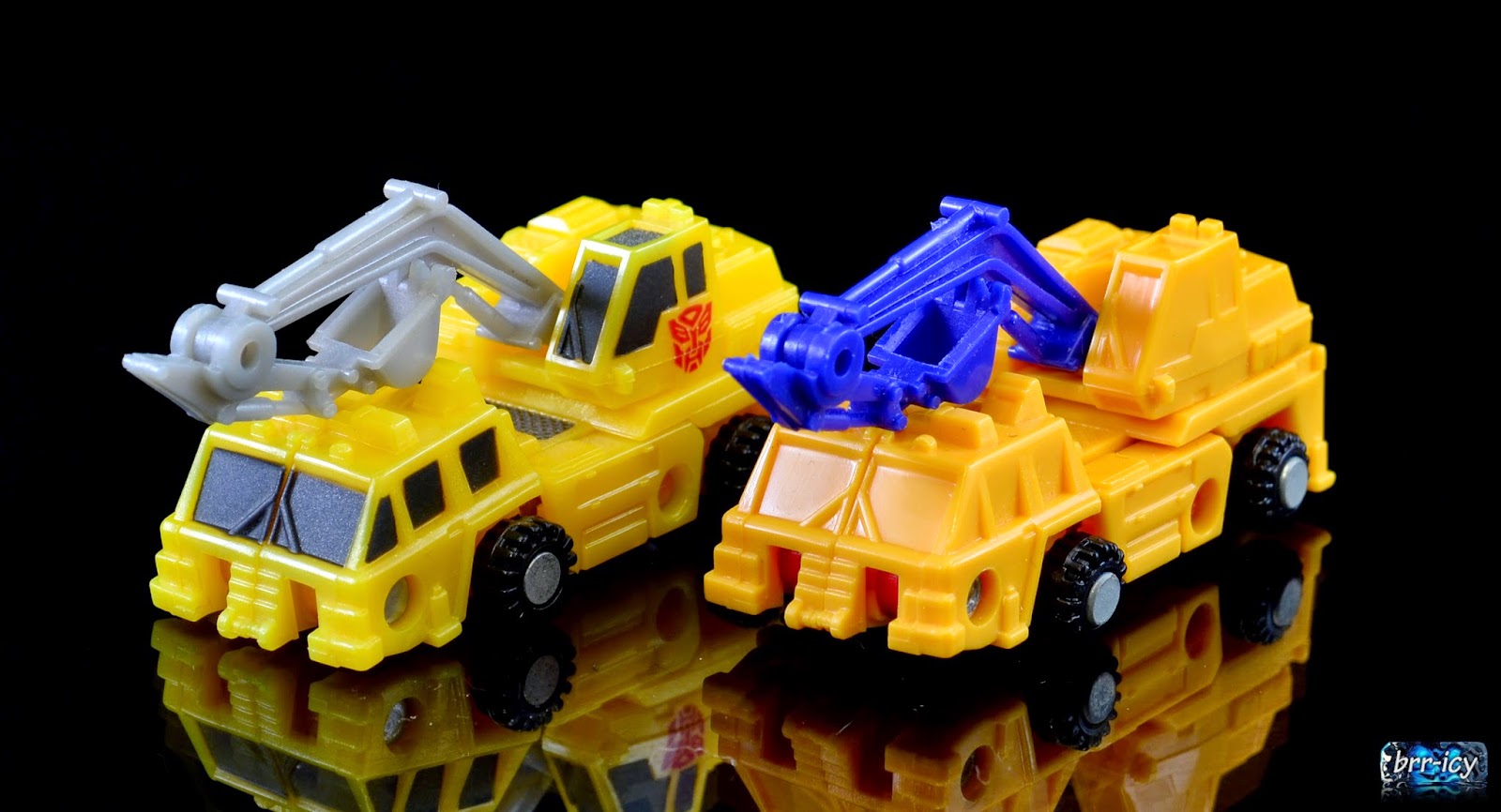 In bot mode, you can see the red from the original, the reissue gets a few more details. My vintage one is partially applied labels, so you don't get the full effect of the labels and detail of the original. 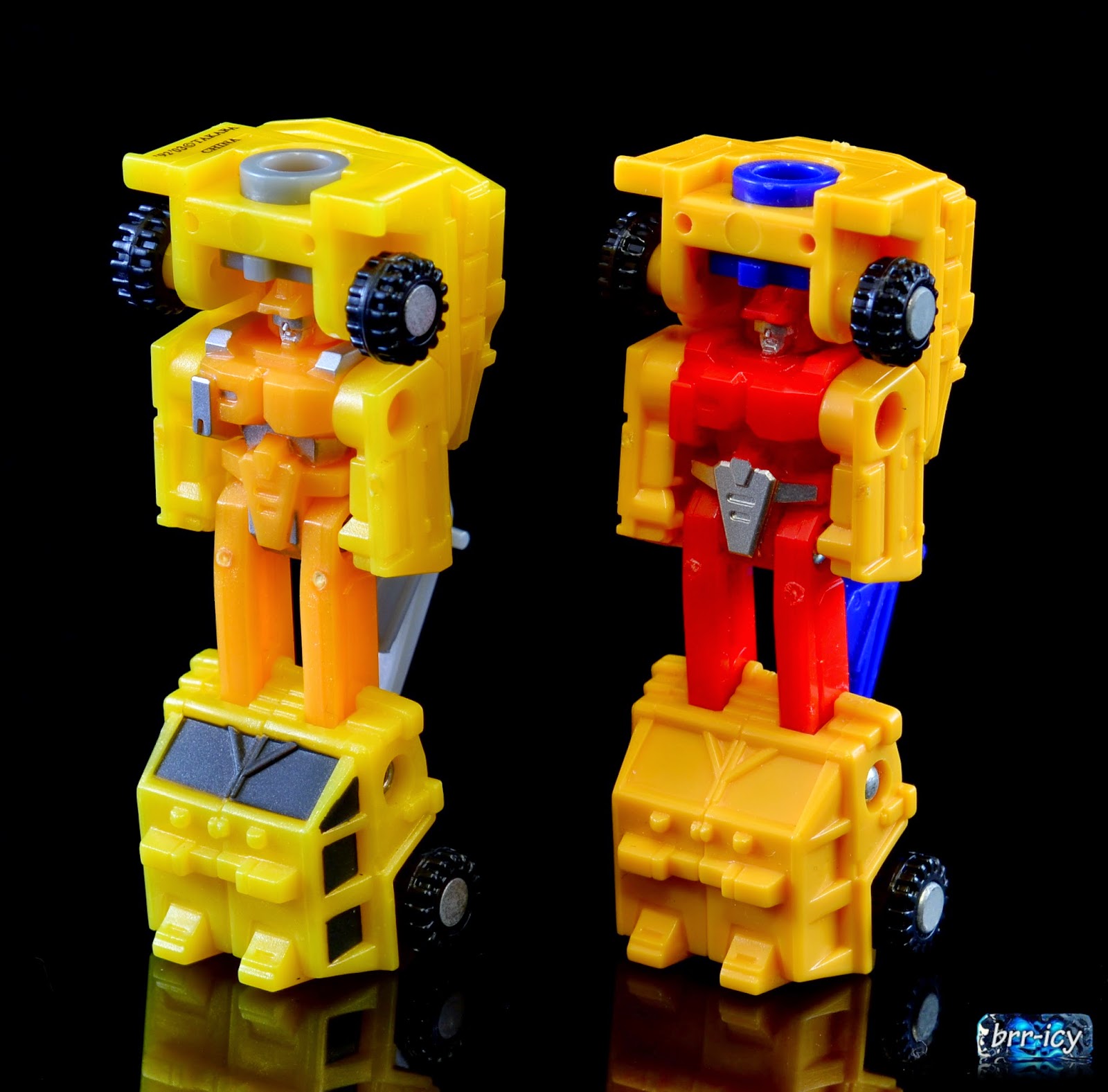 Next, Gran Arm, the chest of the combined mode. He's probably my least favorite of them. The original had a nice red and white colourscheme. 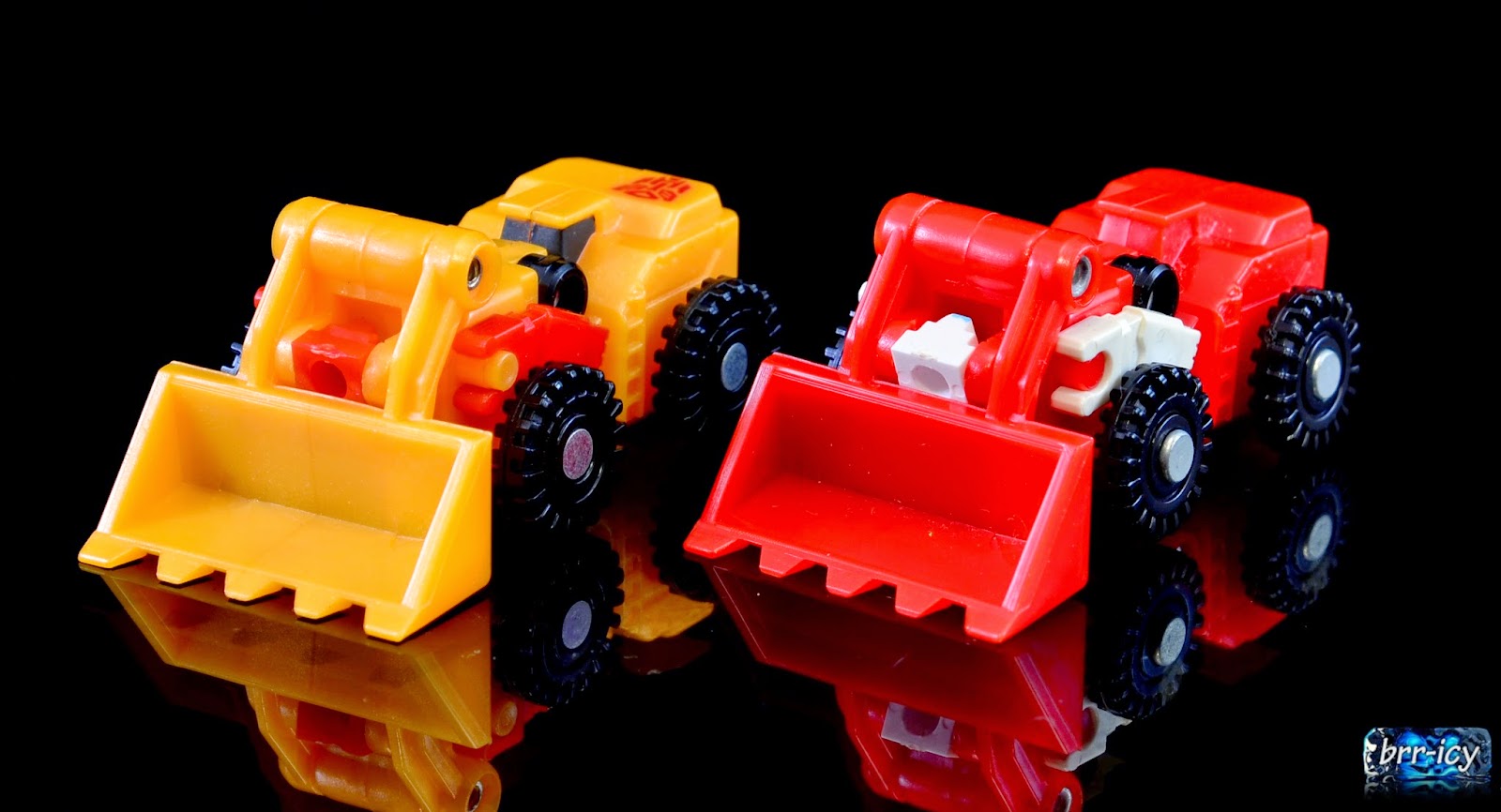 The reissue's orange and red is ok I guess, I vastly prefer the red and white though. 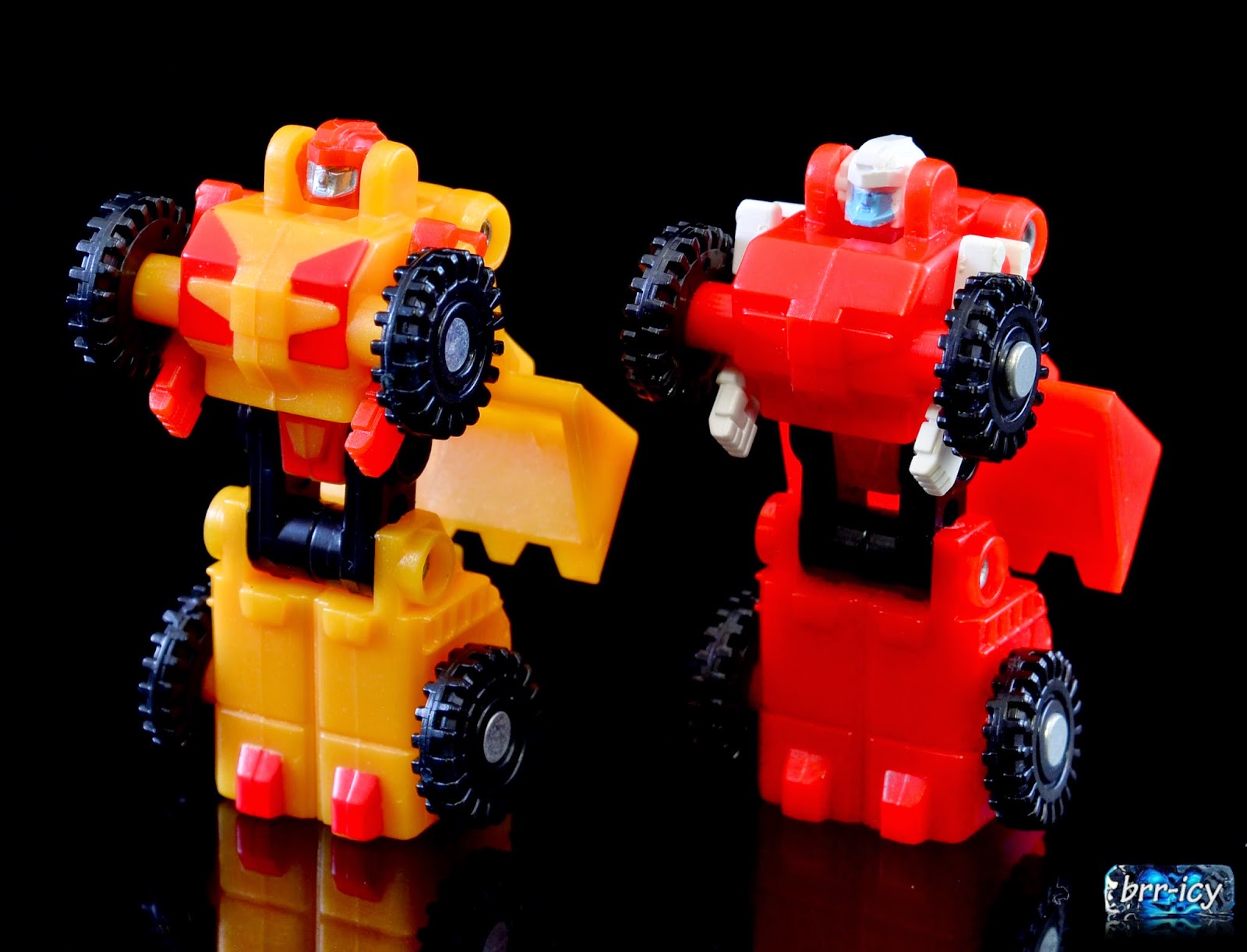 The left arm is made from Iron Lift. He gets a pretty major colour swap with the red/grey on the reissue and white/blue on the original. His crane arm can fold up, and is articulated at the base and hook with a swiveling base. 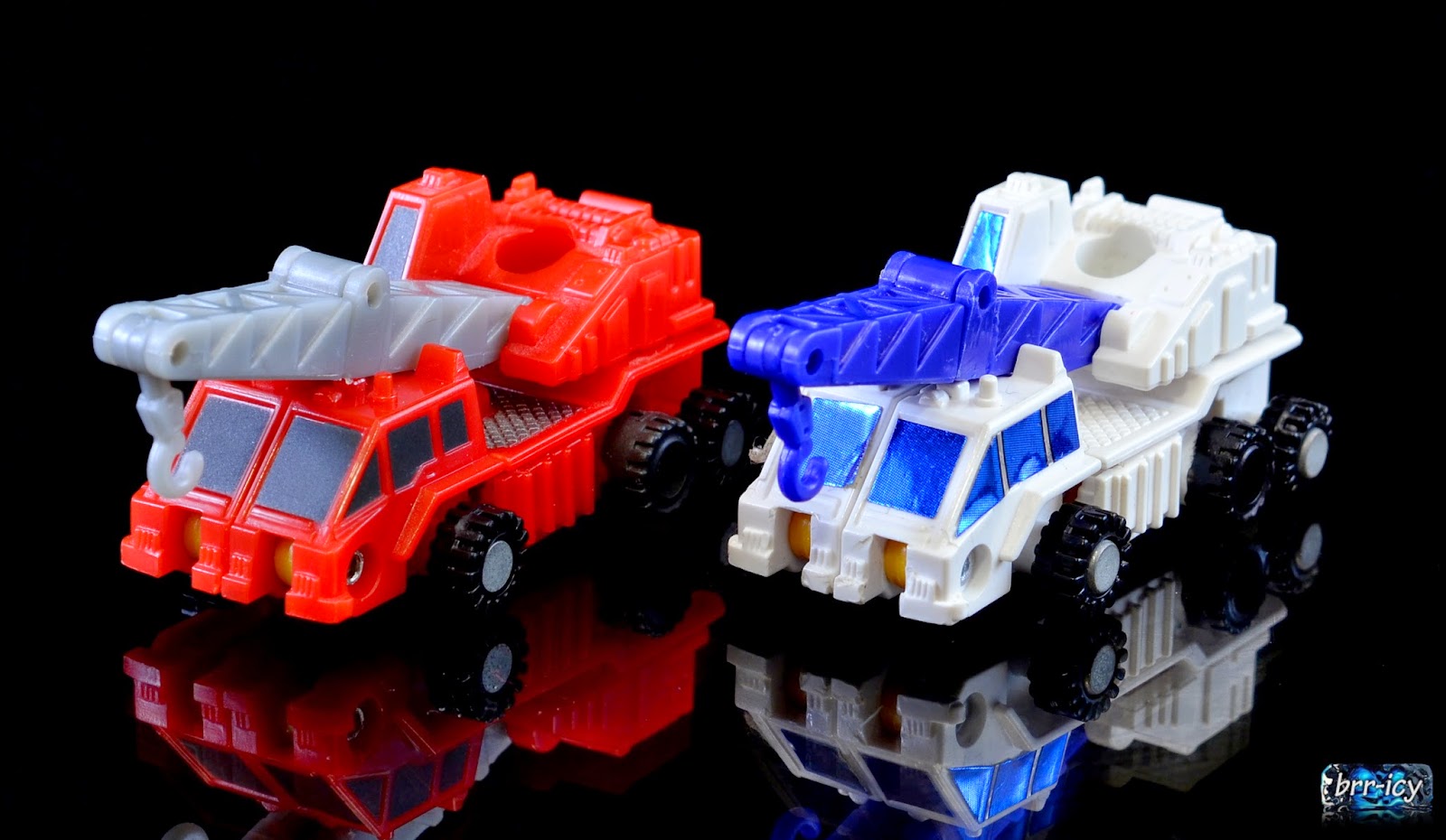 In bot mode, the original has a much nicer "pop" than the reissue. There is a lot more paint apps on the reissue though. 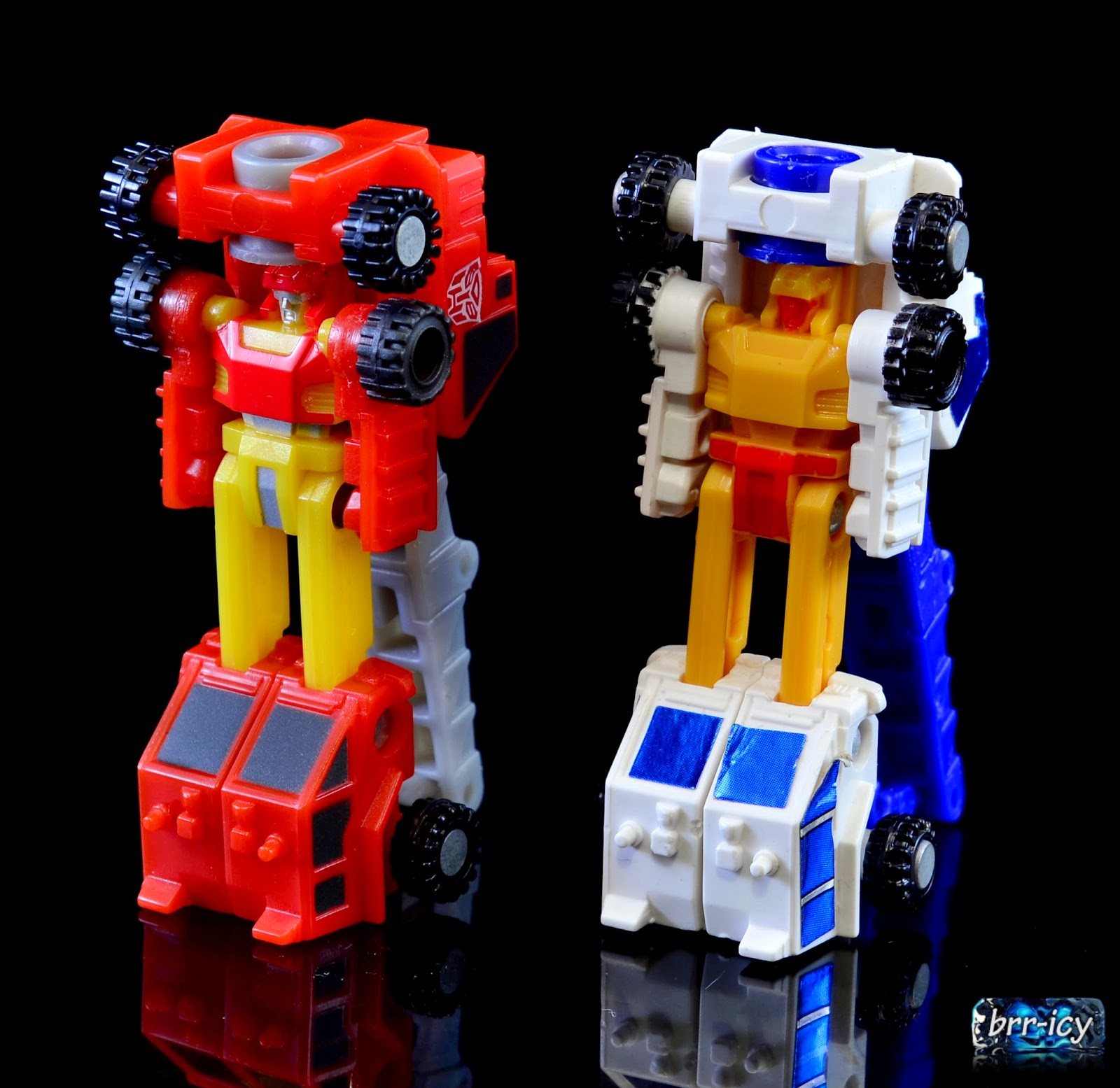 The left leg is Mixing, who has a very striking resemblance to the left leg of Devastator, Not sure if that's deliberate. He got the same colour swap as Crush Bull. 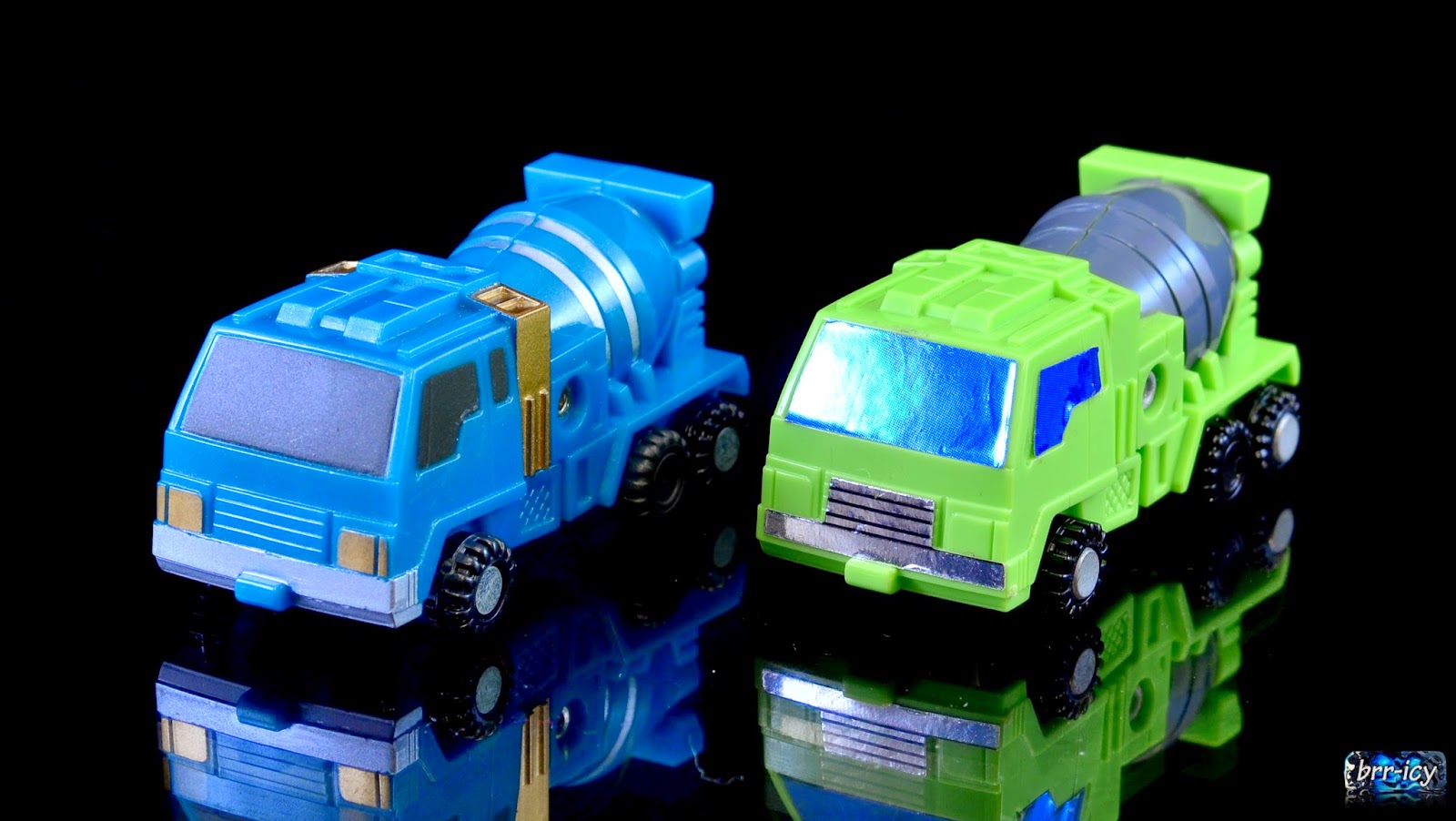 In bot mode, he has a different look to him. I really like the head sculpt on the mold. 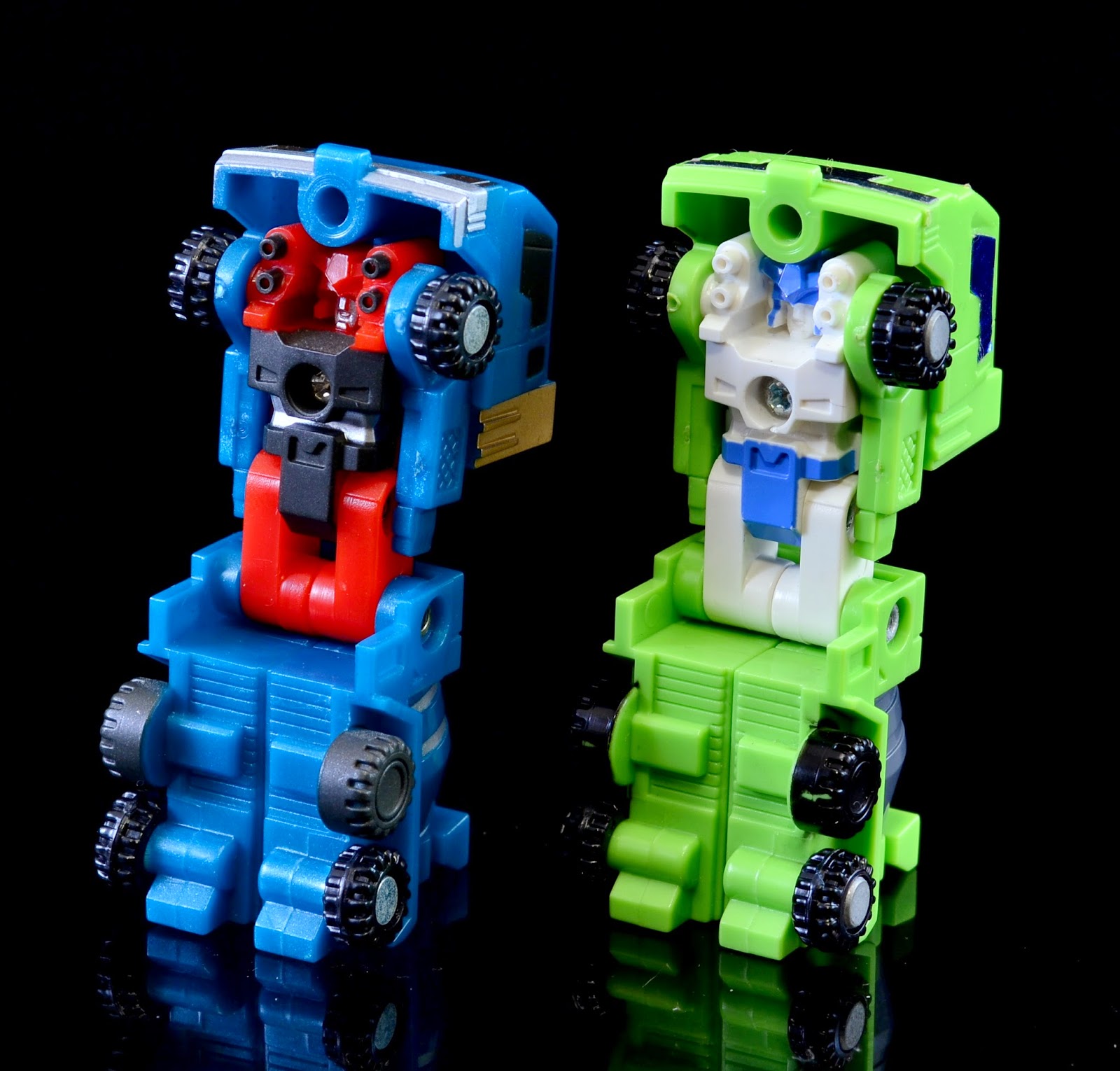 The right leg is made from Treader, who was black on the original and orange on the reissue. Another whom I vastly prefer to the reissue. 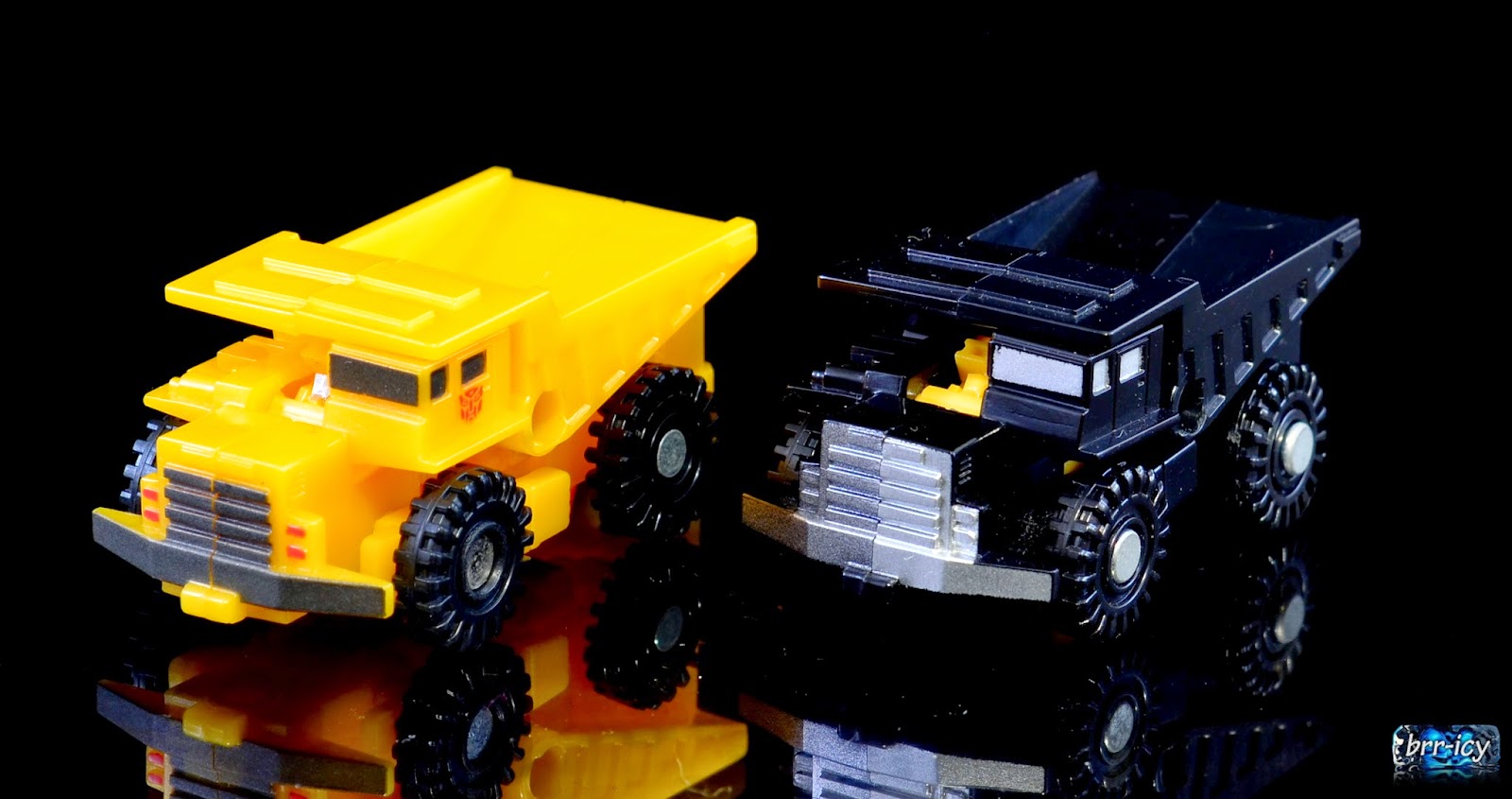 His transformation is pretty sweet for a Micromaster. The crotch area swivels down from behind kind of like Long Haul's. 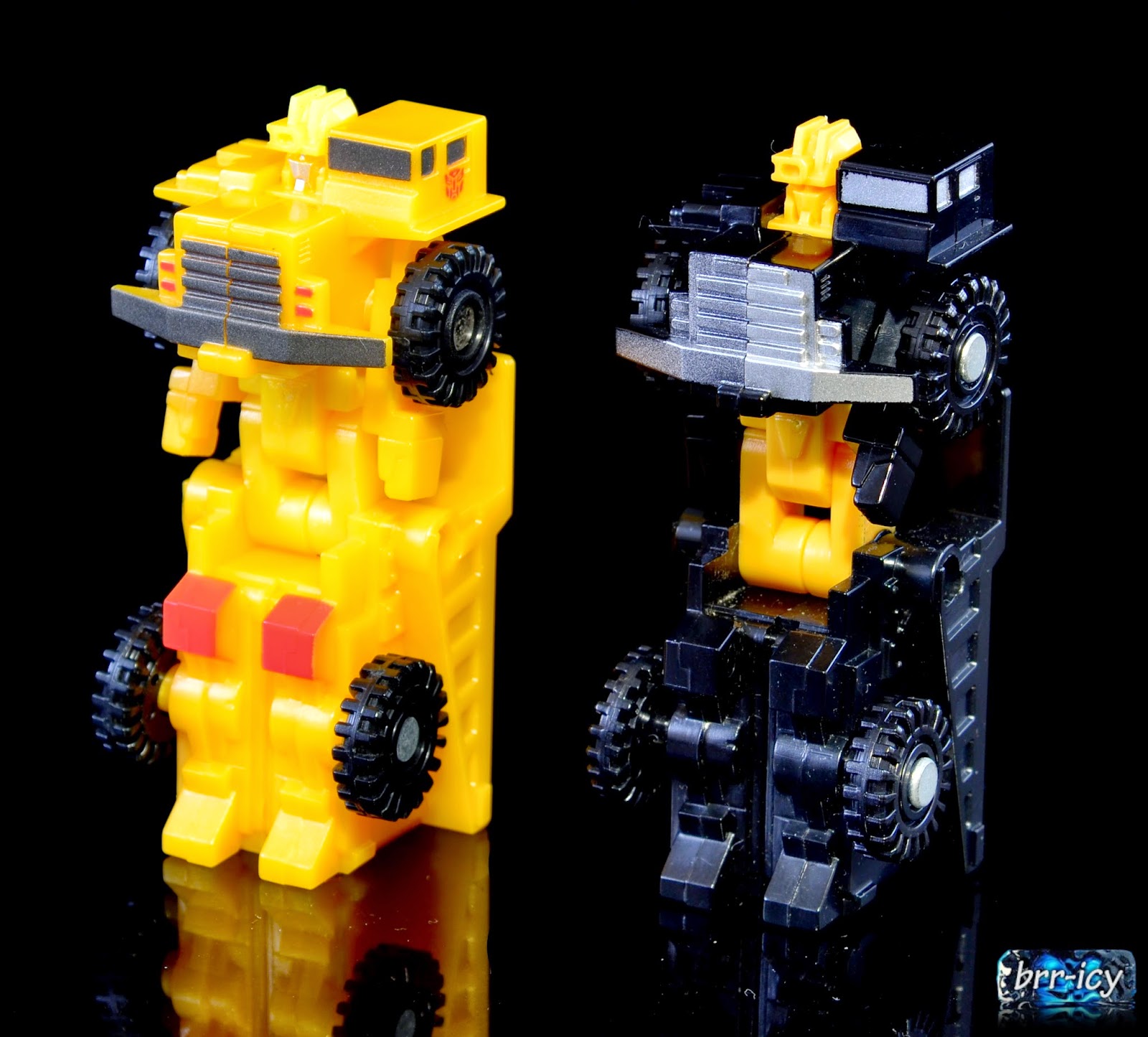 The kibble can form a jet just like the others.

Combined mode is much more cohesive with all the yellows and oranges on the reissue, but the original has that nice contrast that's missing from it. 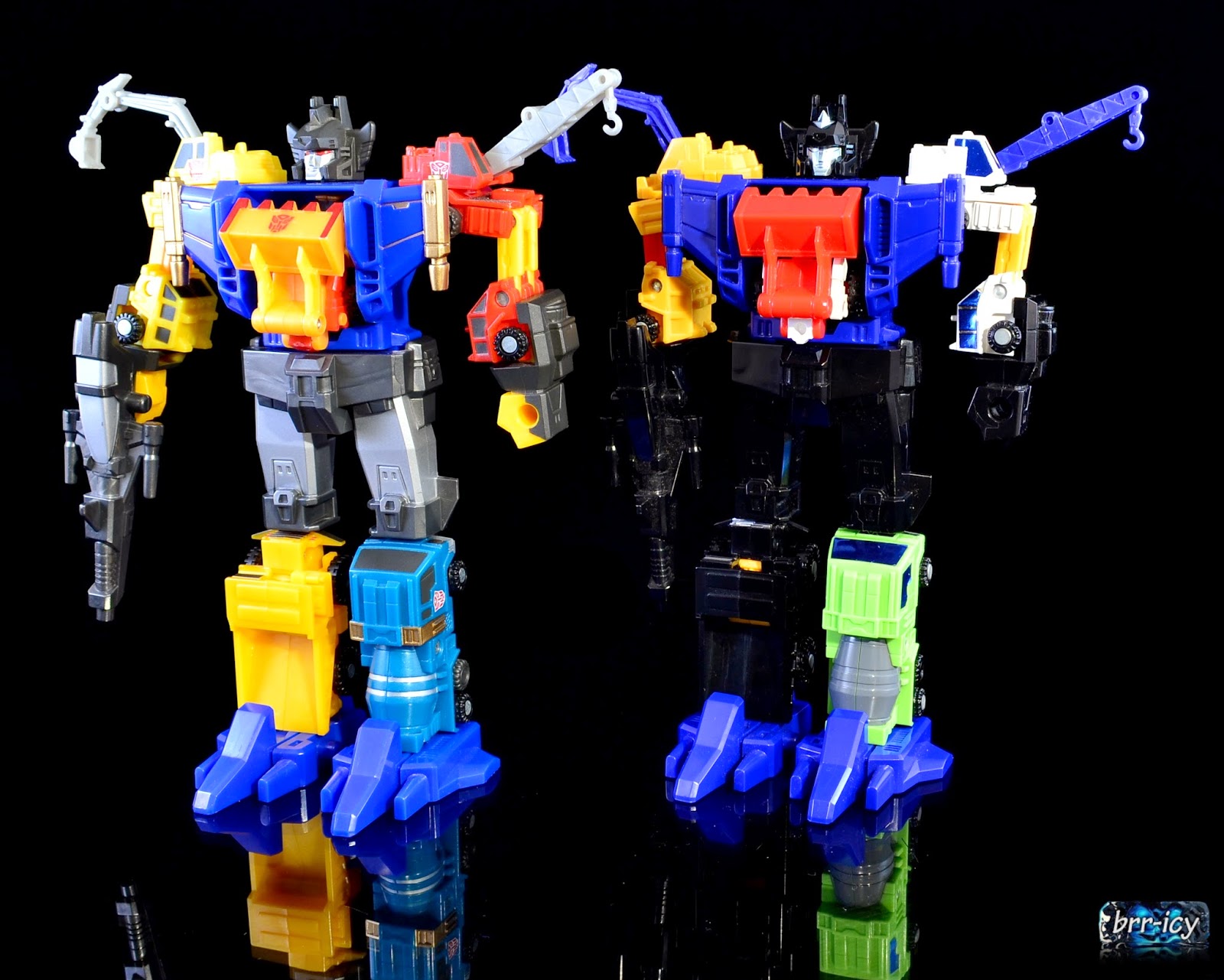 The Hasbro version was done as Devastator, but I will save him for when I get the Chase version 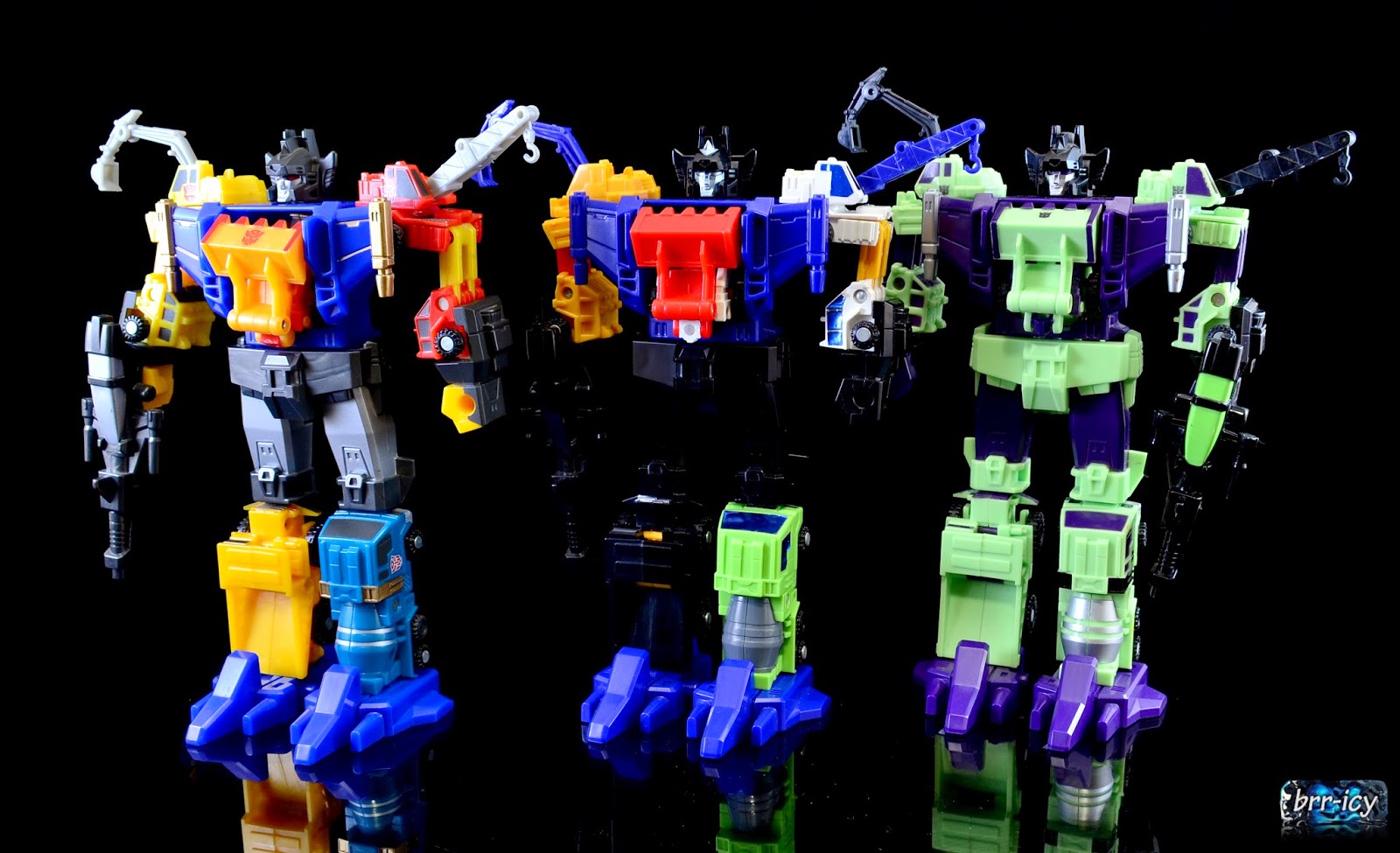