Today, we do another edition of Upgrades. Continuing with the randomness of the last ones. Wanted to change it up a bit, save the next review for tomorrow. 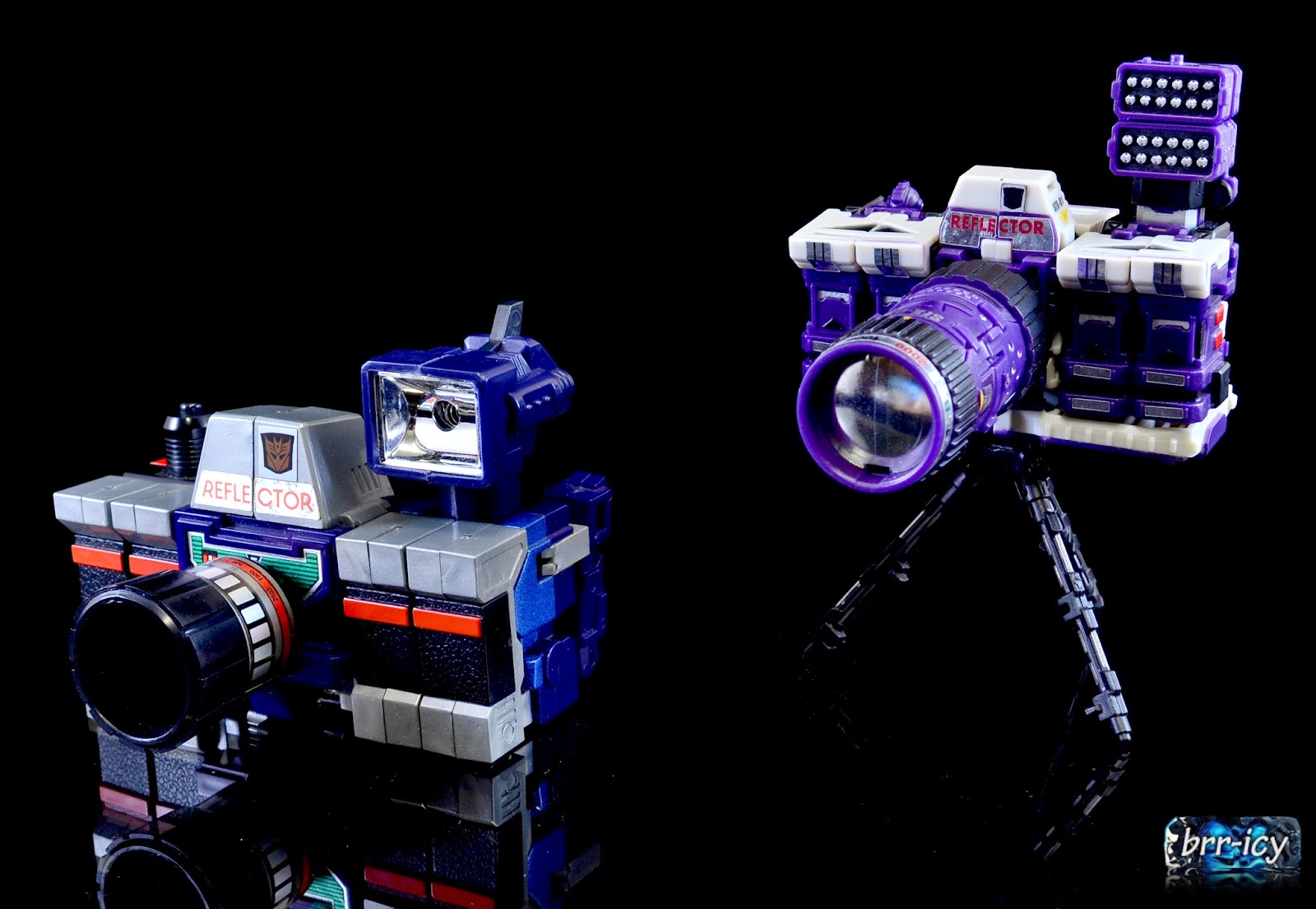 First up, Reflector and his Perfect Effect Scouting Force X counterpart. I'll preface by saying that the PE one has a set of Reprolabels on him to bring out more detail. In camera mode, the PE one has a much longer lens, and a tripod, other than that, they are pretty close other than colours.

In bot mode however, They are very different, I know there is a toy version of PE Reflector, I almost picked it up to go with my black and purple ones, but didn't in the end. The PE figures boast an impressive amount of weaponry, Including knives on the back of their hips, a sniper rifle, etc. Everything stows away in camera mode as well. The G1 does use the flash and lens as weapons plus a hand gun each and some missiles

Cosmos recently got an update in the Generations line as a scout, he came packaged with "Payload" who is actually G1 Blastmaster, the rear half of this combiner shuttle. In alt mode, they are pretty faithful to their original figures with the UFO and Shuttle alt modes.

In bot mode, you can really see the resemblance between Blastmaster and Payload, Payload also gains a third mode in the form of Cosmos' gun. Cosmos is much more athletically proportioned than his stubby G1 version, in this case, I think it's to his detriment, as when I think of Cosmos, I think stubby, slow guy that always got captured. 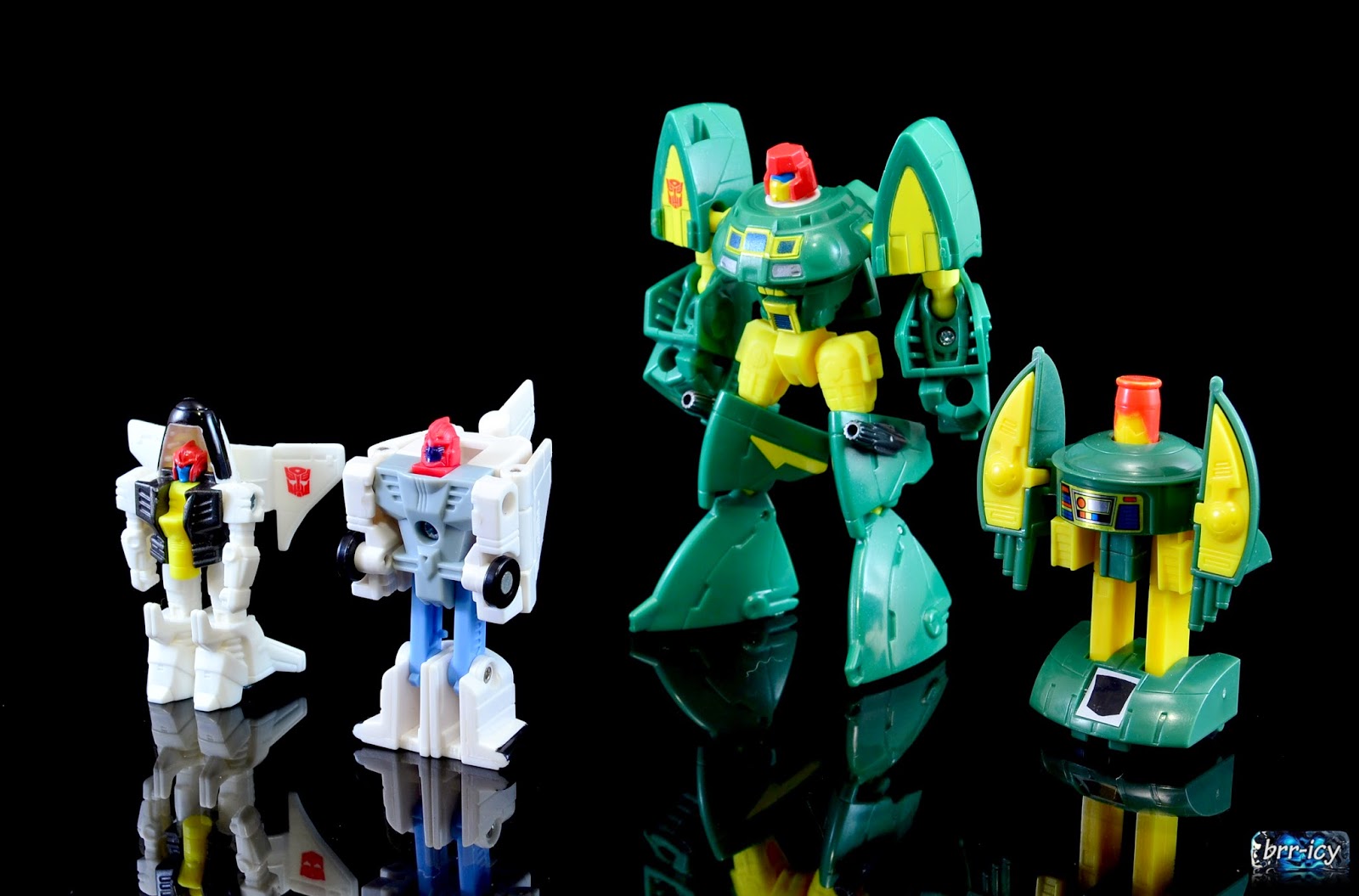 Ratbat vs the MP version. The tape modes are very close between the two. The Masterpiece is lacking some of the detail that the G1 had. There is some gold detail added due to the way the MP transforms. 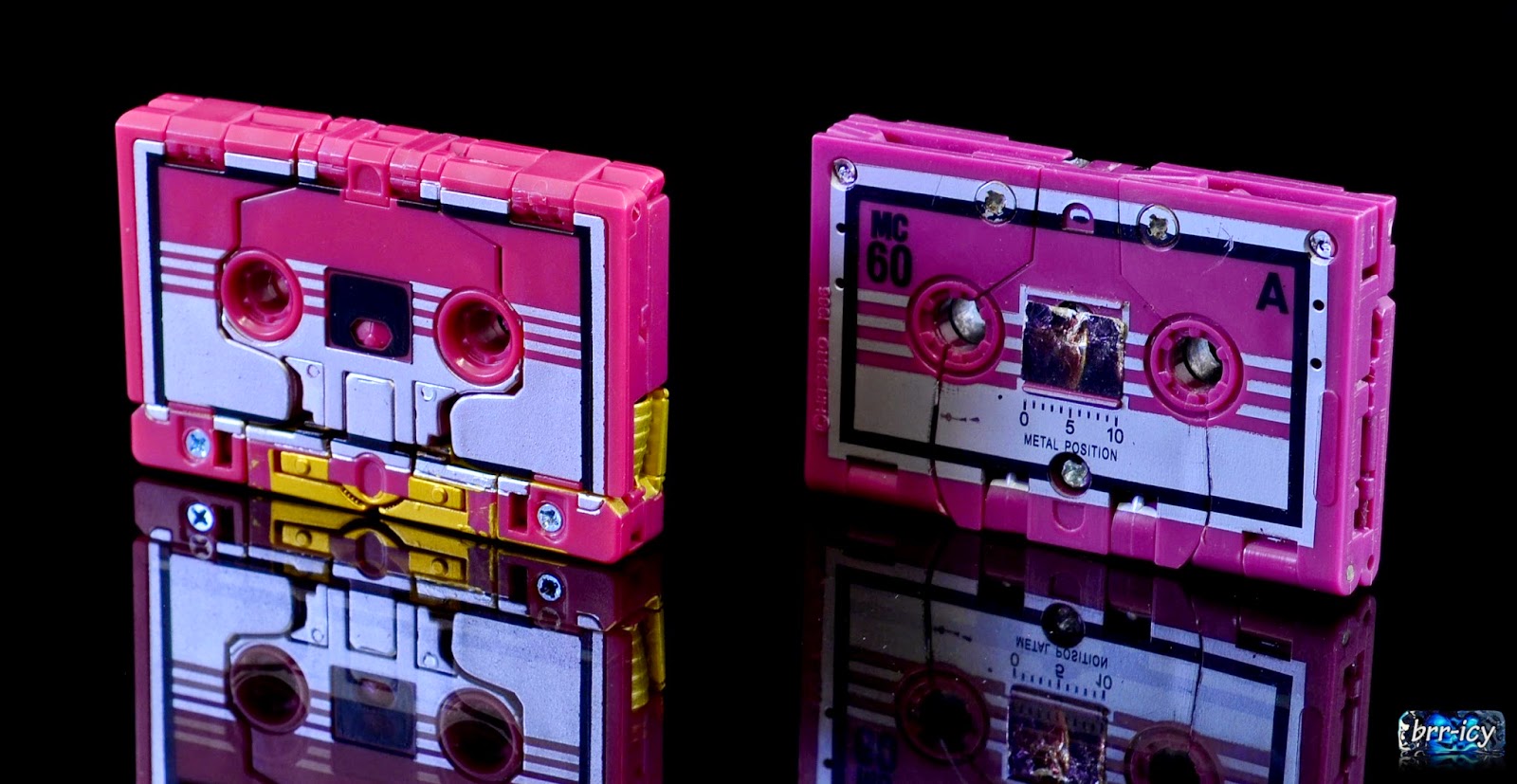 The G1 figure required the weapons to be added on, whereas the MP has them built right in to it, hence the added gold detail. The feet on the MP can clip over the clear bar on Soundwave's arm and the vents in his shoulder.

The not mode is pretty faithful to the original, minus a few labels and some added articulation. The gold is gold paint instead of chrome like the original as well. 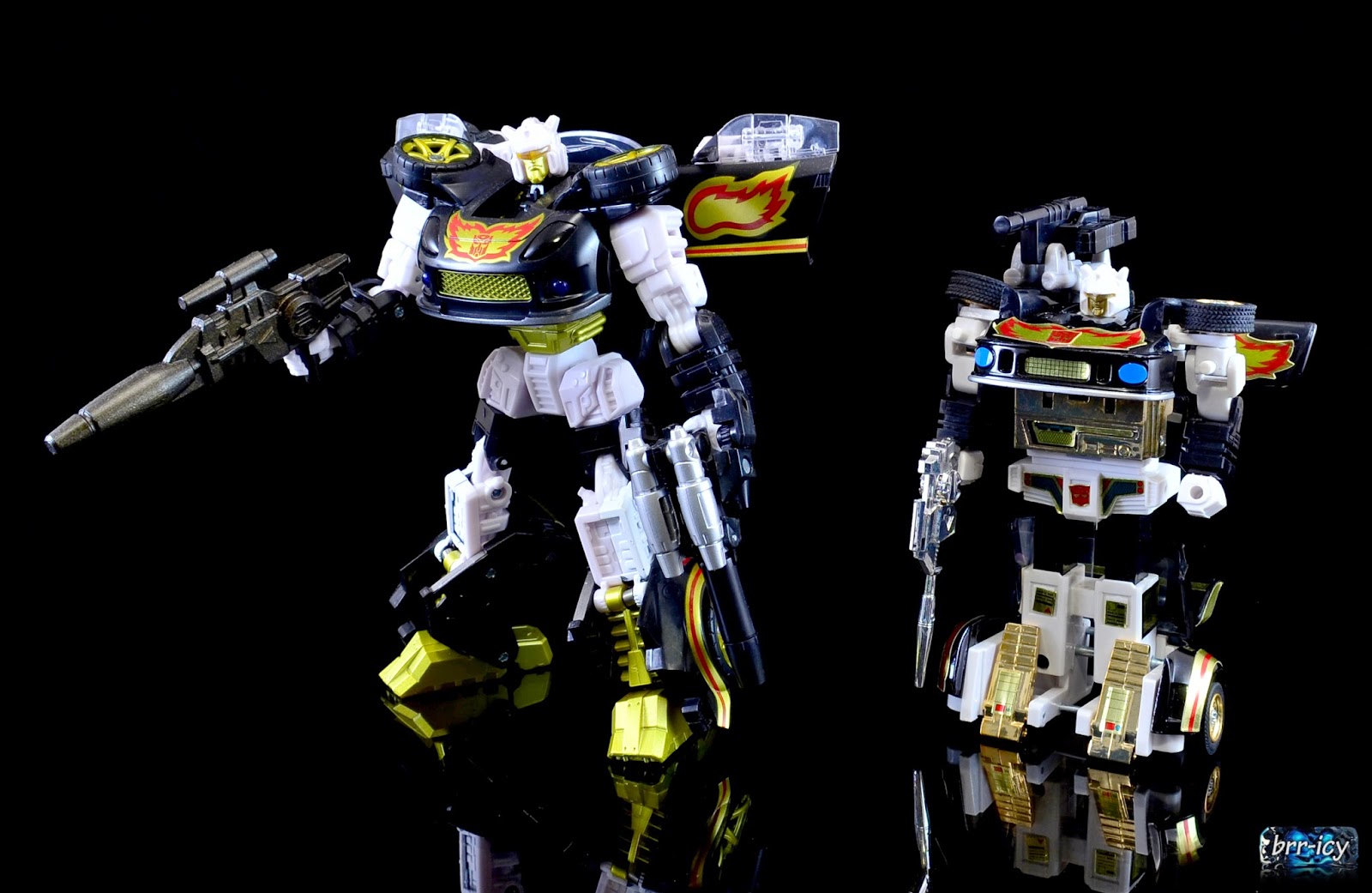 Thunderwing was updated in the first half of the Generations line as well. He lost the Pretender functionality, he does have a removable drone on the front, too bad they couldn't have added arms and legs to it. Mine is also featuring a set of Reprolabels.

In bot mode, he's pretty close to the original shell. Some of the colours are off, but still good nonetheless. The labels actually came with a little label to go inside the chestplate that shows the inner bot inside, kind of neat imo. 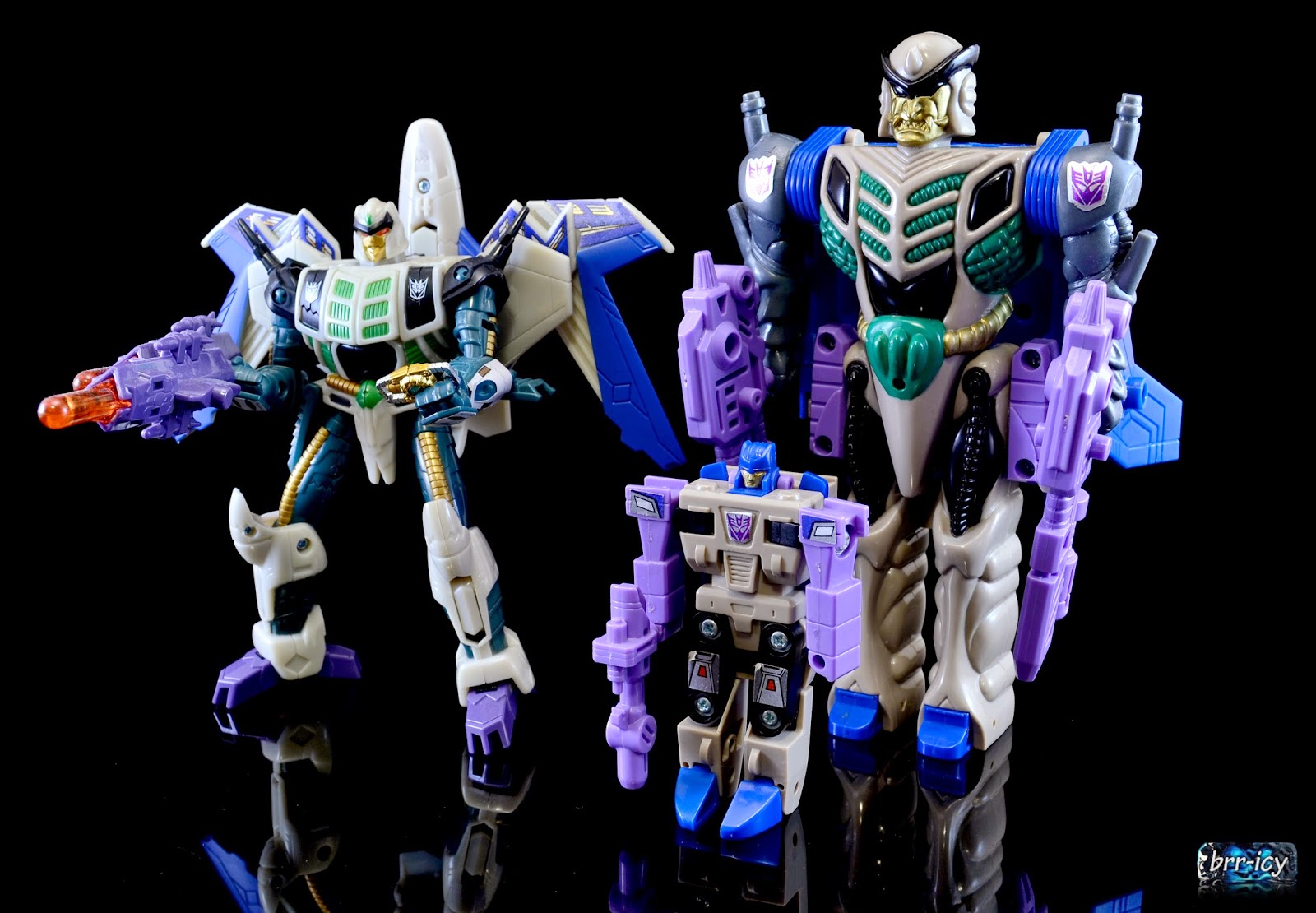