These guys are a different breed altogether, I would mark them as the pioneers of "sticking parts where they don't belong" or as people call it now, weapon storage.

Sure, things like the Headmasters and such utilized their weapons in alt mode before this, but these are the first I can remember that are more akin to TF Prime's Bulkhead where you just stick his wrecking ball to the back of the truck and call it "stored." The Autobots are called Lightformers and the Decepticons Trakkons.

Don't get me wrong, I really like these guys, well most of them...But their weapons are pretty outlandish. They all have a gimmick that if you turn or push something on the weapons, lasers light up along the inside as you look through them, done by mirrors and a slot on top of the weapon.

We'll start with the only one I don't like that much, mainly in bot mode, we'll get to why in a minute. In jet mode, Deftwing is a Harrier jet, a little stubby, but very well done, there's no kibble on the underside of the fuselage, the wings have the arms there, so there is some kibble. They follow the traditional Pink vs Green window scheme of the Euro line. All in all, a nice looking jet mode. 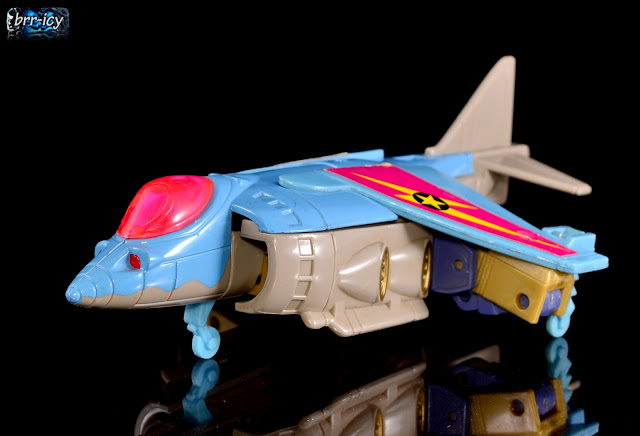 Then this happens, right on there, no attempt to hide it or blend it, it's just there, whomp! 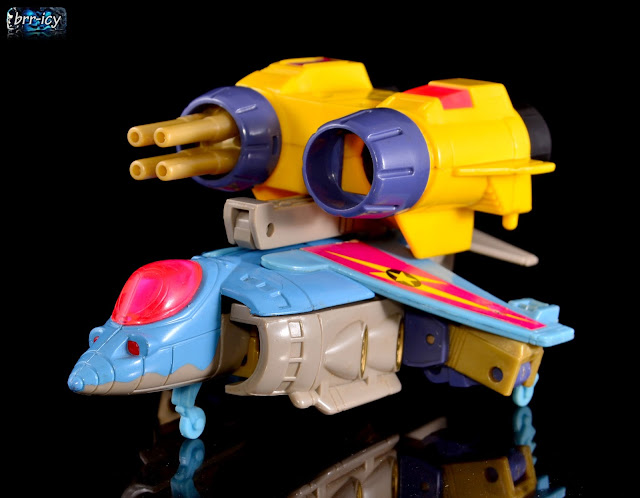 His transformation makes for a different bot mode, but not in a good way. It's like they did the top half, got to the waist, and gave up. I find it interesting that these four don't have any insignias on them at all. 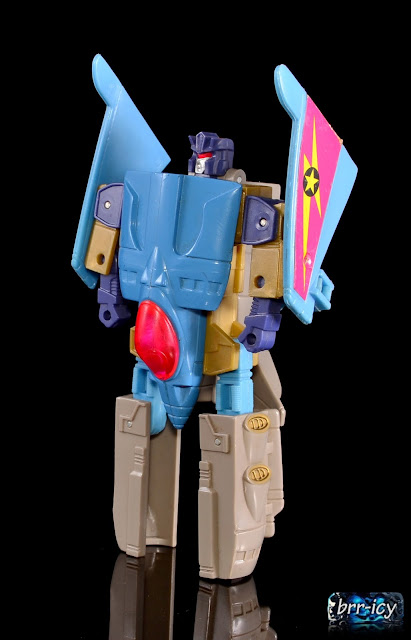 The weapon is held by two hands, and it's so oversized that it comes with it's own stand. 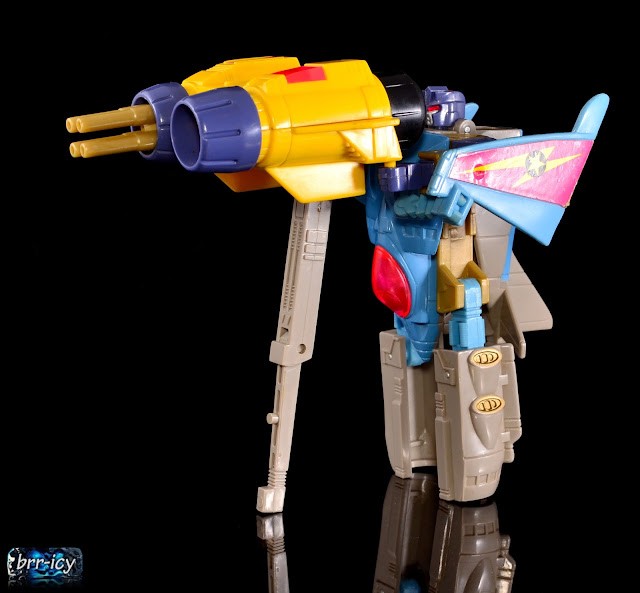 The second Autobot from the sets is Ironfist, he's one of my favorite European figures, I really like how he looks in both modes. He's a Hummer in vehicle mode, Maybe a desert version? Looks neat anyways, and they got the proportions for the truck mode right. 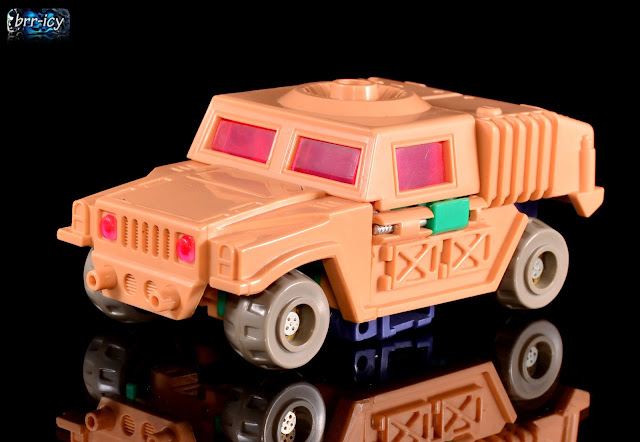 And instead of the traditional 50 cal. machine gun, we get a 6000 cal. Oversized, but it does rotate. 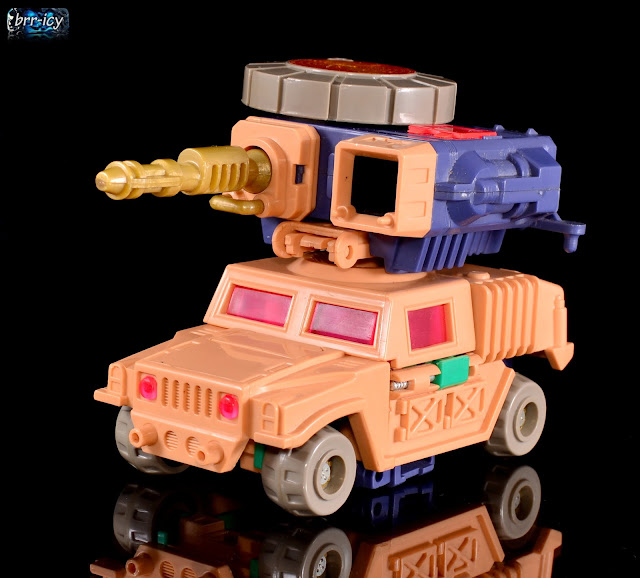 His transformation wasn't what I was expecting when I picked him up, it's pretty straightforward, but still interesting. 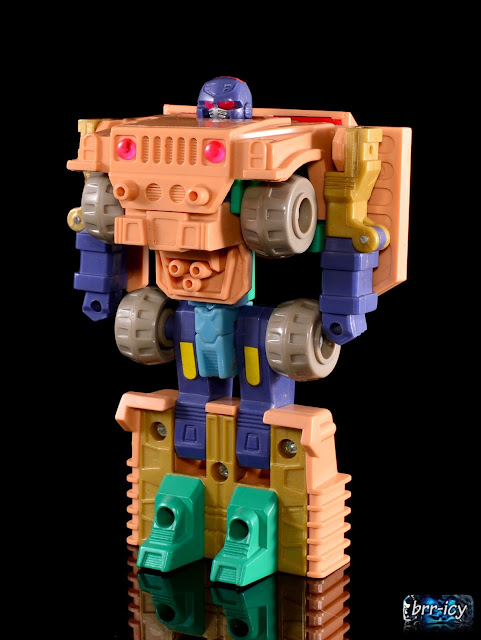 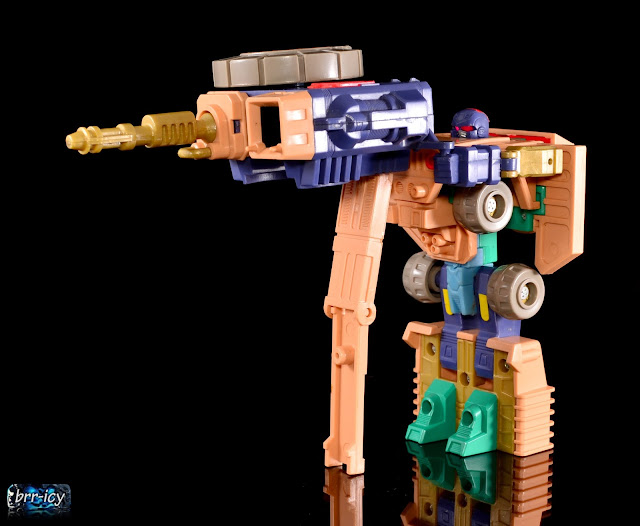 The air Decepticon is Fearswoop. He's an F22, I didn't bother taking an unarmed jet mode pic as it's not as intrusive as the others. Or that's an excuse for I already had these three pics and didn't want to take any more, your choice. Mine has a broken gun, they should match each other. I'll get around to fixing it one day. 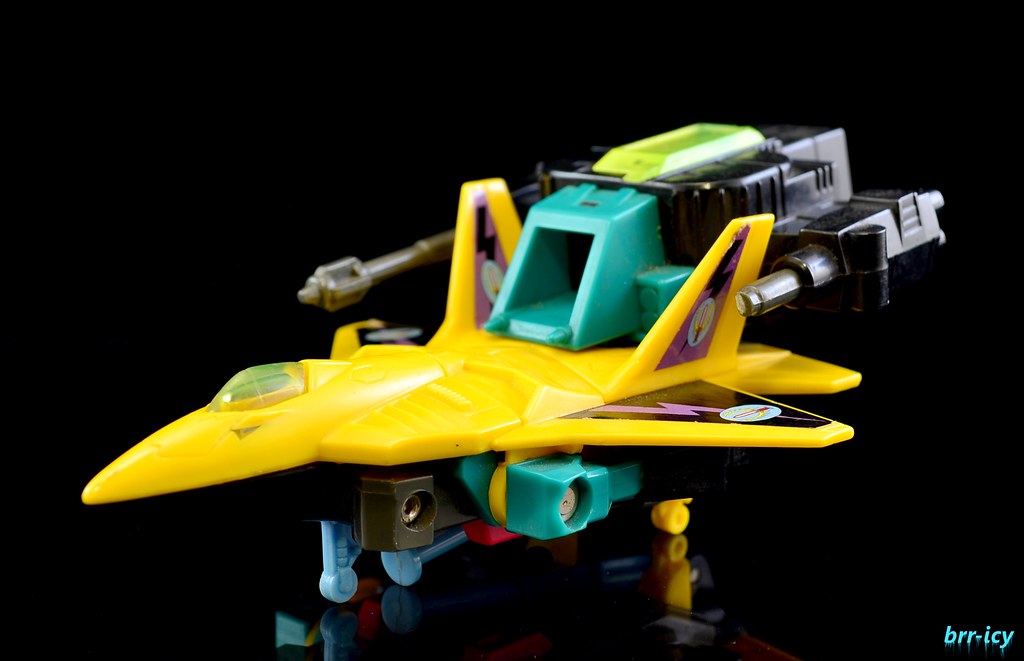 He has a very "Cyberjet"-esque transformation. One thing I adore about the European releases is their headsculpts, they just look dangerous, I guess it offsets the very firmly early 90's colours. The first three were all from Demerge's childhood collection. It's been a blast restoring them to their former glory, and even if a couple aren't perfect, they will be as close as I can get them one day. 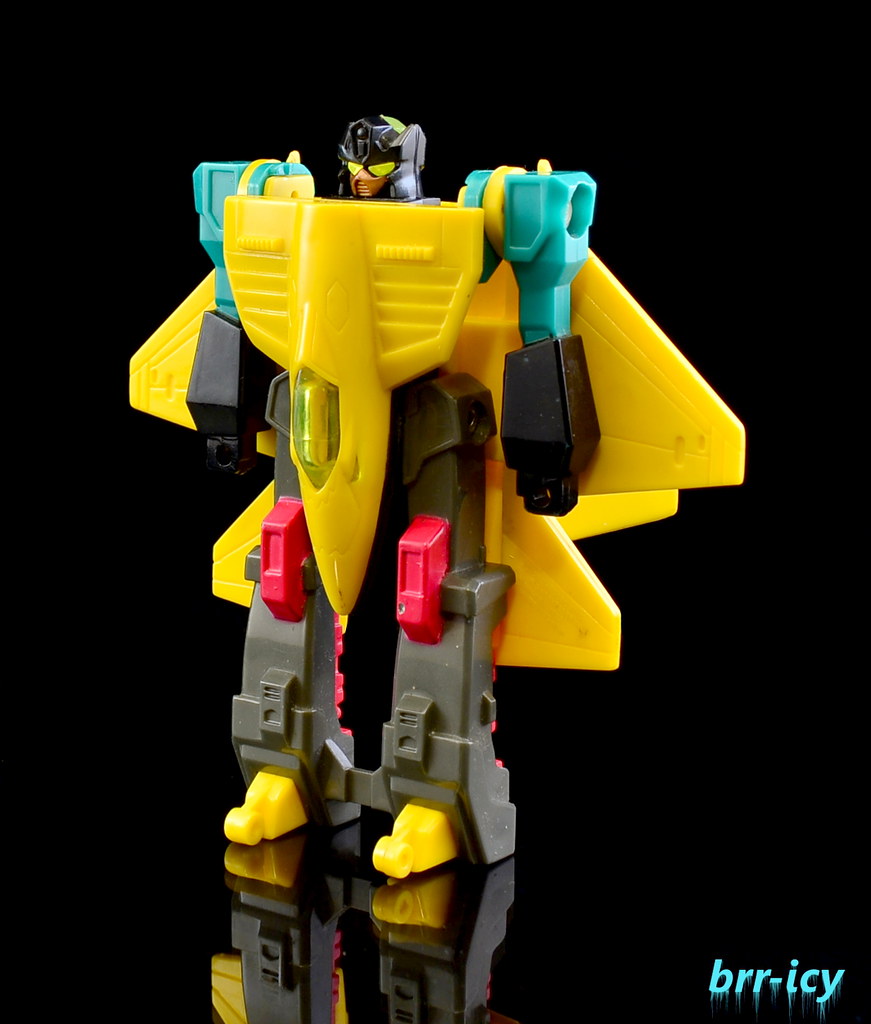 You guessed it, armed with a mobile turret. 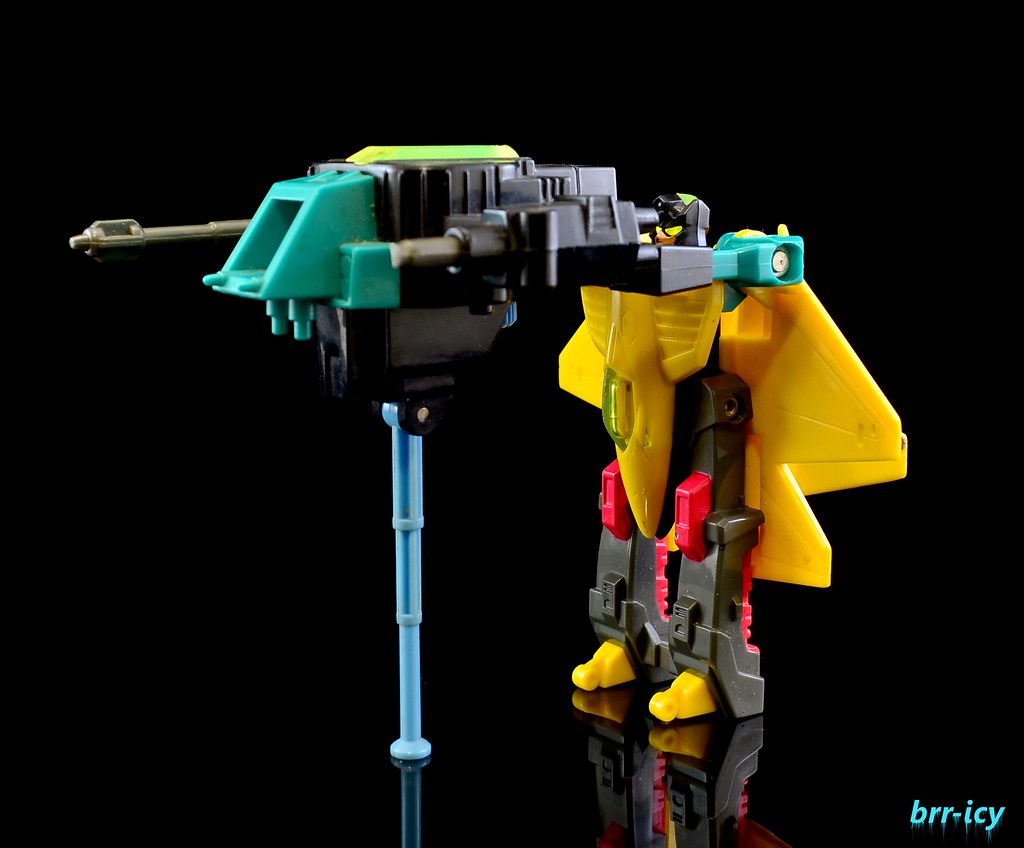 The final one of this quartet that arrived today, Calcar. I picked him up with the help of Puma, the weapon I got off of a TFW member. cultureatus. This guy seems to be pretty scarce. He's a futuristic buggy type car. 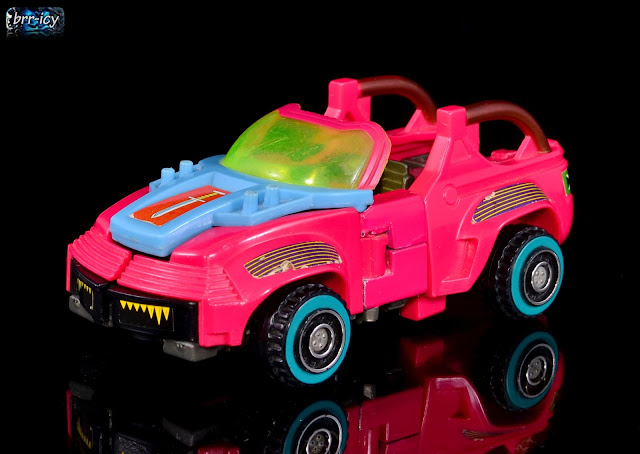 His gun is also a little more refined as well with it hanging more off the back like a pick up truck bed than plopped in a hole on the roof. He has one of those transformations that gives you a little surprise, I was pretty intrigued by what they had chosen to do with the chest. I find it interesting that the Trakkons both have the sword motif going on, Fearswoop has it as the insignia on the wings, and seen here on the hood. 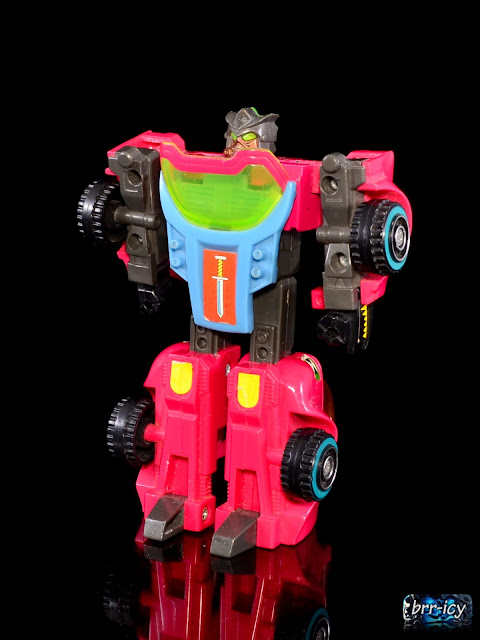 With his crazy huge gun. I like to rag on the guns, but they were a neat addition. Something different in a time of spring loaded or otherwise missile launchers everywhere, someone's gotta have some freakin' lasers! 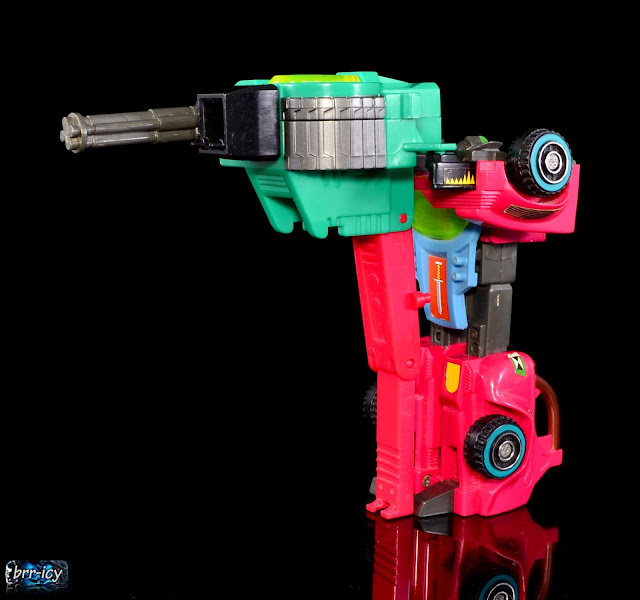 I actually have the boxes for both the jets, but I appear to have forgotten to take pictures of them.