A couple more that I picked up at the show this year. Fansproject Knight and Toyworld Devilstar, or Sixknight and Astrotrain respectively. 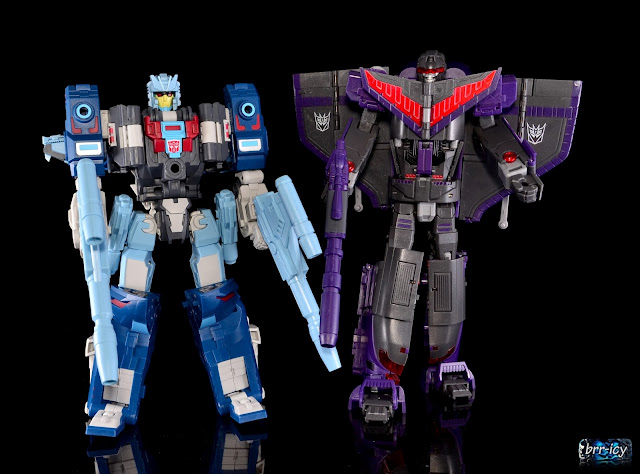 Devilstar was a TFsource/TFcon exclusive redeco in cartoon accurate colours. I had wanted this since I saw the black and white original deco. I haven't really liked any other molds for Astrotrain since G1. The much loved classics mold wasn't anywhere near good enough for my liking. In train mode, he's pretty accurate, other than they take the boosters off the back of the train that the cartoon had, makes a more accurate train though. The wheels all move and the connector works as it would on a real train.

The exclusive included these diecast tracks to display the train on if you're so inclined. 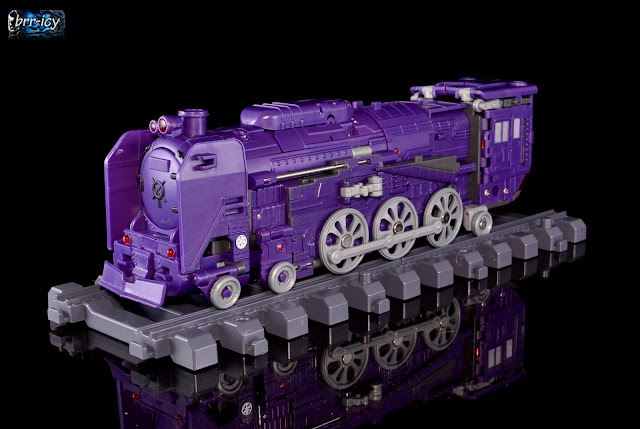 I really love both alt modes on him, very well thought out, kind of a fiddly transformation, and it's sometimes hard to line a couple things up, but the end results are worth it, no shuttle fronts on the sides of the train, or train fronts covering the entire wing of the shuttle lol. I would have liked a different coloured window, but this will do. The only thing the shuttle has is retractable landing gear. There is some kibble on the underside of the wings. 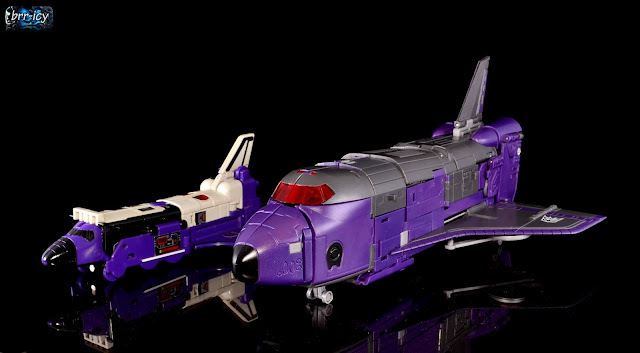 In bot mode, they nail it, there's a bit of train detail on the back of the legs, but that doesn't detract from the figure for me. The head features a removable visor as well. Mrsprucieboy on the Google+ Transformers group showed me that the legs have a couple extra steps that were missed in the instructions, it brings the knees to the middle of the shins instead of more to the front like the opening pic. The front panels on the legs lock in this configuration too. 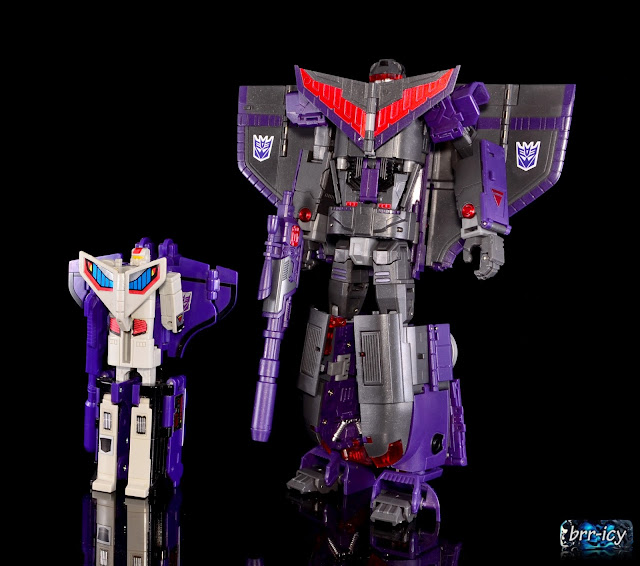 Now onto Sixknight. This is one character I didn't see anyone attempting any time soon. I'm glad that FP took the time to make the mold. He was a mercenary type character in Masterforce. In puma mode, they really went for robotic looking, decently poseable, but definitely not a worthy disguise. 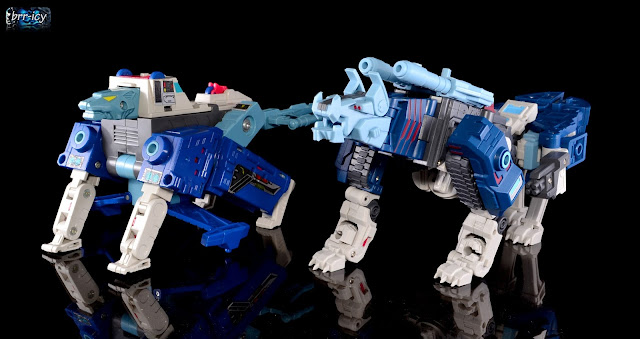 I love that they included G1 accurate guns as well as the fold up ones. The jet mode is more rounded than the original's blocky look. Not sure which I like better, but I am quite fond of that mode on the original.

They both turn into a space gun, the little fold up guns slide nicely into the front of the new one, it also has a trigger, unlike the vintage. 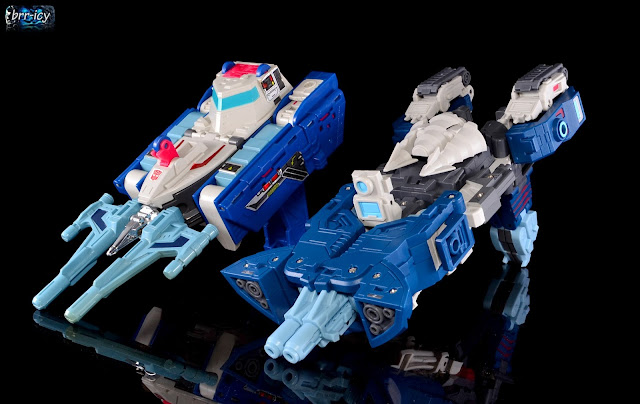 In boat mode, they took the most liberties I think. The vintage one was a hydrofoil, while the new one is an actual boat. I do like the angled guns on it though. This is one of my favorite modes on the new one too. 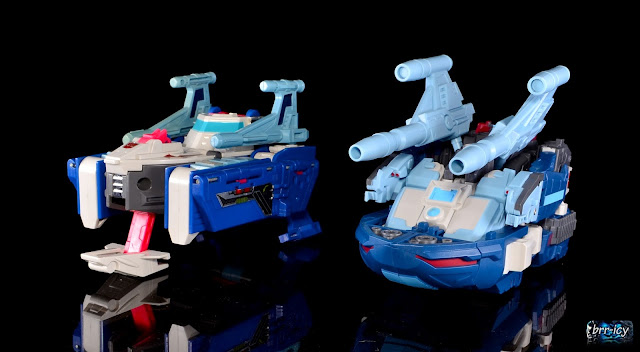 In drill tank mode. The original had a chromed drill, that gives a bonus point there I think. The new one is a much more low to the ground tank, I think it looks a lot more menacing. You can't see them as good, but there is a tank tread on the back half of the new one's tank mode too. It's pretty convincing. 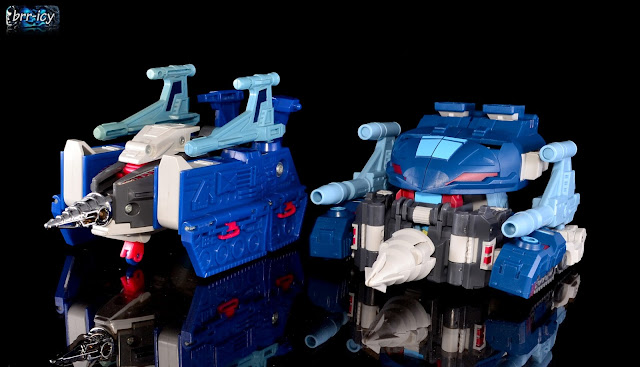 In bot mode, there's no real comparison, the new one is very well proportioned, and has a lot more posability. The fold up guns peg onto his hips as well. That said, the vintage one pulls off this mold much better than Quickswitch. I didn't even bother with the Madlaw version of the new mold. The new one has slide down sunglasses as well. While just a little small, he sits proudly on my MP shelf. 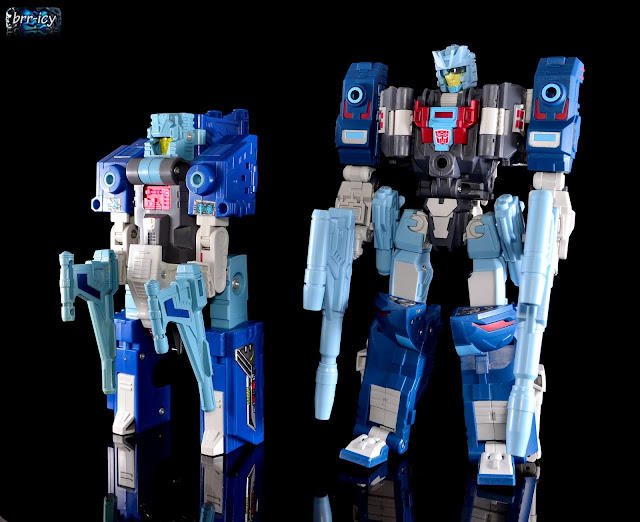 Hope you enjoyed this brief look at these two figures.
Posted by Brr-icy at 14:09