Also on the block for getting the rest of the posts done are the 1990 micromaster patrols.

First up is the Air Patrol (R to L) Eagle Eye, Treadbolt, Blazemaster, and Skyhigh. Each one turns into an air vehicle. Blazemaster has removable rotors that get lost pretty easily

Their bot modes are pretty nice, but they aren't the most stable, you have no idea how many times I knocked them over in my micromaster display.

Next up is the Construction Patrol (R to L) Takedown, Crumble, Neutro, and Groundpounder, all turn into construction vehicles, with articulated parts, the bucket, plow, and crane all move (crane turns as well) 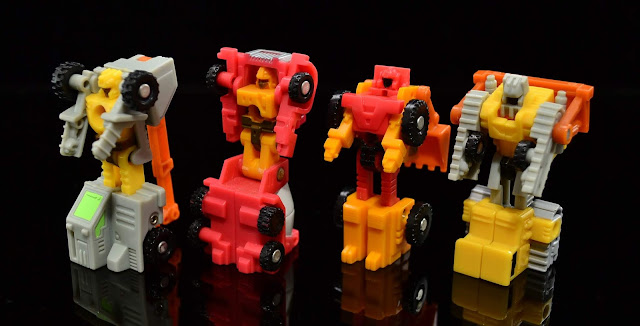 I like that there are a couple little surprises with the heads on the last two.

The Hot Rod Patrol is one of the most popular sets thanks to Big Daddy getting a Classics figure.(R to L) Greaser, Big Daddy, Hubs, and Trip Up 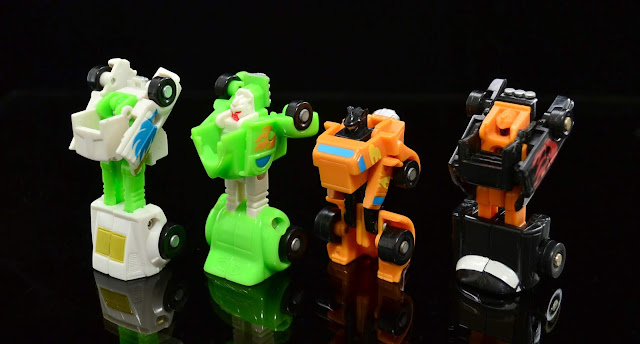 Bot modes are mostly the same until you get to Greaser who transformed backwards for some reason, the legs really suffer for it imo.

Last up is the Monster Truck Patrol, (R to L) Hydraulic, Big Hauler, Heavy Tread, and Slow Poke. For some reason, Heavy Tread is a drag car instead of a truck, but it does have a monster engine

In bot mode, Heavy Tread can't see over his chest lol. but they do pop nicely.
Posted by Brr-icy at 17:57