Figured I might as well post these as a pair, so in essence, this is more of a comparison review than a regular one. When I picked up Raiden, this was also in the package, along with one more nice piece I will post on later. Sixwing was unused, so no labels are applied, may get some repros to apply so as not to use the original sheet, but I don't know if I will.

In package, the six figures are prominently displayed. I really like how these look in box. You can see from the artwork how much detail is added by the labels, especially to the thighs and chest. 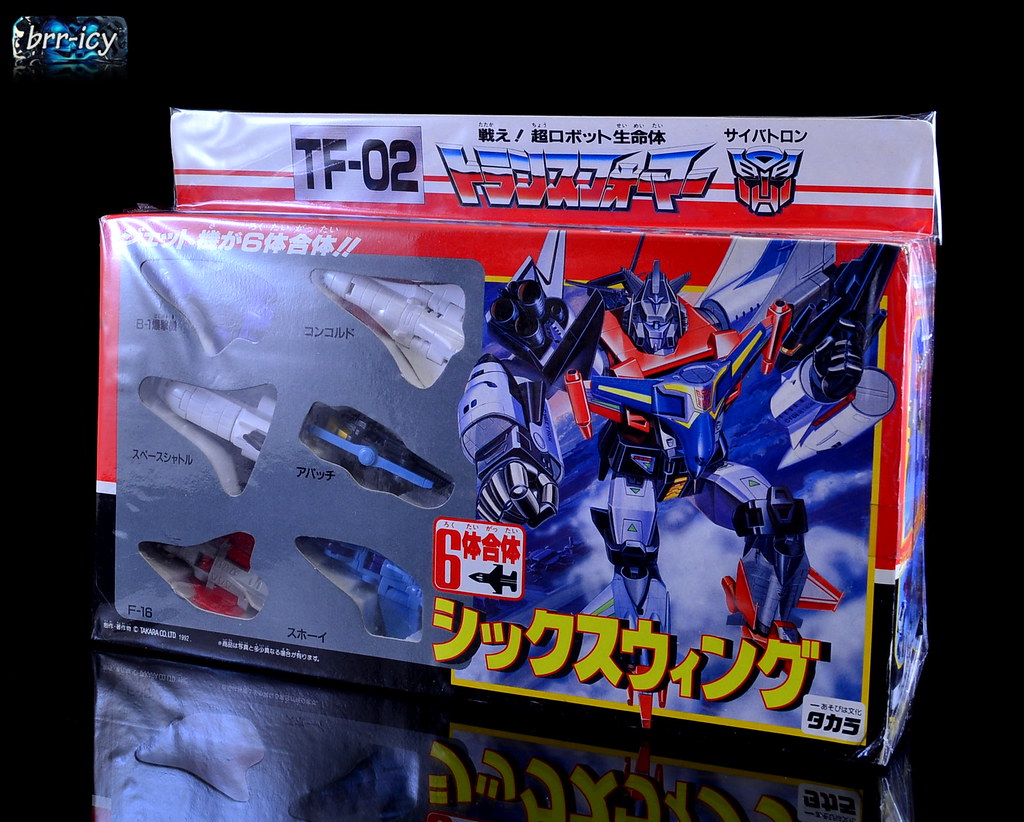 We'll go figure by figure, comparing them to the Destron reissue as we go.

Super Sonic is the first one up. The original has a very distinctive Autobot/Cybertron colour scheme. The white plastic on the Destron reissue is also slightly purple. The extra detailing is very prevalent throughout the reissue. He forms the left arm for Sixwing.

The transformation is fairly standard, flip the legs out, fold the nosecone and wings. He is a pretty tall Micromaster when transformed though.

Next we have Missile Run. His vintage colour scheme is pretty strange with the blue wings, tail, and cockpit area. It might be more cohesive with the labels applied though. He forms the chest of Sixwing.

His bot mode is pretty unbalanced unfortunately, he has a tendency to fall backwards unless his legs are positioned like they are in this pic. You can see the teal and purple colour scheme that is so prevalent with the Destron version coming to light with the bot mode on him.

Next is Raker, he has a pretty good space shuttle alt mode. They don't look too different from each other in shuttle mode. Just a few details different. He forms the right arm of Sixwing.

In bot mode you can tell the difference quite easily with the blue head and legs vs the monotone reissue.

Chaingun, who doesn't really form anything on the combined mode, (you stick him to the back of the figure) is a fairly decent little chopper. The blades are removable on him.

He is the only Micromaster chopper that can't use his blades as an arm mounted weapon.

Flanker looks very similar with the blue vs teal in jet mode. He forms the right leg to Sixwing, him and Falcon are the only ones that are really interchangeable in combined mode.

He has a slightly different transformation (unkink the legs and fold the wings back) I love that they painted his eyes and the chest diamond shape in the reissue.

Lastly out of the six, we have Falcon. His Destron repaint is by far my favorite repaint of them. The extra painted details on the jet mode just pop and help to sell it. He forms the right leg of Sixwing.

In bot mode, the little extra details on the reissue look great.

The combined modes of the pair really look good. I don't know which I like better.

These figures also make use of their kibble by it forming a decent jet for one of them to ride in (the open space in the back has a Micromaster standing peg.

And to finish off the review, some group shots of the two sets on their own.