Return of Convoy Sixliner and 2003 Reissue 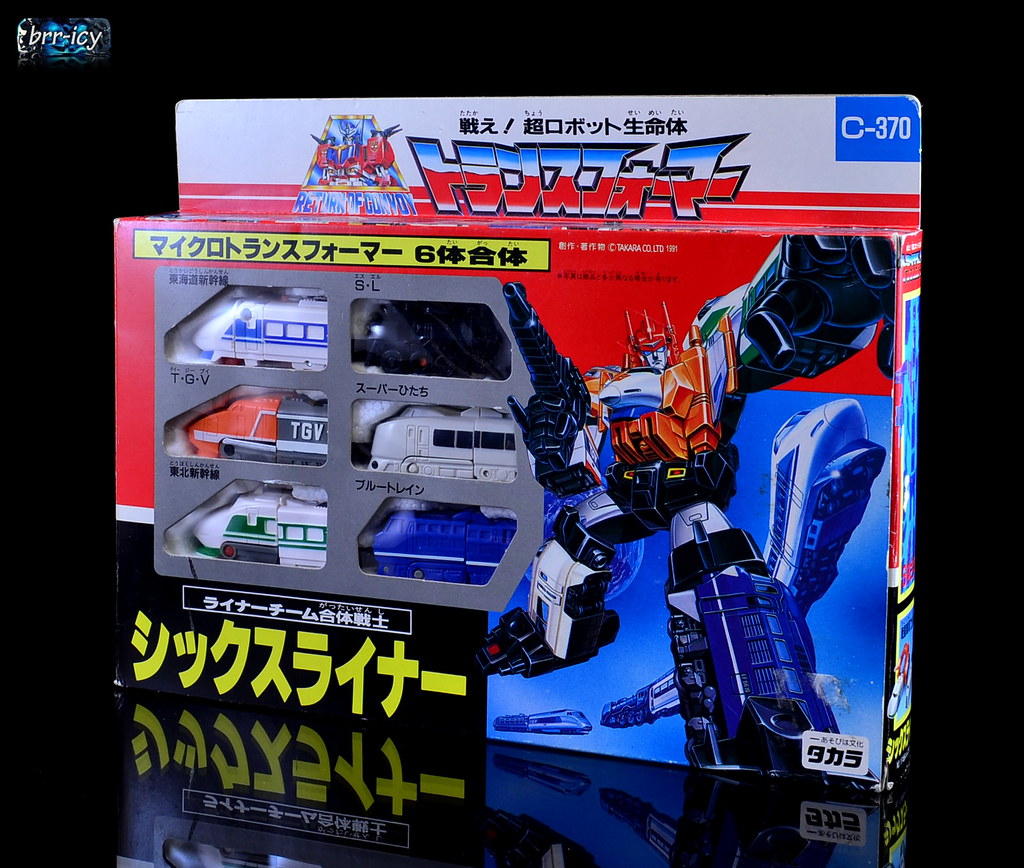 Unlike Sixwing, they stuck very close to the original colours with him in the reissue. There are some details different which we'll get into later.

First one up for them is Joe... Ok, the names on a lot of this set are pretty lame, bordering on worst TF names ever. lol. I'm not sure if the star stickers came with them, or with Sky Garry, but I'm not going to remove them anyways. You can see they added a bunch of smaller details to the train mode but in doing so, they took a couple away. He forms the right leg.

In bot mode, the reissue loses the Autobot logo from the chest and the shin detail. But it does gain face paint, which is a plus.

With the train combiners, the kibble doesn't form a jet, it forms extra cars, and in the case of the waist piece, I'm not exactly sure what it does, but I did include a pic of what it shows on the box. Joe's car looks pretty decent, pretty heavily armed.

Next up we have Alan. His major change was losing the lights from the front of the engine. There are a few more painted details, namely the windows and continuing the stripe pattern on the side onto the arms to make them blend a bit better. All six have an Autobot logo added for the reissue as well. He forms the right arm.

In bot mode, there are mid shin stickers and an Autobot logo on the chest. the reissue lacks both of those details.

Next we have Deego. Excuse the dust on him, didn't notice it before I shot the pics, and it was too late to do it over until later tonight when my cam is charged. He's the only steam locomotive in the set, and I think he pulls it off nicely. The reissue adds some white and gold detailing to the train mode that just pops. He's the not needed for combined mode back figure.

In bot mode the reissue loses the shin labels and I think someone might have misapplied the Autobot logo on him since it covers the chest sticker. The reissue gains some chest and abs detailing.

Remember the waist piece not doing anything? Here it is. Going to hazard a guess at twin cannons?

Next we have Leaf. There is a  ton of new paint apps on this vehicle mode. Arm stripes, windows, and the front lights.

In bot mode, he loses the knee labels and Autobot badge. He's the left arm.

He carries the last of the combiner kibble. Not as convincing as the one Joe pulls, but still ok.

Night gains a lot of added tampos on his alt mode as well. Makes the original look pretty plain from the side. He forms the left leg.

In bot mode, he loses the feet labels and Autobot badge, but gains silver paint on his face, separating the visor from the mouth area and a yellow chest.

Lastly, we have Spark. He gains windows, lights, and the sides of the bottom stripe. He forms the chest.

In bot mode, he loses the feet detail and Autobot logo, but gains a yellow arrow on the chest in it's place, some ab detailing, and the facepaint is changed from yellow to silver.

Combined into Sixliner, you can really see the difference the labels make. From the shoulder wings, to the thighs, to the red toes and waist details. They also added some painted eyes on the reissue.

Now, hopefully the part I've been waiting for arrives tomorrow so I can do a review I've waited a while to do, no fault of anyone's except the postal system though.