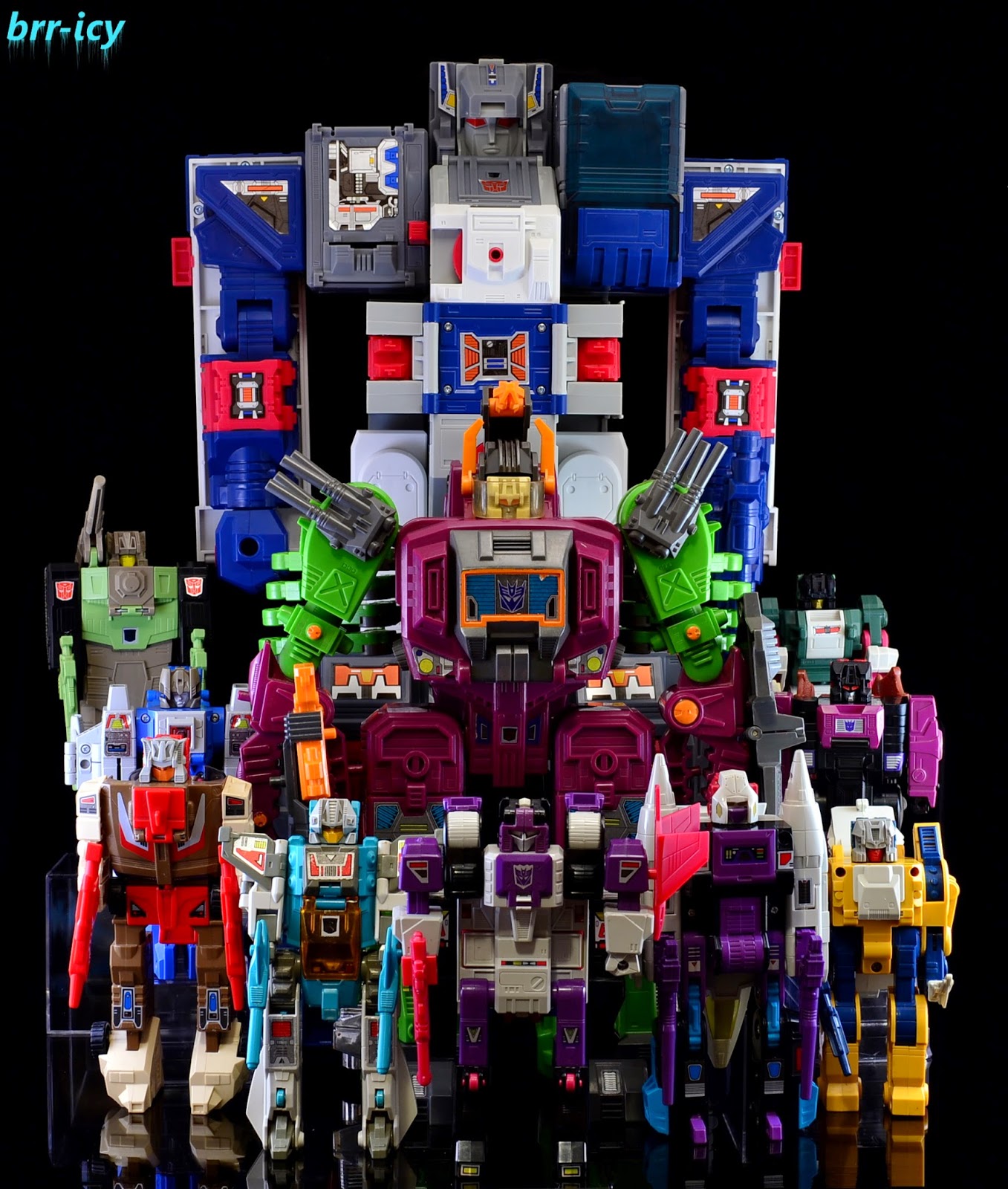 Pictured with the regular Headmasters here, you can see the sheer scale of them. Unfortunately Scorponok wasn't made as big as Fortress.

We'll cover Scorponok first. He's the second largest G1 Decepticon behind Overlord. His Headmaster is the same size as the regular ones, but is augmented by the helmet to appear larger. 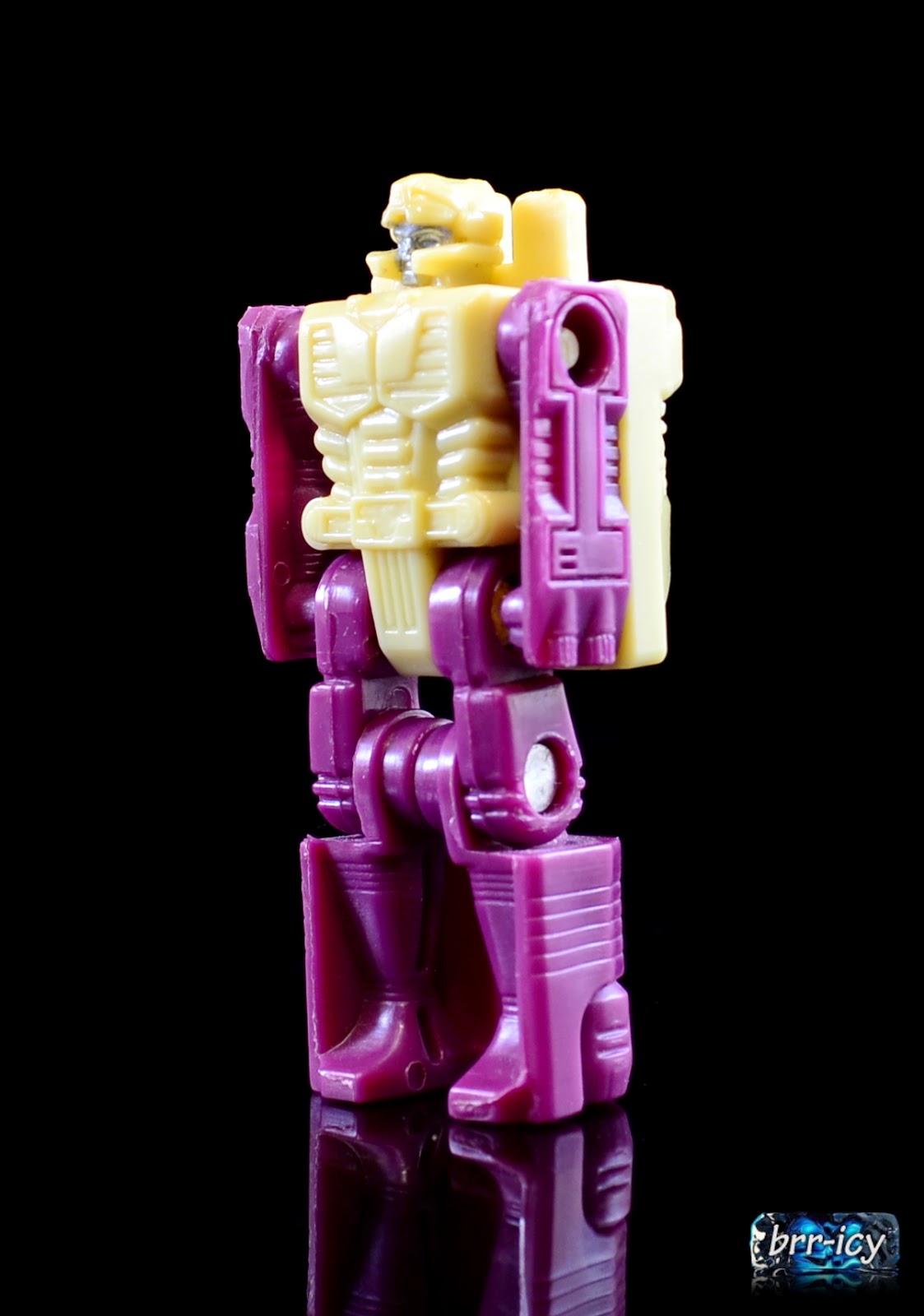 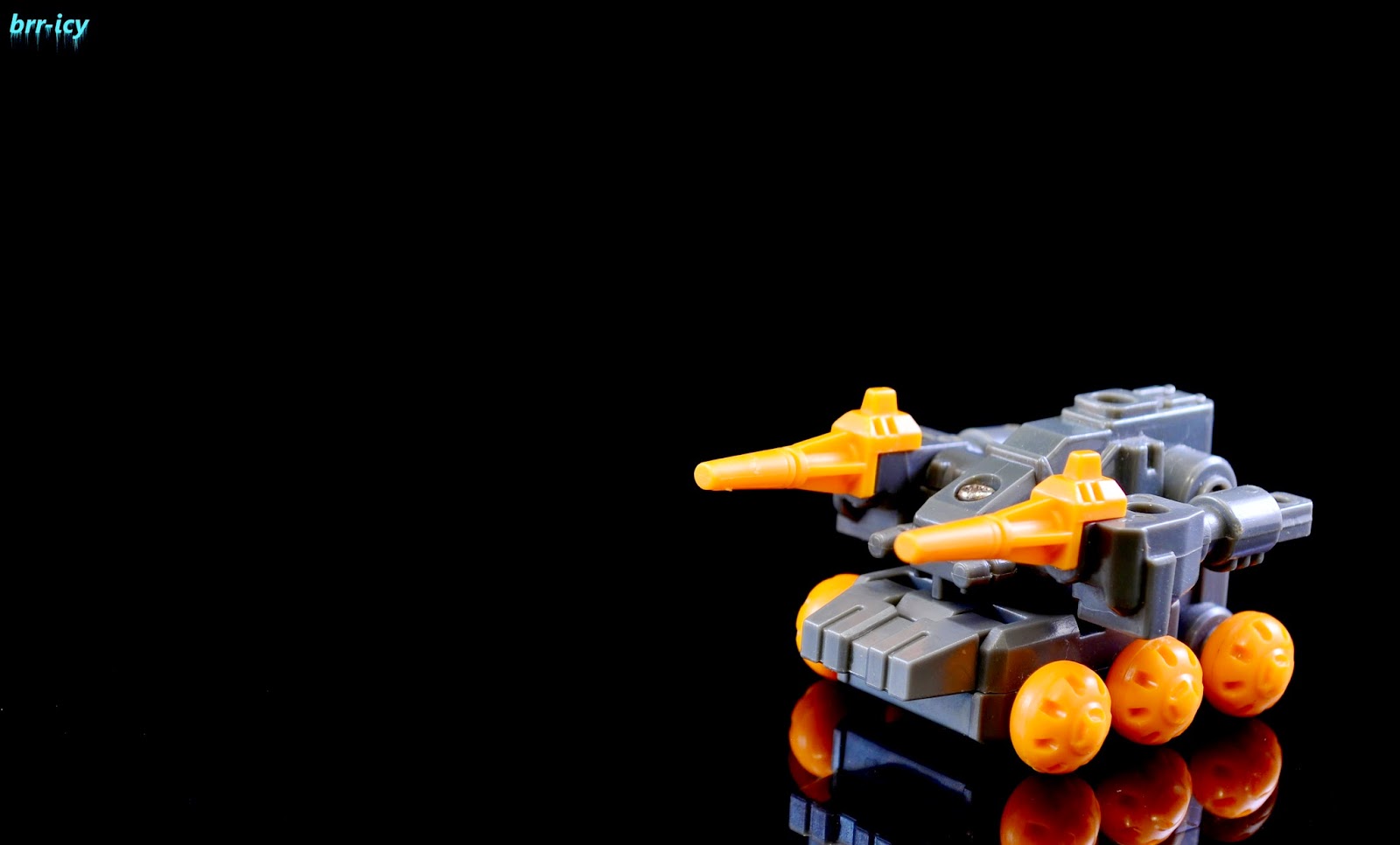 Fastrack basically unfolds and he is in robot mode, all you have to do is move the guns from the shoulders to his hands. 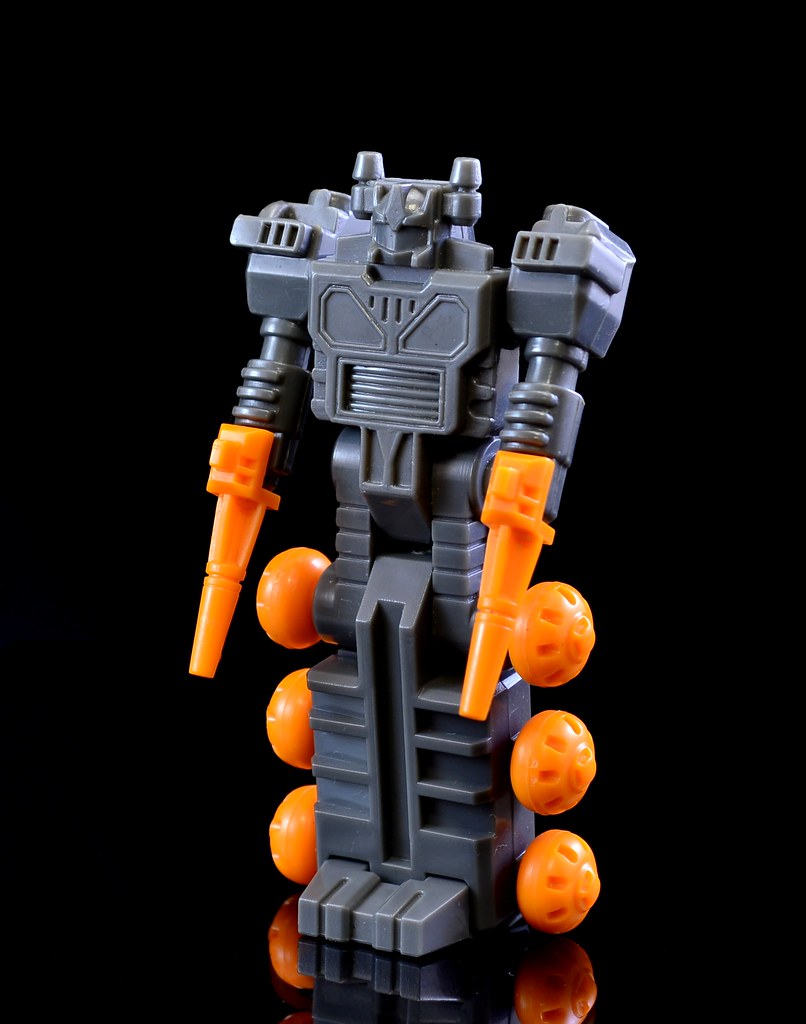 Now onto the main figure. His mobile alt mode is a scorpion. He has small rubber wheels on the bottom that when you roll him along, the legs look like they are walking. this mode is pretty articulate in the arms and tail. The chest can open for the headmaster to store/ride inside. 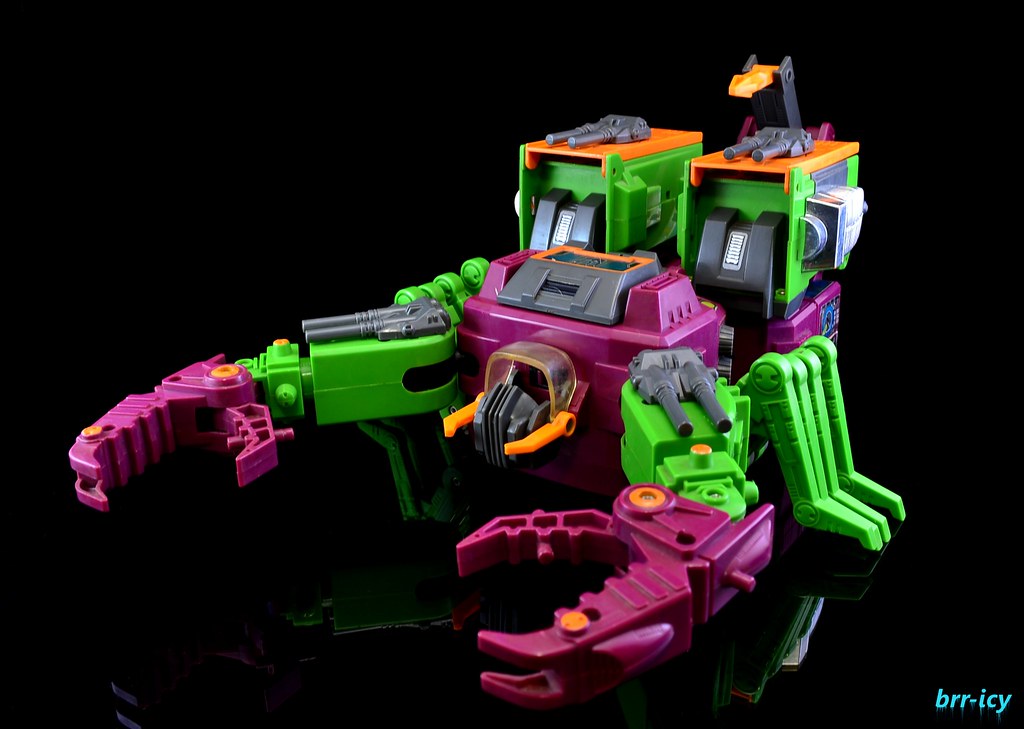 In base mode, he gets pretty decently sized. With an elevator on one side, a repair bay on the other, and the chest plate becomes a launcher when the button is pushed.

In robot mode, he's pretty impressive, nice and stocky with a shield and a gun for armaments. I picked him up from Michael in Scotland along with a lot of the previous bots that have been posted. I've since completed him. 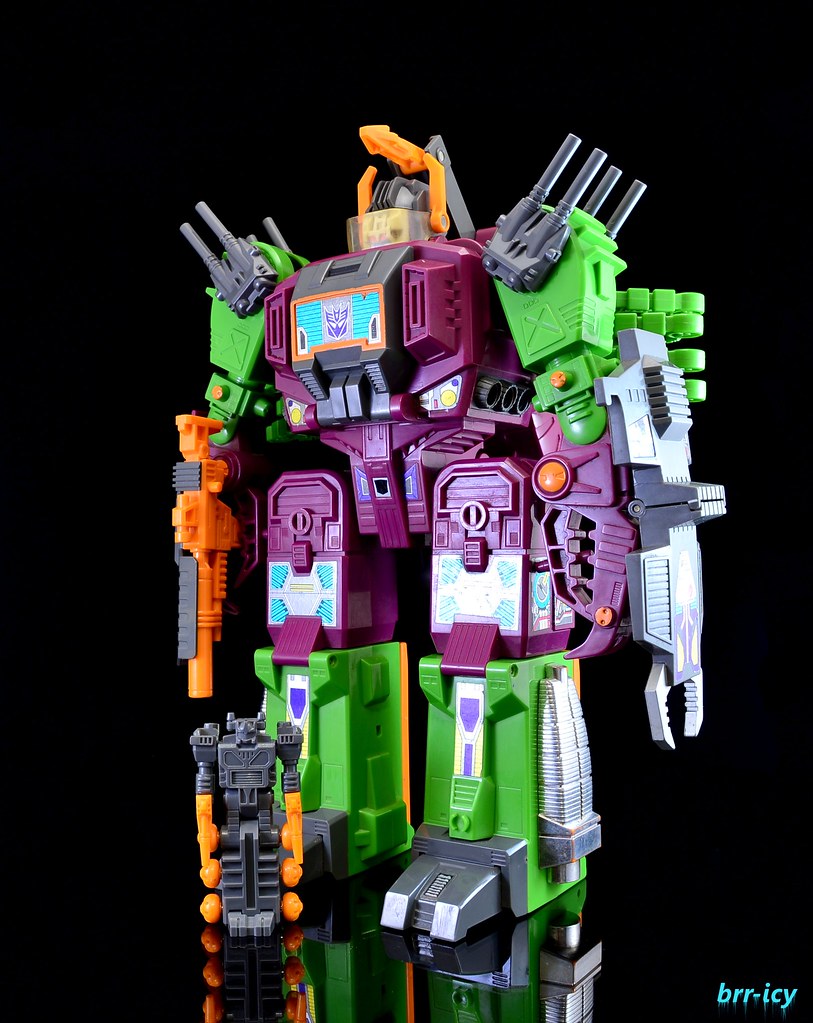 Fortress Maximus (in this case the Encore reissue) is the largest Transformer ever made. The new Metroplex might have an inch on him in height, but he is probably half the weight and girth of Fort. He is a double Headmaster, meaning his Headmaster has a Headmaster. The small head is Spike, the same Spike from the cartoon wearing a suit of armor. 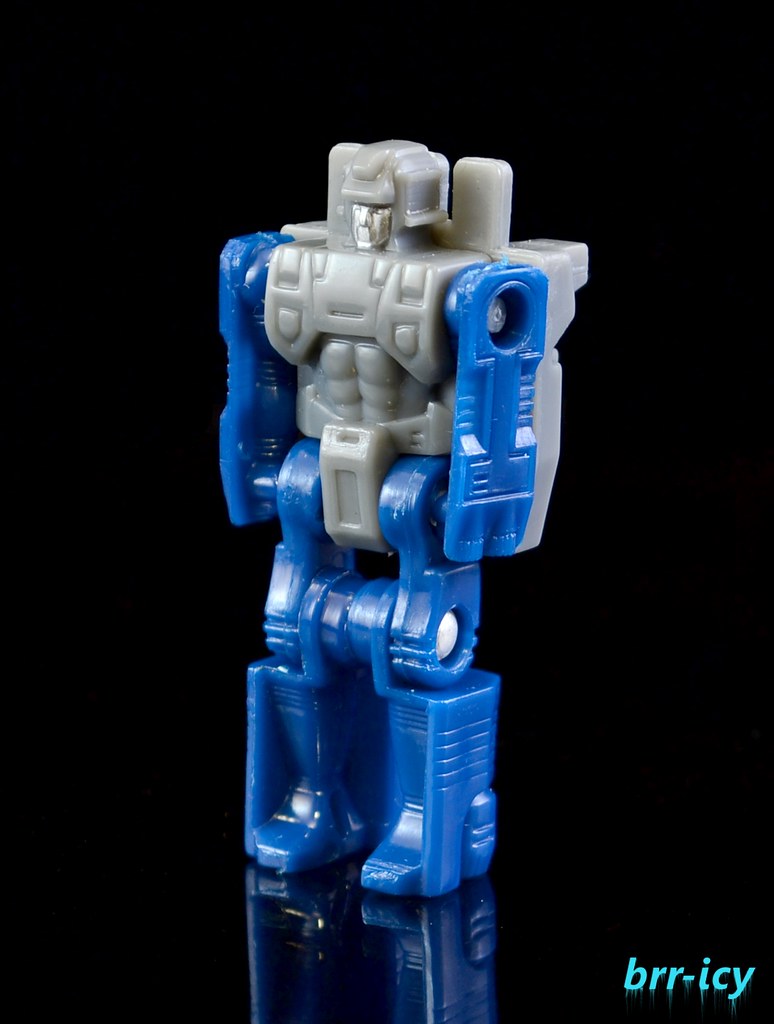 He is the head for Cerebros, who transforms into the head for Fortress Maximus. He can also become a computer for the city. The reissue is based on the Japanese version, in which both the headmaster and large figure have a sword. In Japan, Spike was called Fortress, with the Cerebros bot and Max bot both being transectors. 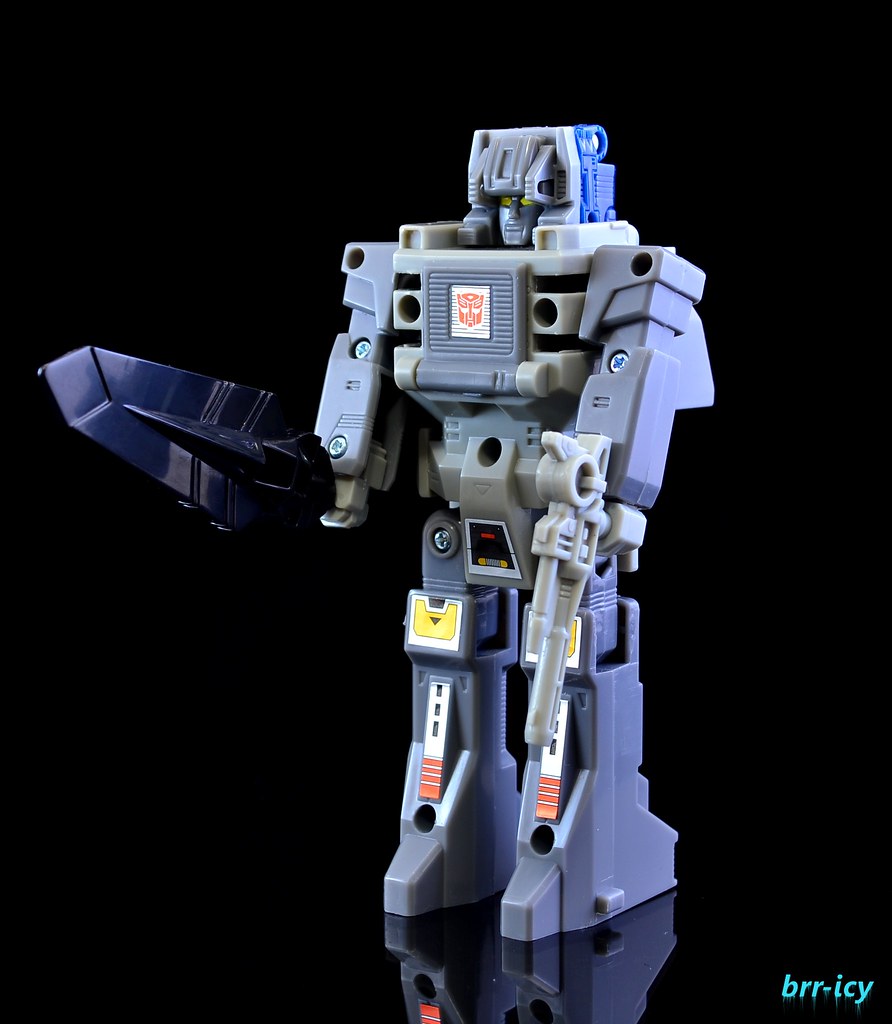 His tag along bot is Cog, it's made from Gasket on the left and Grommet on the right. 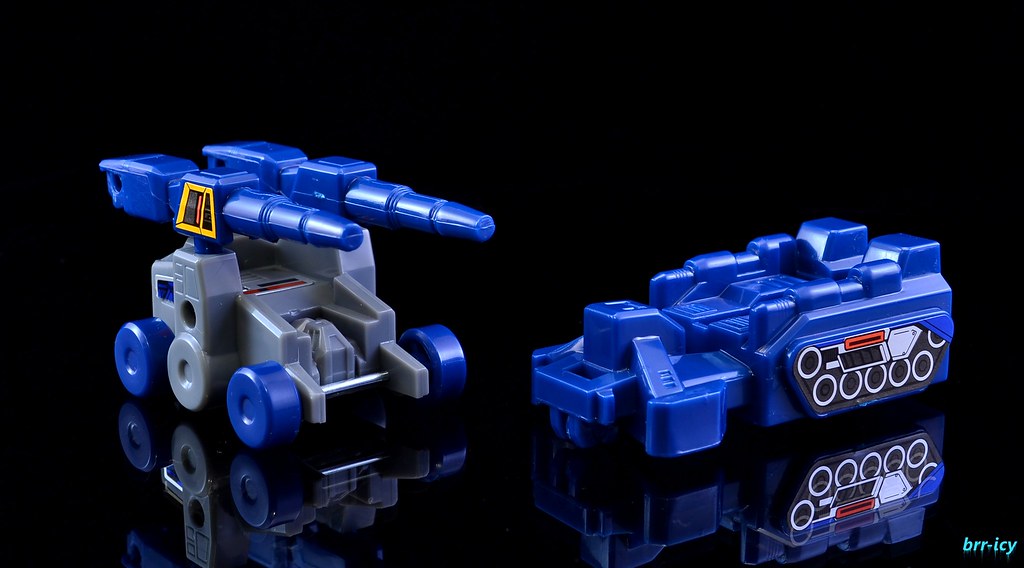 He also carries a small gun like Cerebros has, they were very difficult to get a hold of pre-reissue. Now, if you want straight vintage parts, even harder. 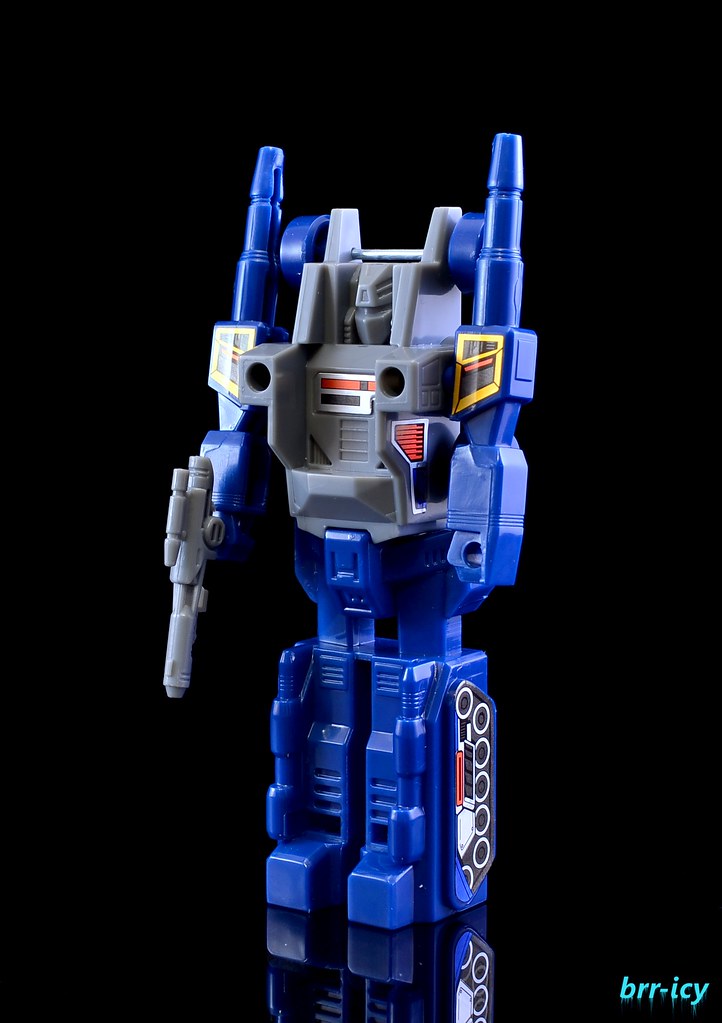 His mobile alternate mode is a space cruiser, which is impossibly large and will not fit in it's entirety within the light box. Best I could get out of it is this. Spike can fit in the cockpit at the top. There are a few weapons on this mode as well. 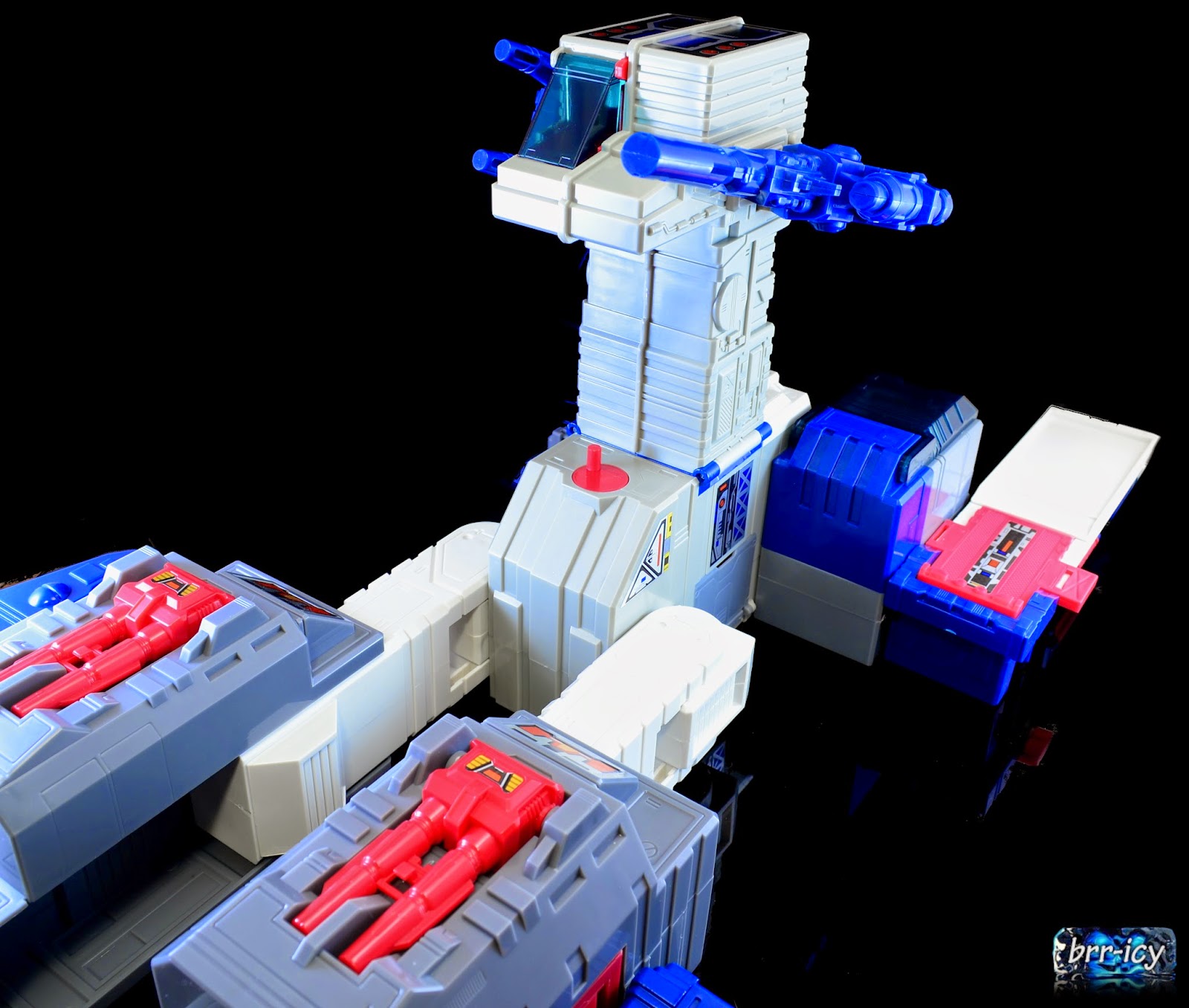 His base mode is pretty big with a bunch of play features. There is an elevator in the center that goes down to two gray ramps (you can see them closed above in the midsection) when it reaches the top, you can push the button on top and it will launch whatever you have in there. The one side of his leg has a jail, and the other has a small room. The ramps on his arms have a slider launcher on them, and the radar can be spun with a wheel on the side. You can also see Cerebros in his computer mode here. 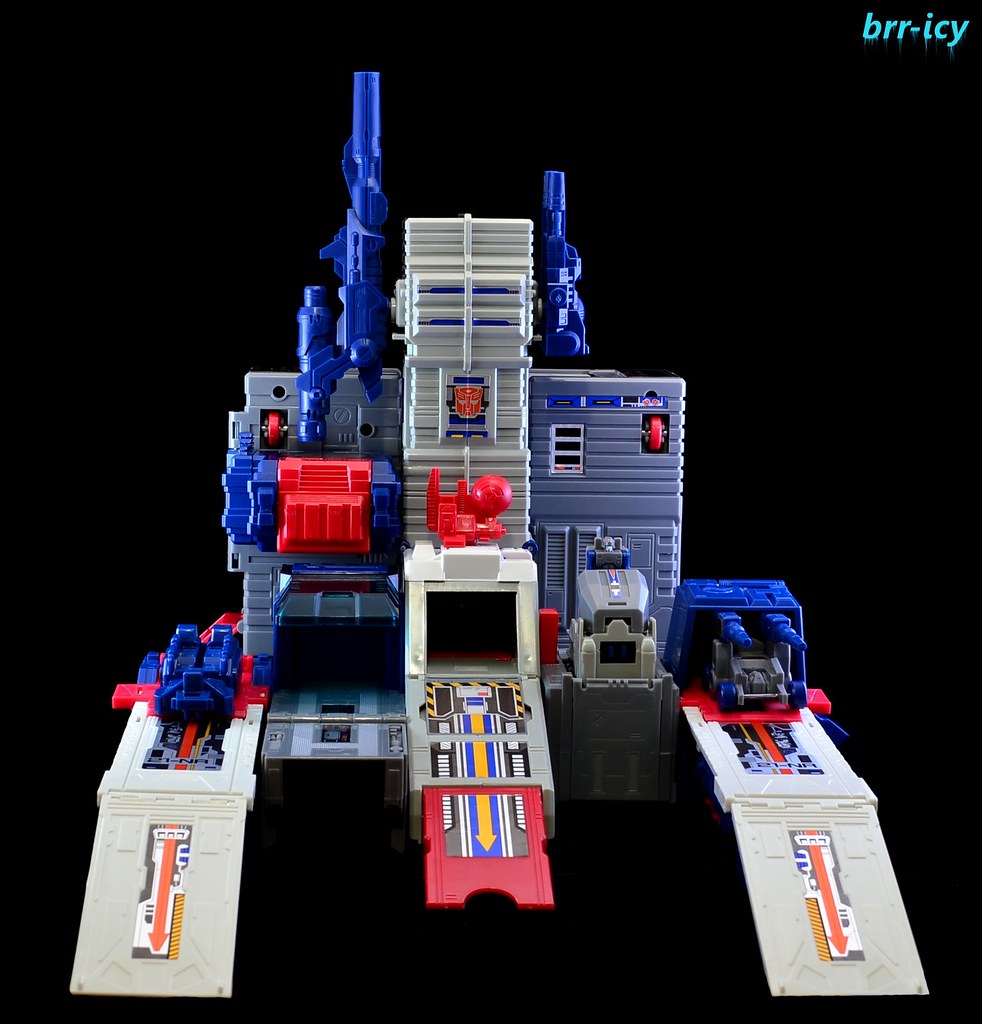 In robot mode, he stands just shy of two feet tall. The big sword is too hard to fit in the box as well, but I have him displayed with it. He has a large array of weaponry in this mode as well. You can store Gasket and Grommet in the fronts of his feet to become other guns. You can also open his forearms for a small double cannon, the backs of the hands rotate around to reveal a pair as well. The helipad can also be swung around and a pair of guns pop out of the front of it, add in the giant hip cannons, and the shin ones, and he's pretty much got guns coming from everywhere. 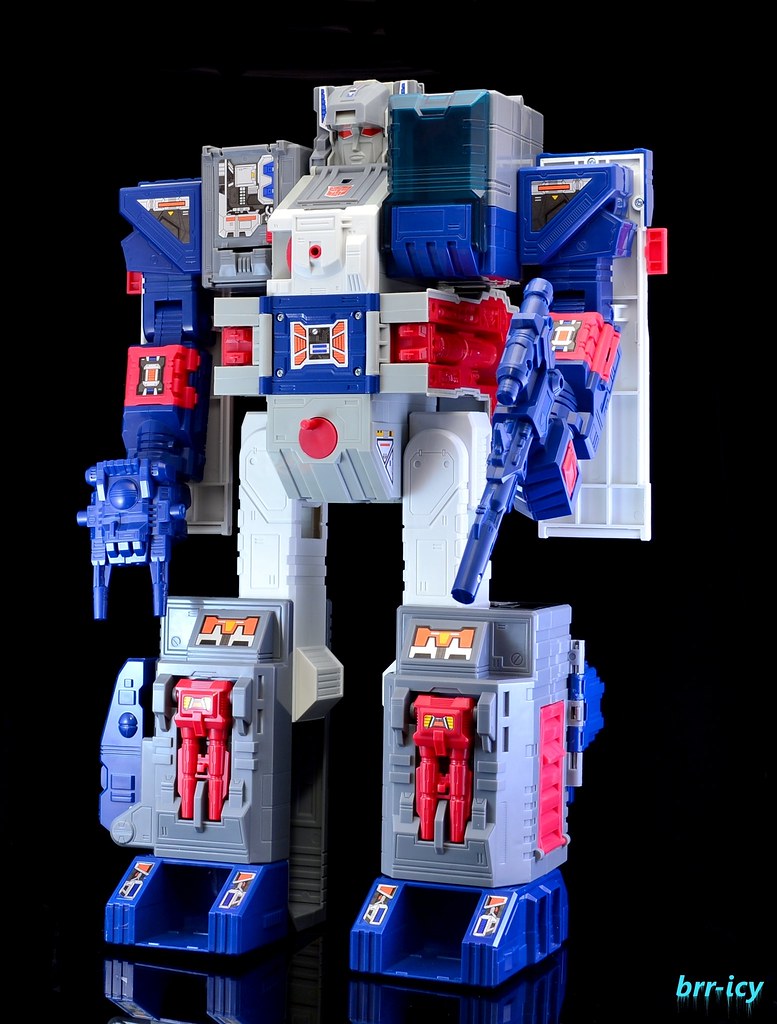