By Request: Metroplex and Trypticon

These two were the first "real" base-formers unless you count Omega Supreme. Metroplex was originally designed for the Jizai Gattai or Free Combination subgroup of Diaclone, which was scrapped in favor of releasing them in Transformers. The four first Scramble City combiners were also part of this. There are pics out there of what Metroplex would have looked like, but I haven't seen any pictures of the Diaclone combiner sets.

I actually sourced the Trypticon for a friend a few years back at a great price, after I had sold my G1s. The buyer had a lot of my old collection. For this and one other piece, I jokingly said that if he ever sold them, that he had to sell them back to me at the same price. In the end, I'm glad I did, since he ended up clearing out his entire collection. I think I have everything back I sold except one piece. Metroplex came in the giant lot this summer.

Both Metroplex and Trypticon can incorporate the combiner torsos as add-ons to their bases. Trypticon can add two. Metroplex can add all four, plus four of the limbs. Both are triplechangers with a rolling battle platform and a base mode.

Metroplex's robot mode is around the size of a very bulky leader class toy. He has shoulder and hip articulation. Like a lot of the 1986 figures, he came in two variants, plastic wheels or rubber. Also in his case, the chrome on the thighs was changed to a sticker on the plastic wheeled version. I was also informed that there was another screw added to the waist section on the plastic version to prevent him snapping in half (thanks Ignition Terminals) On his Left shoulder and chest, there are hidden weapons panels, and almost all of his weaponry can be added to this mode. 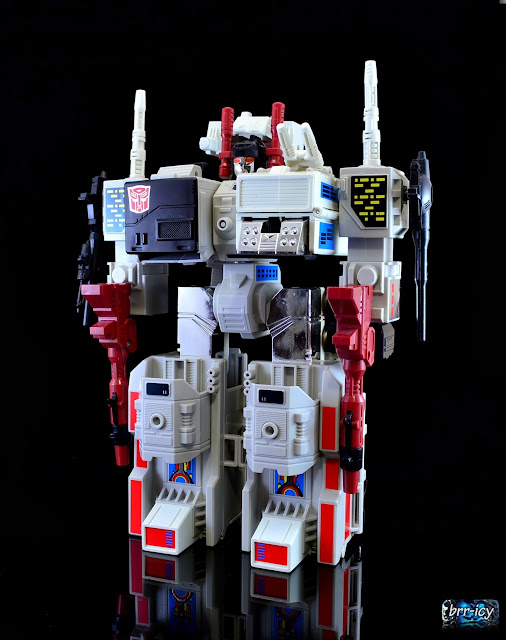 Like I had mentioned earlier, there are ports to attach the Scramble limbs on his shoulders and just below his knees. What purpose it serves, I don't know, but there is an instruction sheet out there which has this particular configuration on it. 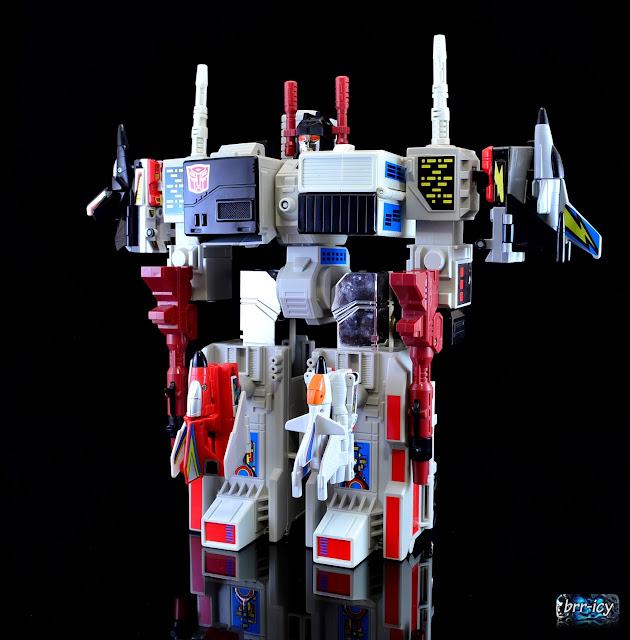 Six of his guns form Sixgun, one of his three partners. There is also Slammer the tank, who transforms into a tower for the base mode. On the Encore reissue and the prototype there was a peg on the back of Slammer's turret that would plug it into the other tower. Unfortunately, it was removed for the G1 release. Lastly, we have Scamper. He's a very simple black car. Nothing overly complicated about his transformation, but still a neat little add on to Metroplex. All I know is, he was a pain to get a good shot of on the black background. Metroplex's first alternate mode is a battle platform. It rolls,and the arm guns and shoulder gun rotate up and down, and the red rifles can go side to side. His main alternate mode is a city, there is a Helipad on one side. The bay with the ramp has a launcher built into it, Adding on all the combiner leaders, you get Scramble City. which is pretty massive. Silverbolt, Onslaught, and Motormaster form extra ramps and places to put more figures. Hotspot becomes a repair bay complete with arms. Trypticon is basically a mecha-Godzilla. He is one of the few G1 figures that is motorized, and it is done rather well. In dino mode, the motors make him walk, and as his legs move, so do his arms, making it more "realistic."

He's fairly well articulated, with the moving arms and legs, the "thumb" of each of the hands is articulated, so he can hold small things rather well. His neck also moves up and down, with an opening jaw, and his neck can turn due to transformation. The gun on his forehead can be hidden with the orange panel. He comes packaged with Brunt, who separates into five towers for Trypticon's base mode. the cannon also lights up as you can see in this shot. His other partner is Full Tilt. a small and simple purple car. He's more solid than Scamper. His gun is also one of the pieces you don't want to get the figure missing. He also forms the chest plate for Trypticon. Trypticon's first alternate mode is also a battle platform. in this mode, the motor spins the guns. The three main cannons at the back can go up and down, as can the two small ones on the front. Like Metroplex, Trypticon is also a base. Instead of the guns turning, they are replaced by radars. The purple panel that Full Tilt is sitting on can launch him down the big ramp. There is a helipad on either side of the base. There are two connectors tha you can also add to him so that Onslaught and Motormaster can attach. I love these two figures, Metroplex I had as a kid and still didn't know all of what he could do. Trypticon I always looked at in the checklists, but I never owned one until I was an adult.