Something you don't see everyday, The Return of Convoy "Triple Combination Battlestars Attack" which is made up of Star Convoy, Sky Garry, and Grandus. I pieced this set together over the summer, Two of the pieces i got at TFcon, and the third I got a couple months ago. 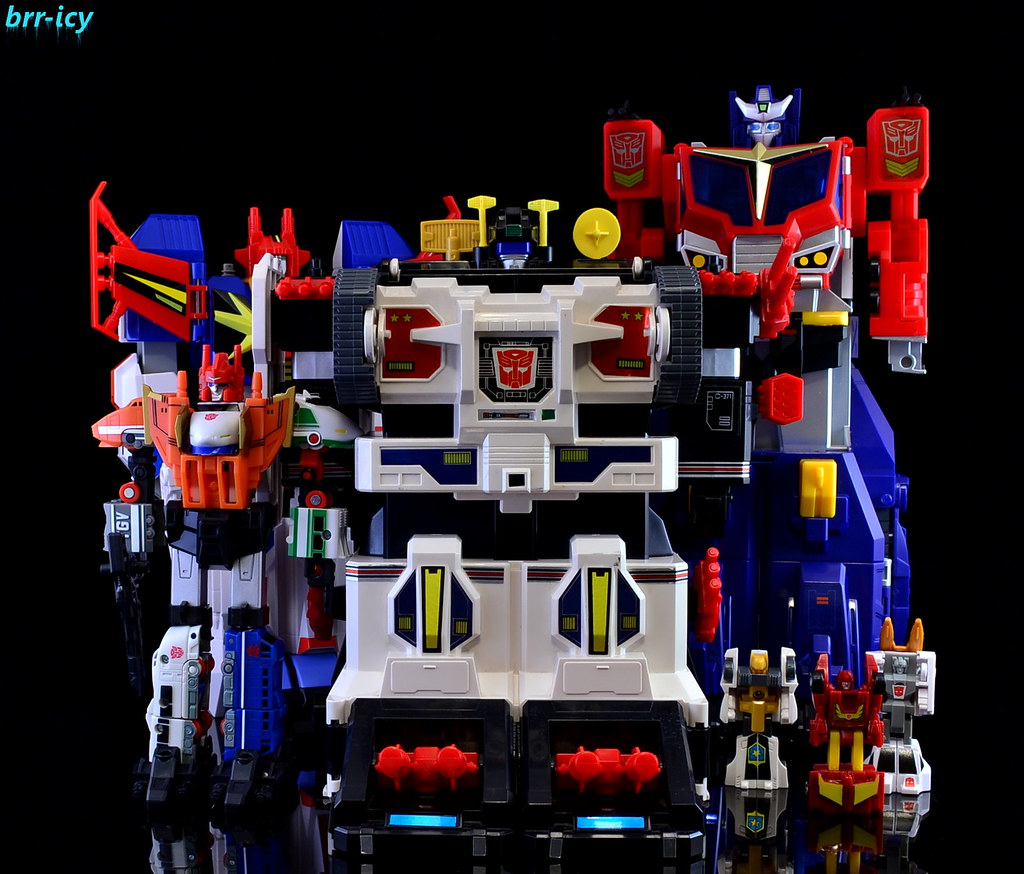 First up, Star Convoy, He comes with a Micromaster Hot Rod. and is a long nosed semi. The treads on the trailer are motorized and can go forward or reverse. the back of the trailer can hold two Microtrailers, and the yellow buttons on top will activate their Micromaster launching feature. Other than that, not a lot going on with this mode. He comes packaged with the unnumbered black Microtrailer. 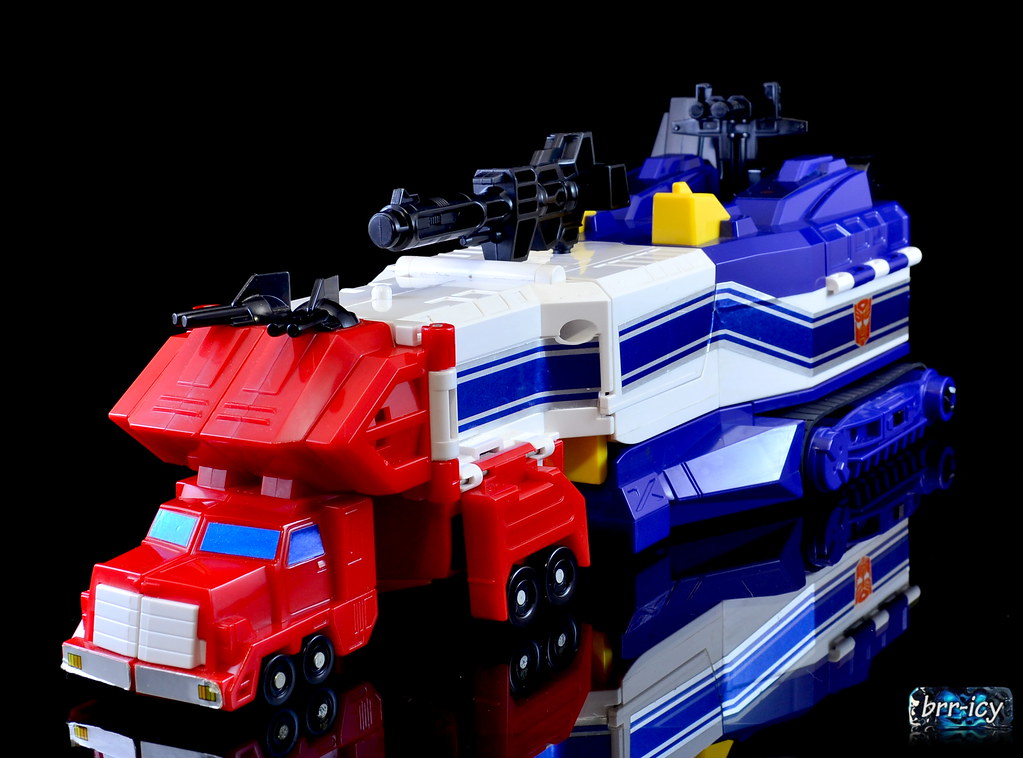 Bot mode is big, the arms have an elbow and shoulder joint, and the treads can make him "walk" with the addition of the wheels on his feet. 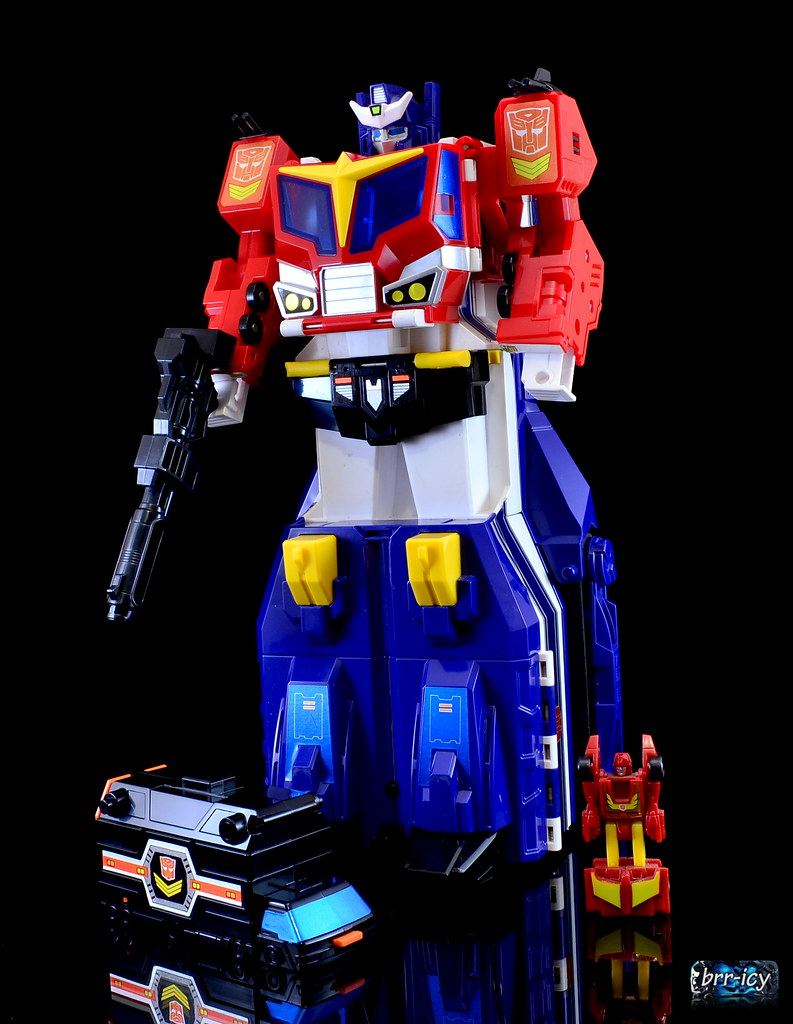 Base mode is pretty cool, the Microtrailers are made into a garage type side to it, the other side, the treads make moving sidewalks, and the turret that Hot Rod is manning rotates. the back ramps kind of launch the micromasters on it down the hill and there's a little room in his chest area

The treads can be detached from him to become Roller, you can also see the connection port for Grandus in base mode on the rear of the tread. I'm not able to fit the base mode in full in my light tent, once I figure out a way to get a good picture of it, I'll post it. 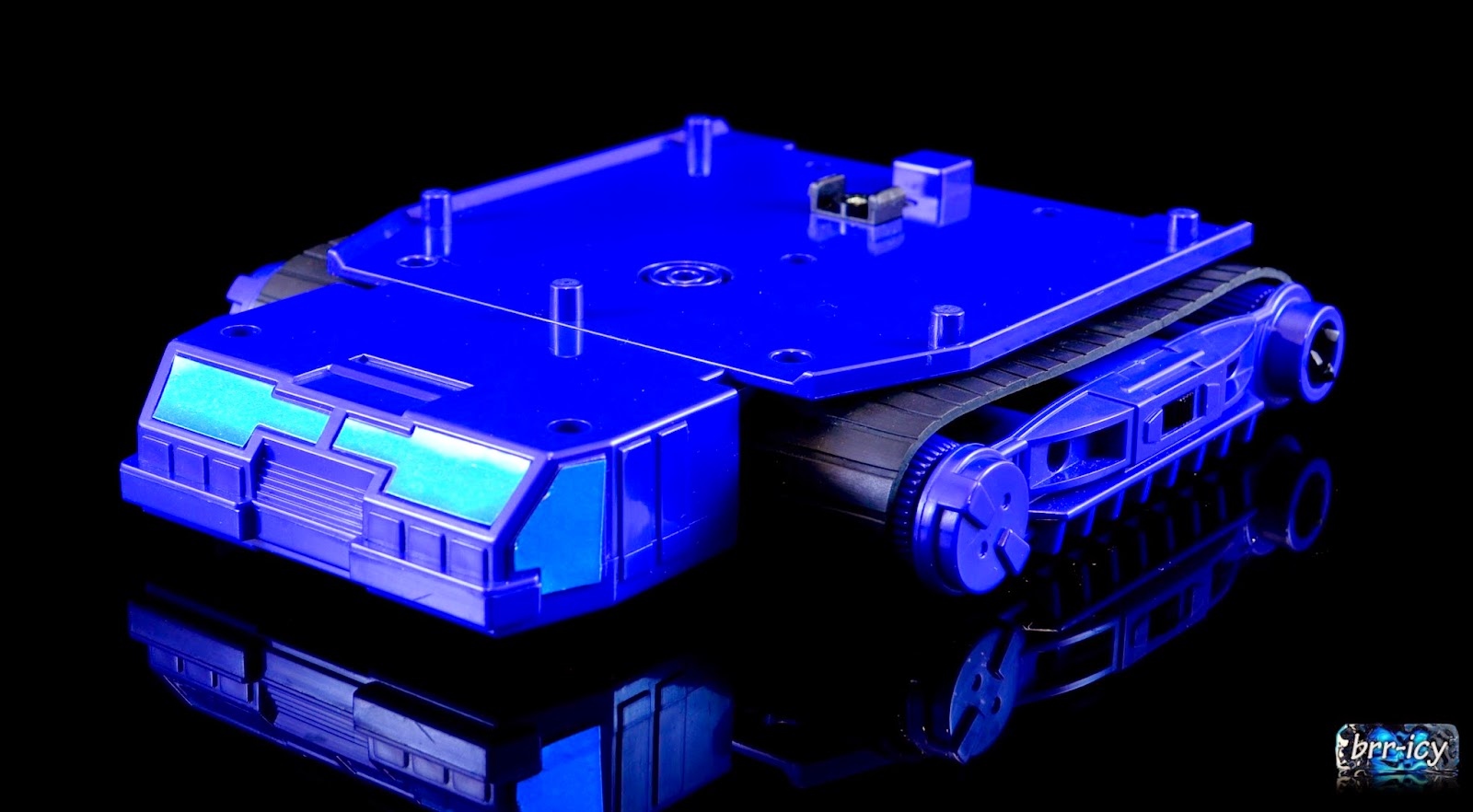 Star Convoy has a small Hot Rod micromaster that he comes with and I have seen that some people will buy him or his reissue just for the micro. Hot Rod is the only carry over character between regular figures and Micromasters 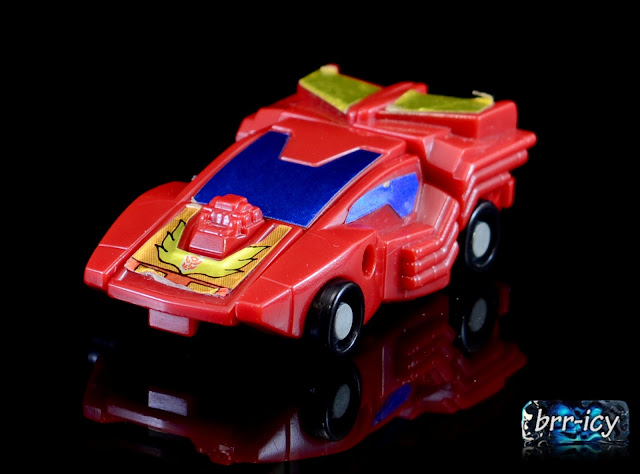 I got the stickers to stick back, maybe one day I'll retake his pics. He's a pretty good representation of the character as well. 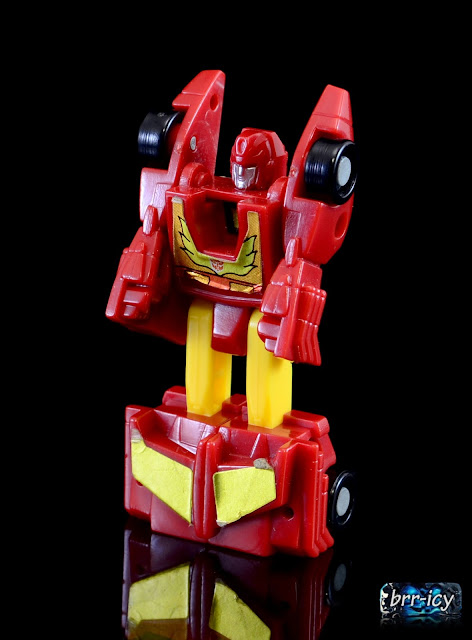 Next is Sky Garry, he came MISB when I bought him at TFcon, but there are a lot of MISB Sky Garrys out there, and I really just wanted a mint one. His jet mode can pick up and drop up to three Microtrailers at a time. He comes packaged with Shotbomber, a small missile truck Micromaster. Also packaged with him is the black Microtrailer #0. There is also white trailers numbered #1 -12 that came with the various Micromaster Patrols and Squads, I'm still on the lookout for those. 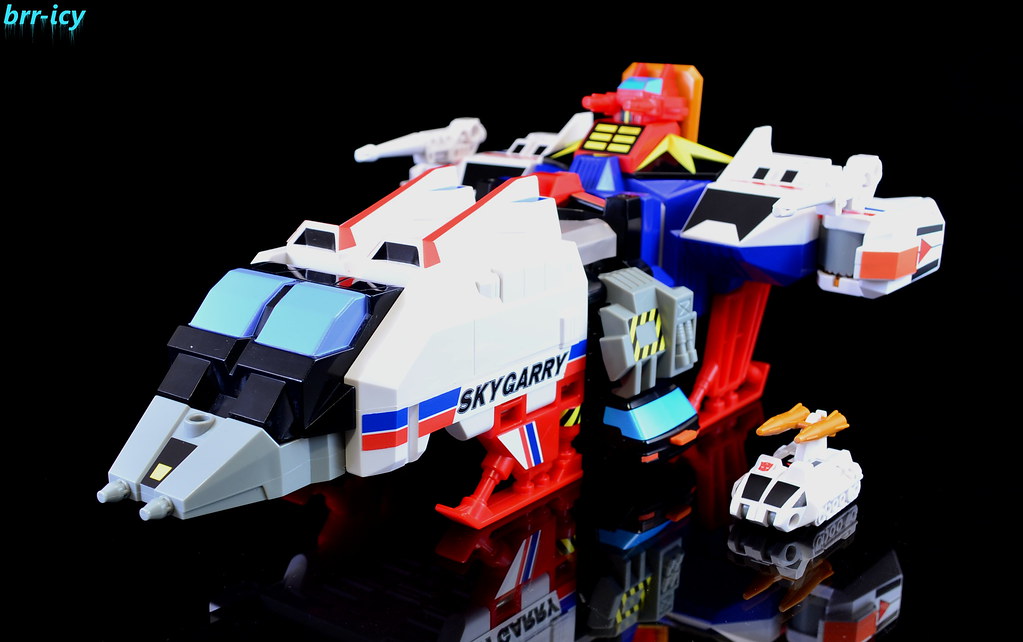 His Bot mode has shoulder articulation, and a couple more joints in the arms. He's around a standard leader class in height. and very solid. 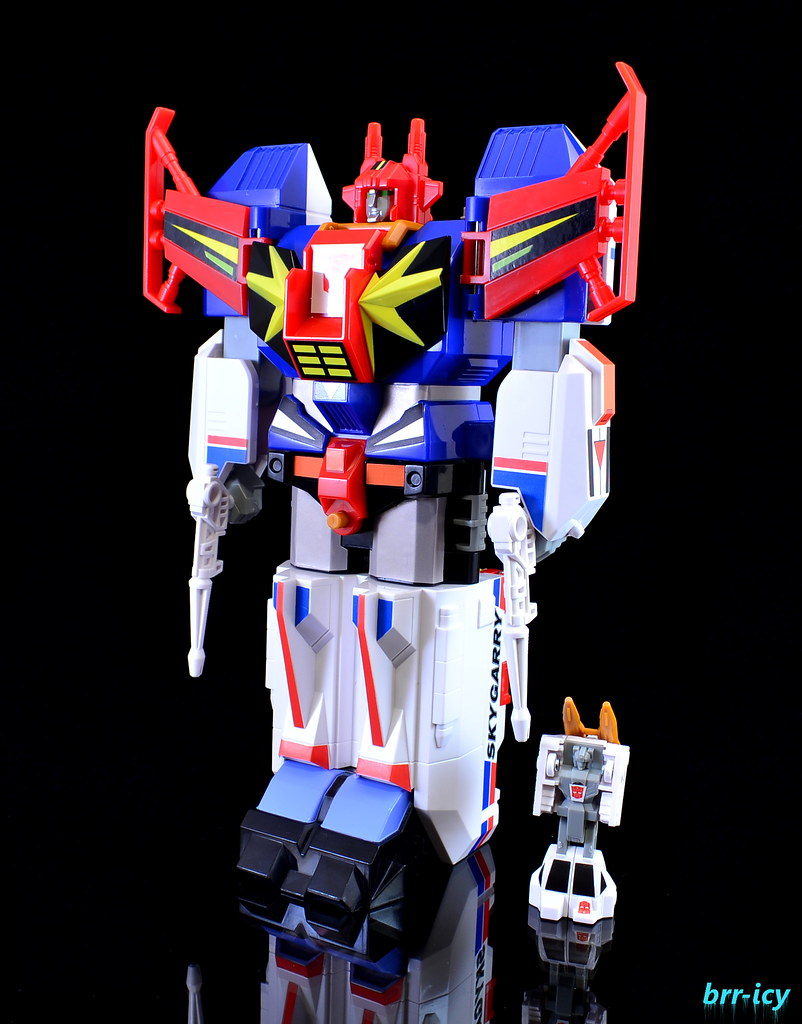 His Base mode is a giant tower with a couple gun emplacements up it, the bottom can have up to three Microtrailers as small addons to it. 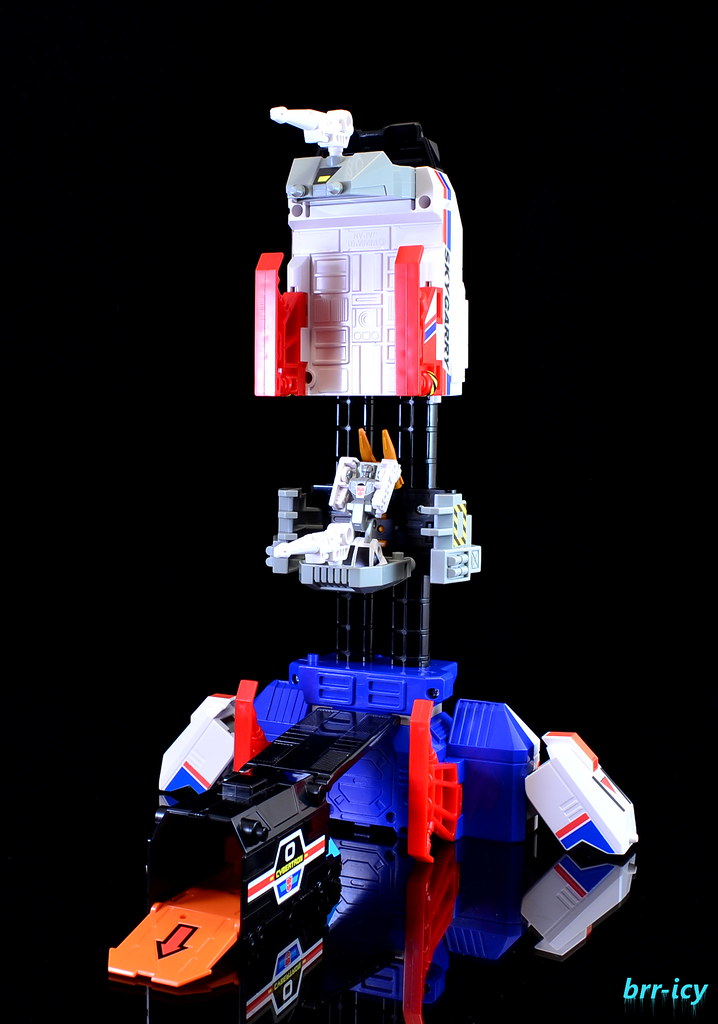 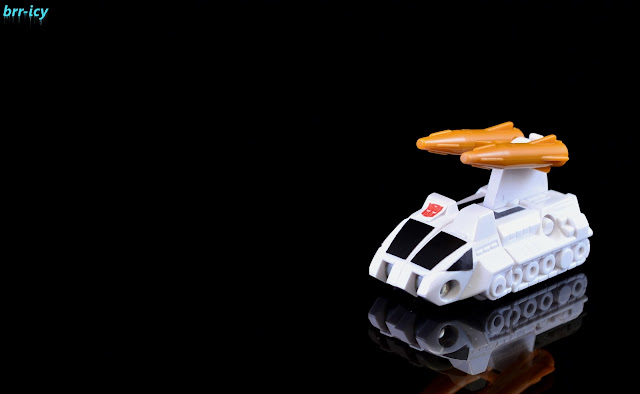 In bot mode he looks pretty neat with the twin missiles over the shoulders. 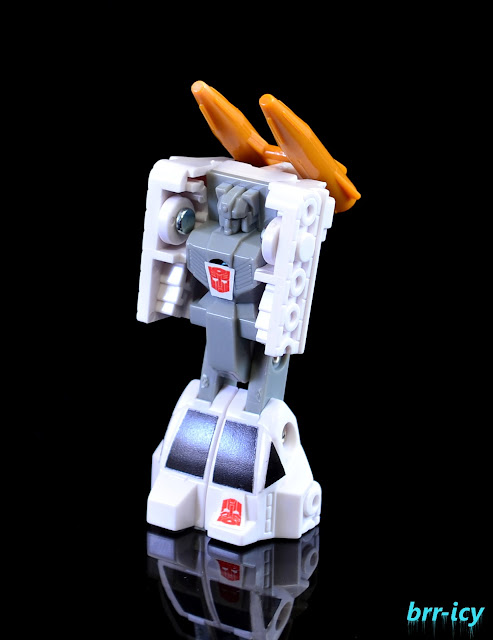 Last is Grandus. A very good friend gave me a great deal on him, it was the main reason I had to track down the other two at TFcon. He's commonly referred to as the epidome of G1 Brickishness, He comes packaged with Spinner, one of the best looking Micromasters IMO. his vehicle mode is basically him on his belly with some transformation to make him sit flatter and add to the flight deck, he packs a lot of guns though, and this mode is very versatile, but more on that later 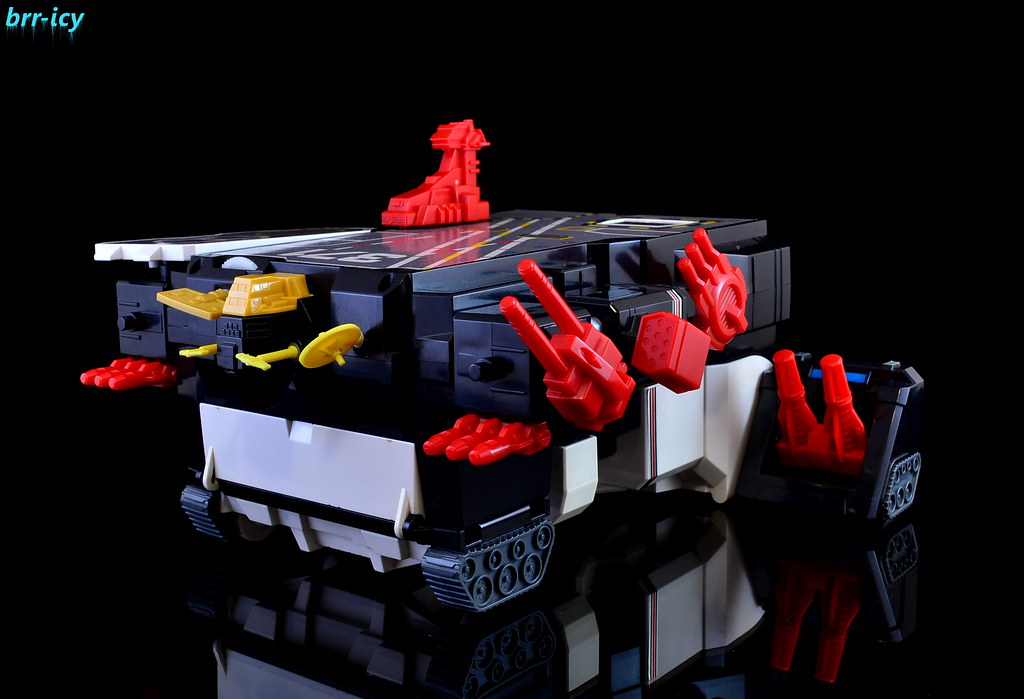 Bot mode has shoulder articulation, the guns carry over to this mode as well as part of the flight deck becoming a shield for his arm 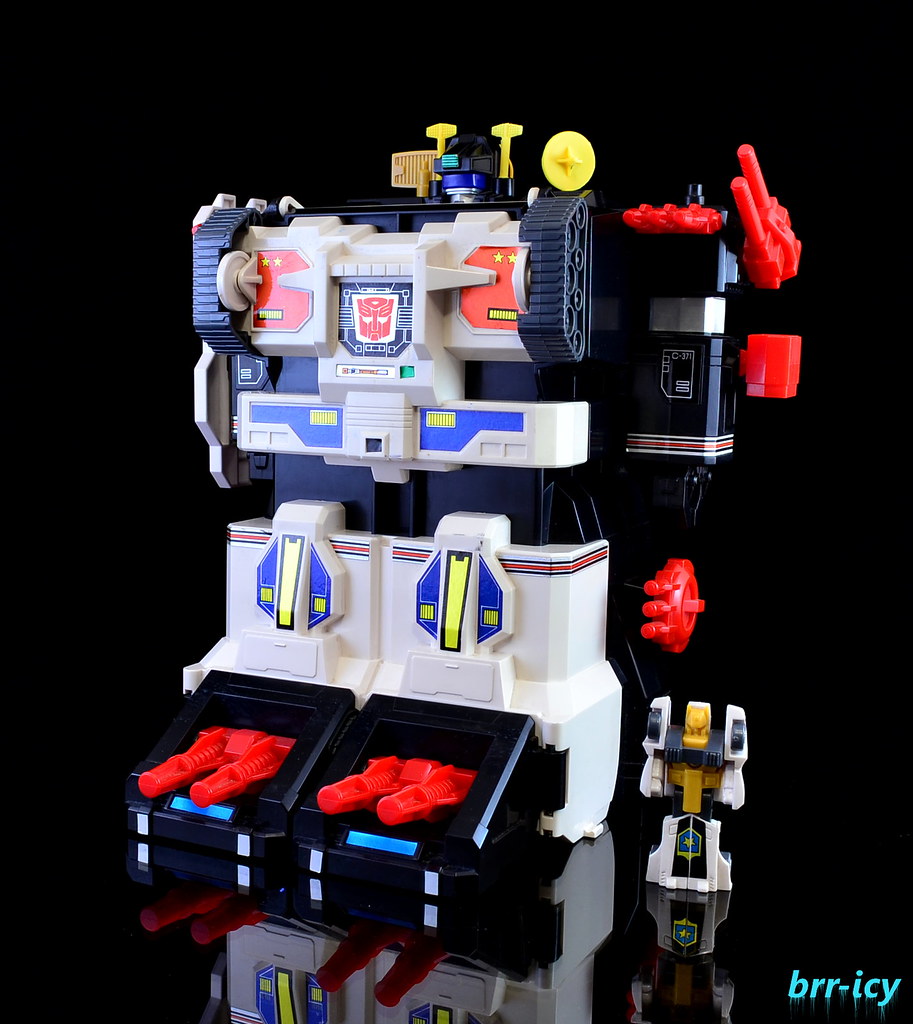 Base mode is where Grandus really shines though, there is a wheel on his back that makes the radars spin and the elevator go up and down, the small yellow piece in the middle is a Micromaster launcher, repair arms on one of the levels, the small white door in the lower back is a docking station for a Microtrailer, and the shield becomes a Helipad for the top of the base. There is also a port on the back of him to attach the adapter from Star Convoy's Roller, to make the elevator and radars work with the motor 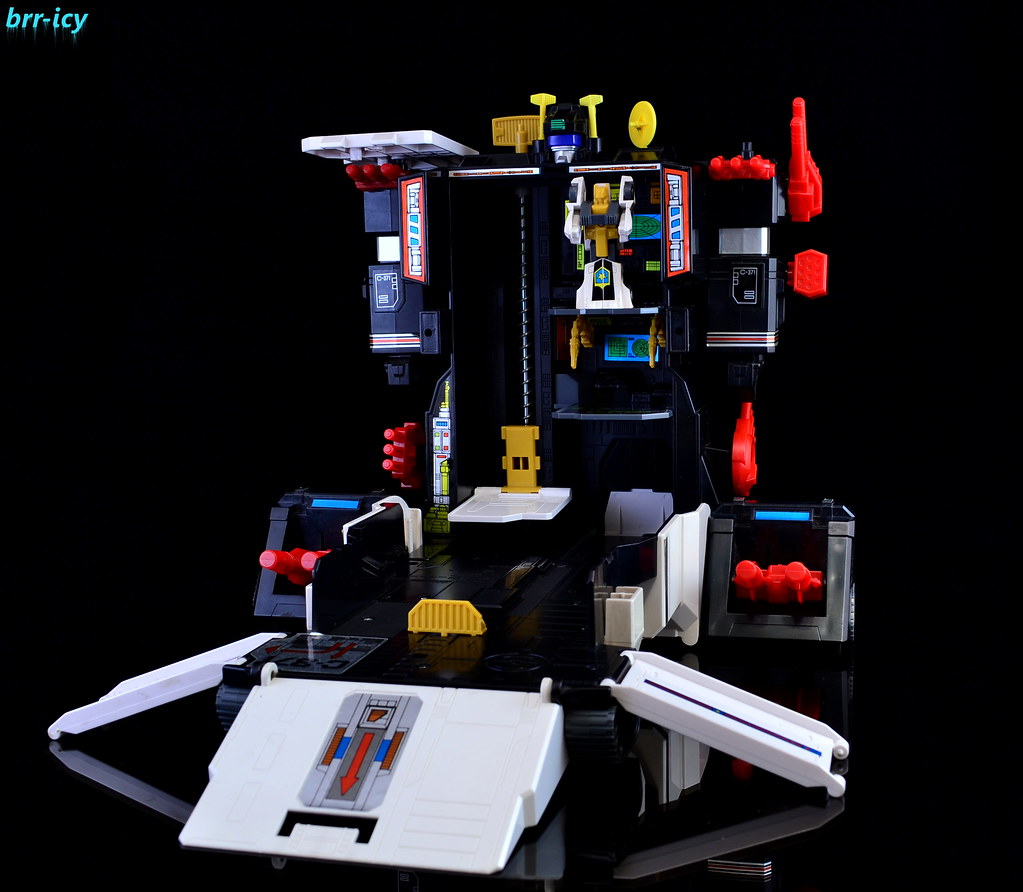 Spinner is Grandus' Micromaster, he's one of the neater of the entire line i think, I really like the shape of the vehicle and how the colours look on the bot. 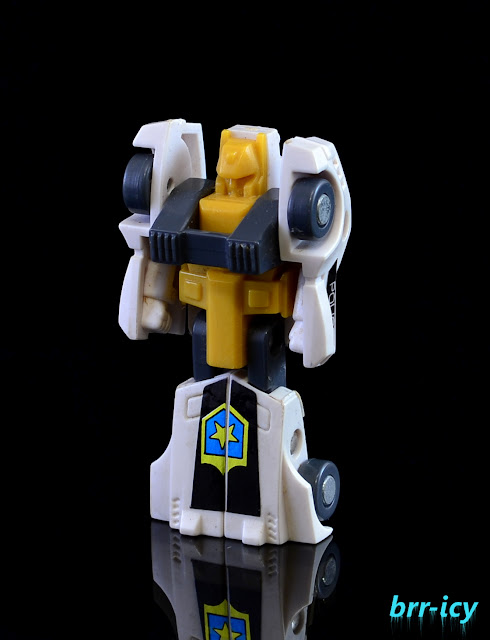 Shot of Spinner in vehicle mode 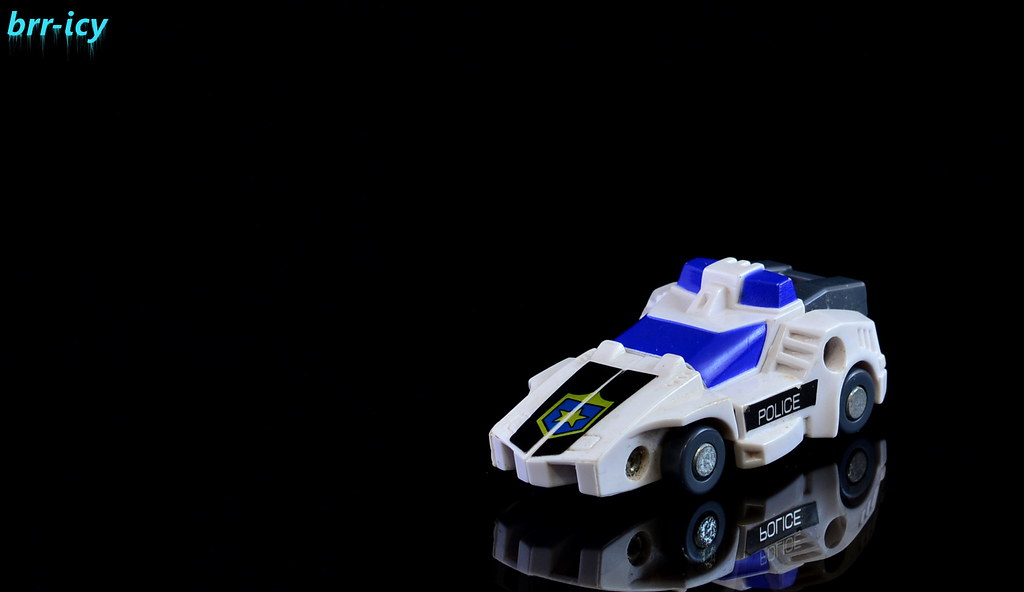 Combined with Sky Garry and Star Convoy, the base is about two and a half feet across. The red connector between Grandus and Star Convoy feeds power to the elevator and radars on Grandus' base mode. I have a hard time deciding beween this and Big Powered's base modes for best city. You can connect about eight Microtrailers to this one as small repair bays etc as well. 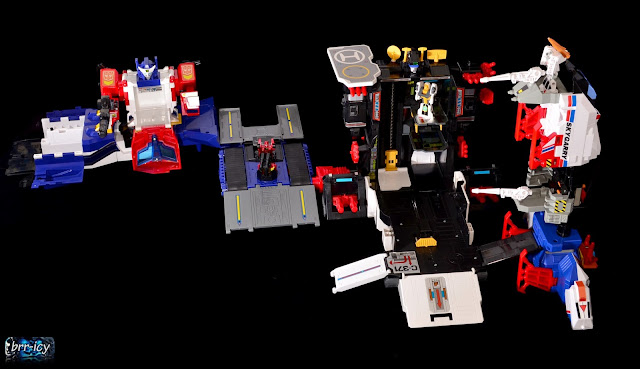 The three of them combine into "Triple Combination Battlestar Attack", which makes Grandus into a second trailer for Star Convoy with Sky Garry on top, not really a combination in the traditional sense, but it's still a cool play feature, i would have loved to have this set as a kid. The connection between Grandus and Star Convoy does swivel as well. 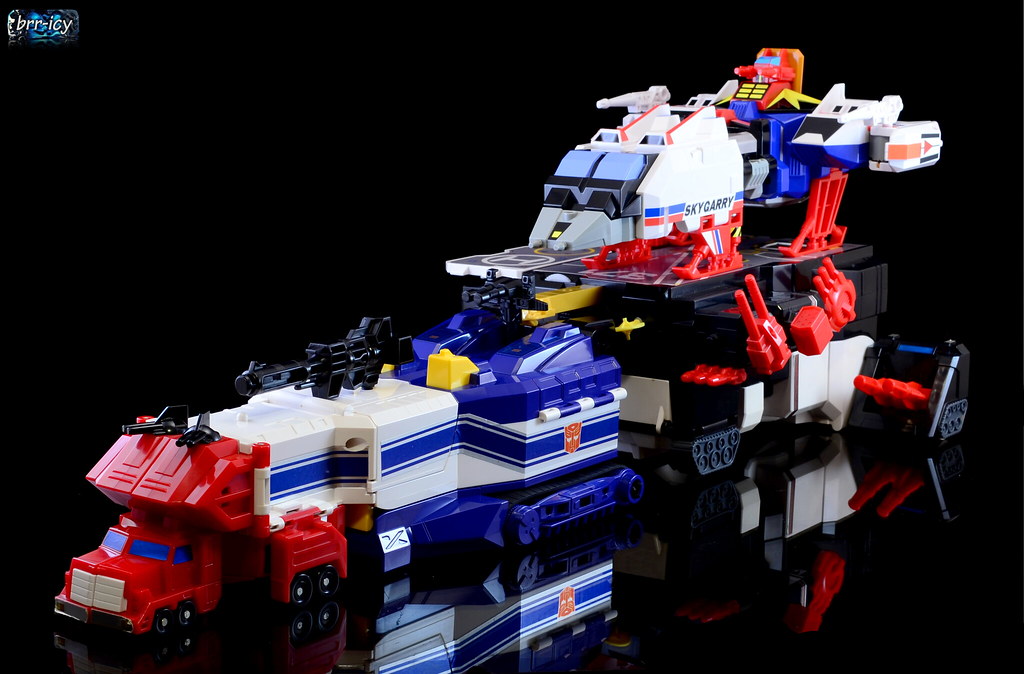 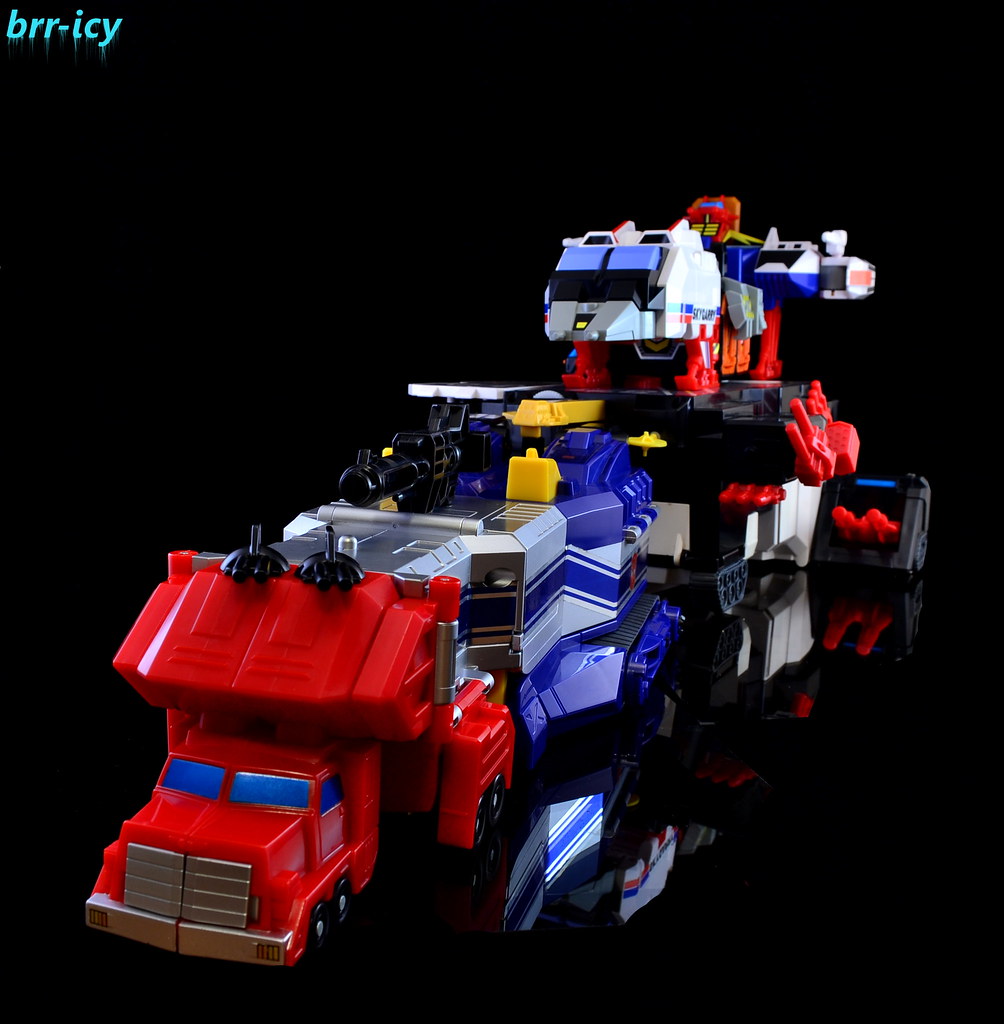 There's also a few other combinations for him.
With Dai Atlas, he hooks on like he does with Star Convoy with the connector.

With Metroplex, which is probably the most combined he gets, the posts on his shoulders peg into metroplex's fist holes very securely 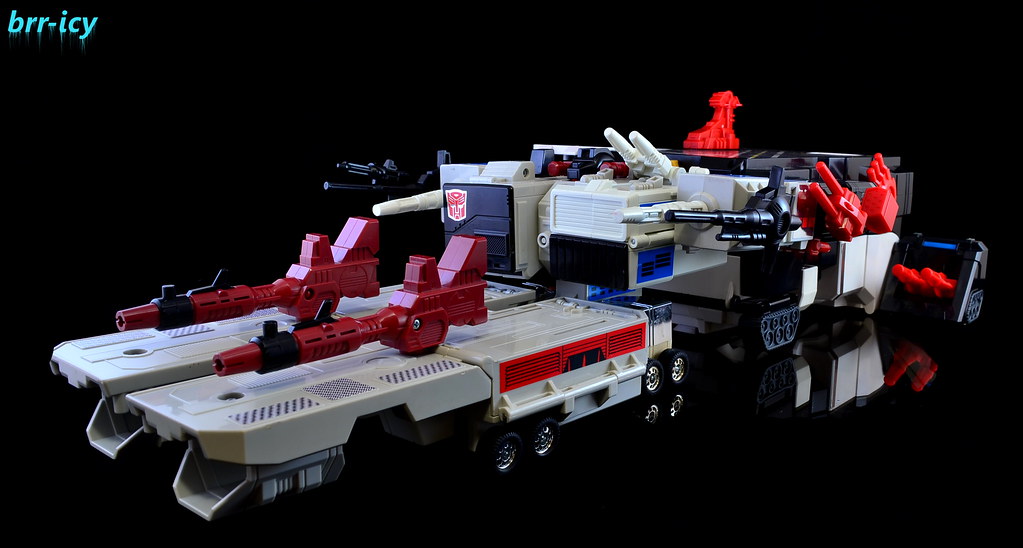 and just for fun since he's a repaint of Metroplex, Metrotitan comes out 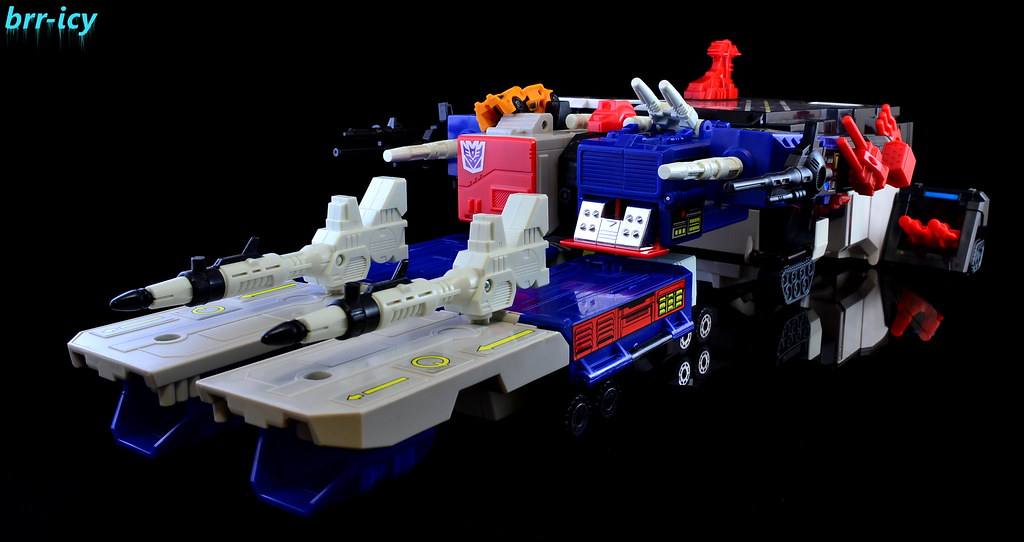 I'm very pleased with this set since i love Micromasters, and i'm unconcerned about poseability. The base mode of all three combined is the biggest Micromaster set. Even Big Powered isn't as big in base mode.
A cool set, with a few neat surprises for me.
Posted by Brr-icy at 12:51