With the recent announcement of Star Saber getting an MP, and a ton of "who dat?" posts on various fan sites, figured I'd review him and Victory Leo. The Star Saber is the first release with stickers instead of chrome on the chest. The Brainmaster is also bare.
Star Saber is the Cybertron (Autobot) Supreme Commander in Victory, he's a master swordsman, and a surrogate father to Jan, the show's kid character. The toy is a bit bigger than G1 Metroplex, combined, he is the second largest G1 figure made. I picked up this piece from a seller on Cybertron.ca who was clearing out his Japanese pieces, missed a few great deals, but did manage to get three very nice pieces from him (Star Saber, Dai Atlas, and Metrotitan) Now onto the pics.
Star Saber is a Brainmaster, which means he comes with a small figure that goes in the Saber figure's chest, simply called the Brain of Courage, it's non transformable, but it does serve a purpose. 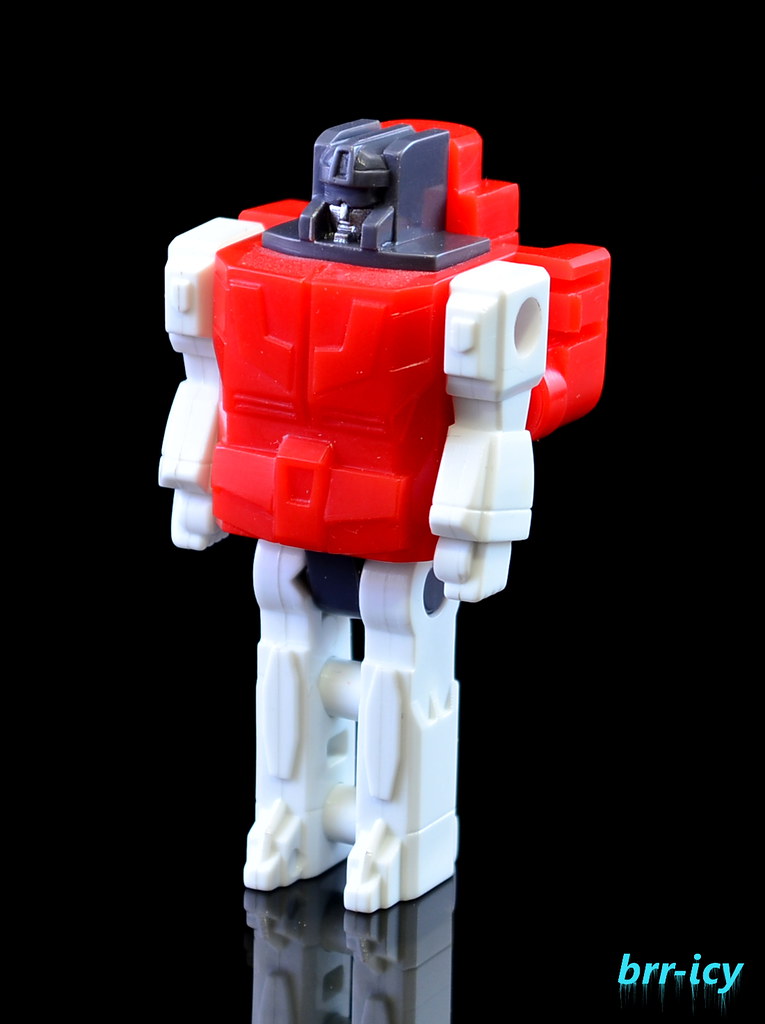 the second part of the figure is Saber, turns into a roughly Voyager sized plane. The cockpit opens so that the Brainmaster can sit inside. You can see the slot for opening it in this picture. The plane has retractable front landing gear, and two wheels on the rear. 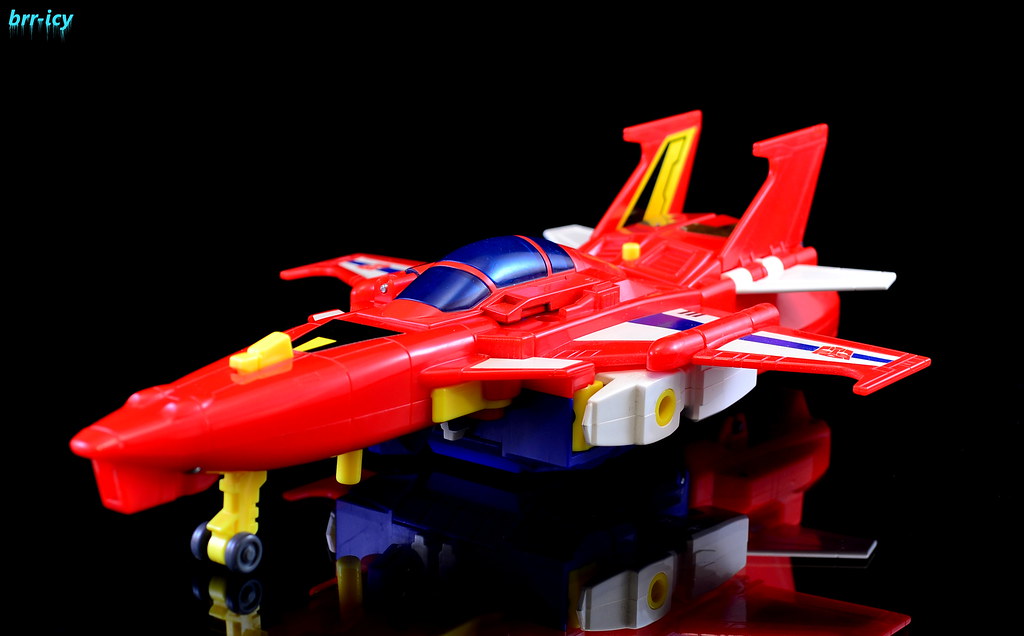 The Brain goes inside the chest of this figure, and when it's closed, the face is revealed from inside the chest, hence the "Brainmaster." The nosecone becomes a shield for this mode. He has good shoulder movement, with knees and can sit. 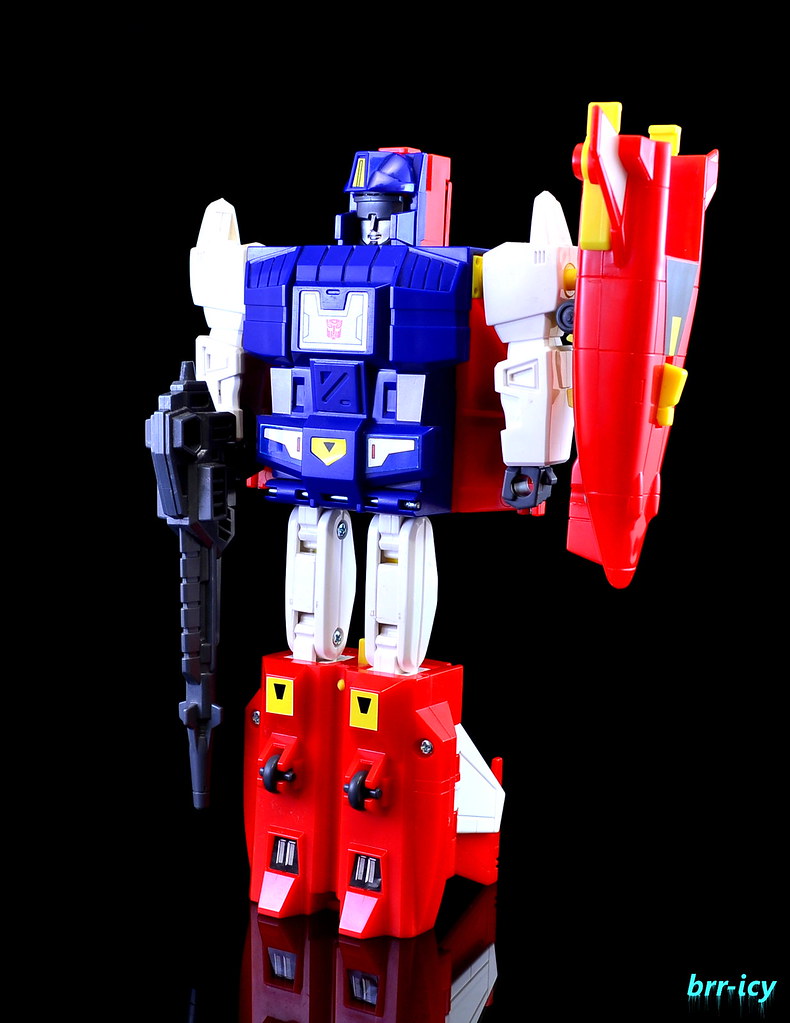 Then we have the V-Star, the third and final part of Star Saber, can be used as a "skiff" for Saber, or transform into a small base. It has fold out landing gear on the front of it, and can store the chrome blade inside the slot on the front of it. 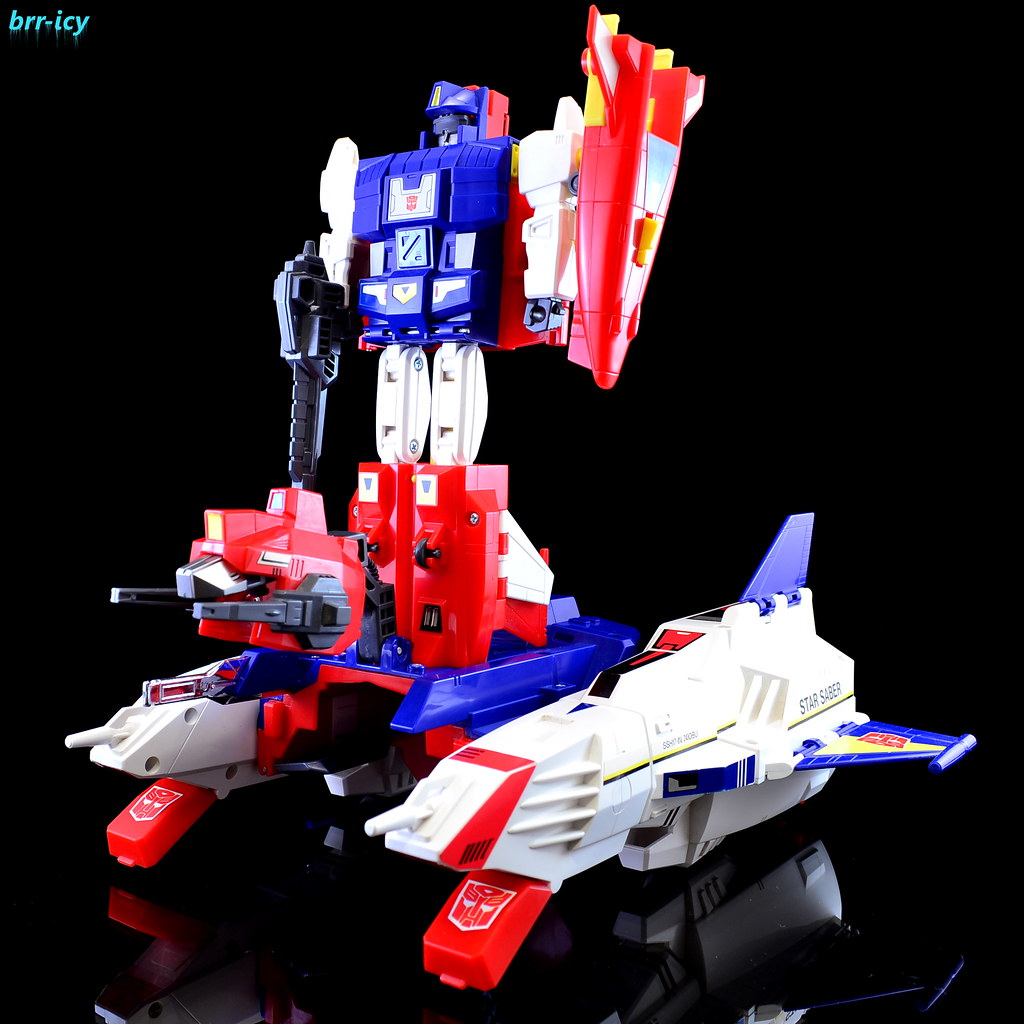 The V-Star has a sort of "base mode" that Saber can man as well. 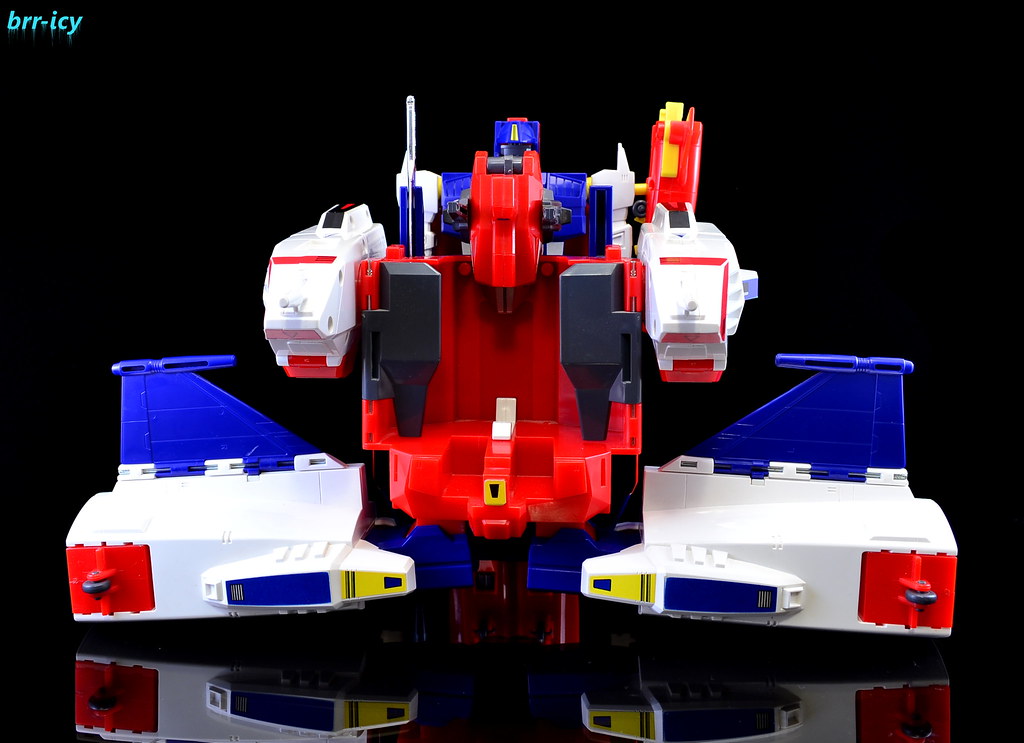 When combined with Saber, the jet mode is pretty impressively sized, bigger than a Leader class figure. 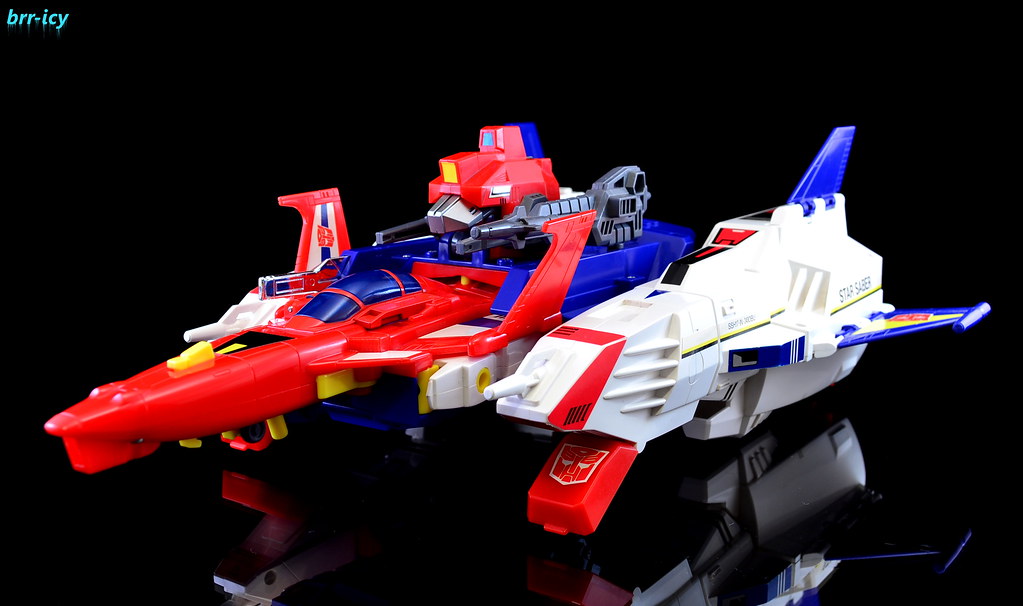 Finally, combined with Saber in bot mode it makes Star Saber, where the nosecone has now become a hilt for the sword. The faceplate is spring loaded and comes down when put over Saber's head. He has some outward movement at the hips and some shoulder and elbow articulation. 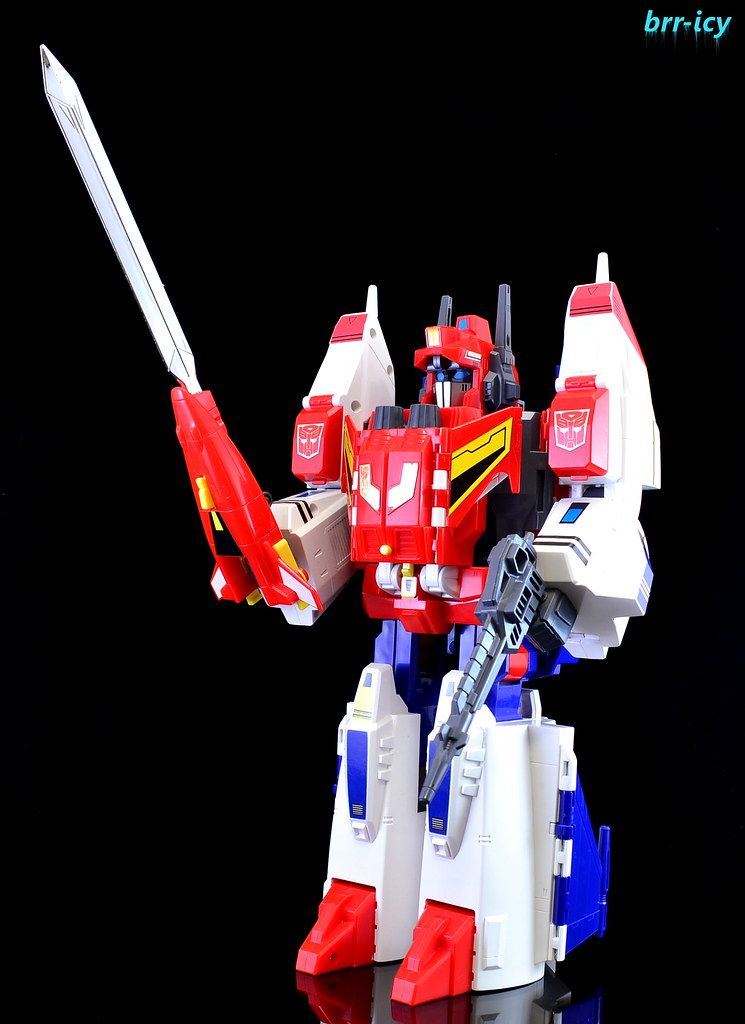 The second figure that makes up Victory Saber is Victory Leo. In the TV series he is a reincarnated Ginrai. Roughly Leader class himself. His main alt mode is a robotic lion. The lion has all four hips articulated, and the front legs have elbow joints. All three of his (rather large) guns sit atop this mode. 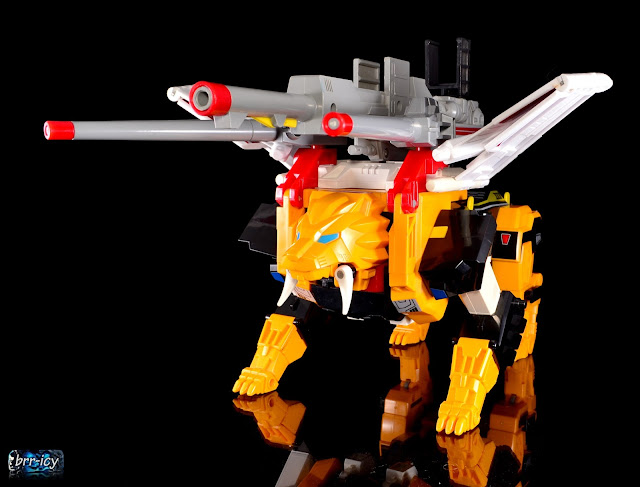 In the show, the animators wanted him to be able to fly, so they made up this "mode" for him, kind of like Sixshot's winged wolf mode, it wasn't shown in the instructions, but the figure is capable of it. 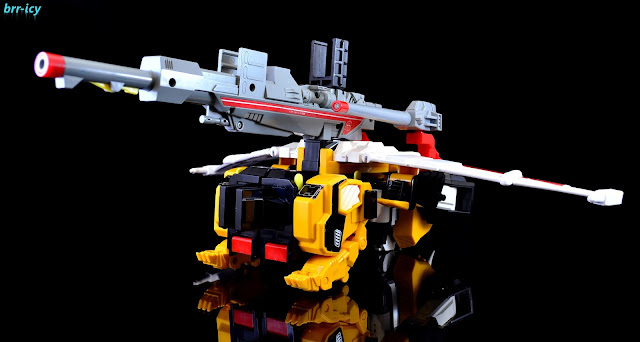 Bot mode is very nice, i love the colours. and the elements of the two previous modes are nicely blended, i really like the arm mounted cannons. The large gun also clips around the transformation joint/gatling gun on his hip. He has well articulated shoulders and elbows. 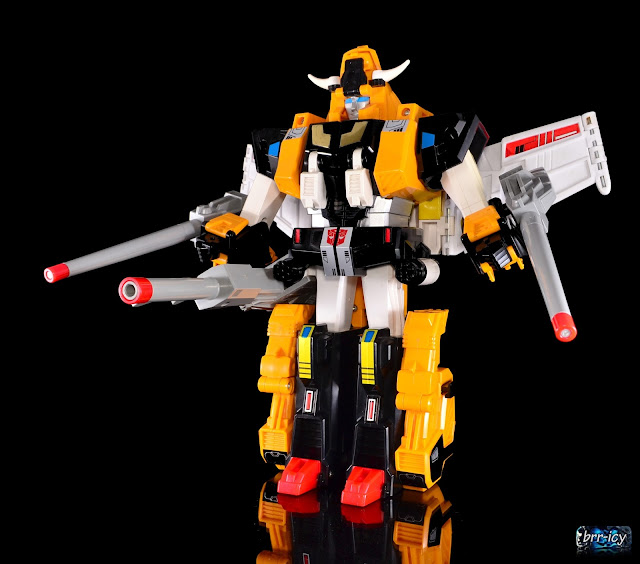 Now onto the combined modes, in jet mode, Victory Leo forms the back, giving a much bigger wingspan, and some big weapons. The combination is really non-intrusive on Star saber. Where Victory Leo attaches is inside the feet spaces and a part that slides between the legs on Star Saber. I'd have to say this is my favorite mode for the set, if i get another set, I'll be displaying it like this. This mode is gigantic. 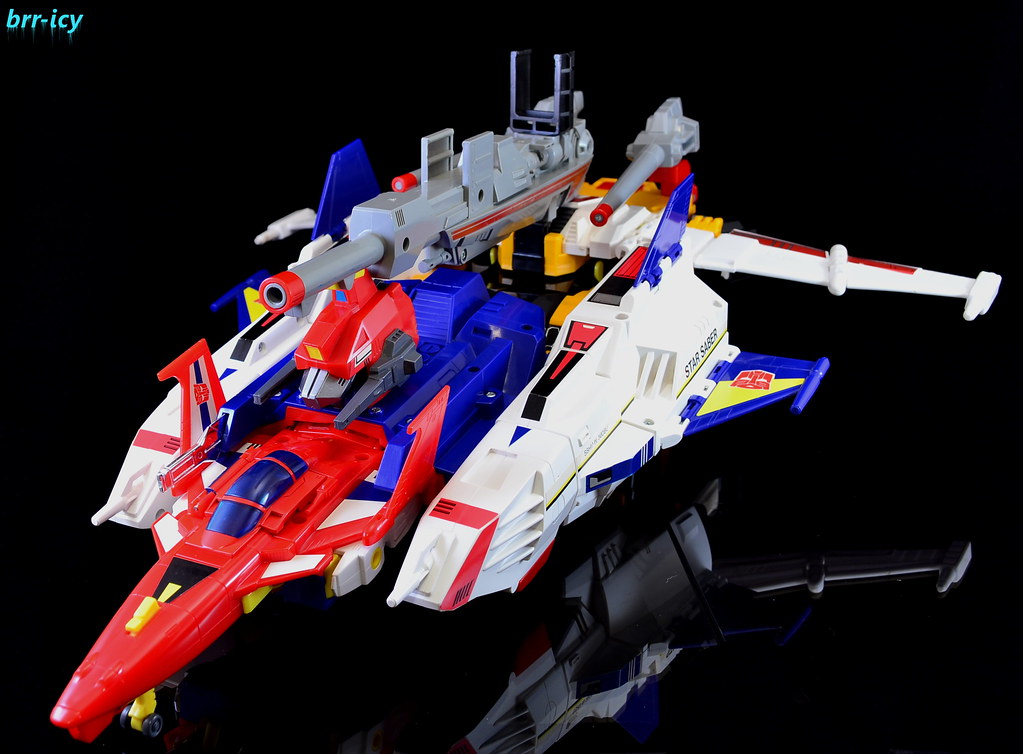 Onto the final mode, Victory Saber. The Combination is different, and very secure. The chest and legs of Victory Leo slide out of the arms and head area and fold in half to attach to the legs. There are small yellow tabs on the inner part of the legs that you have to push to move the caps that cover Star Saber's feet, and they lock in both positions. There is a set of tabs that go int the screw holes on the back of Star Saber's legs to secure those connections. The backpack part clips over the spikes on the shoulders and there is a large tab that clicks on the bottom of his back. Victory Leo's weaponry is also used in this mode. 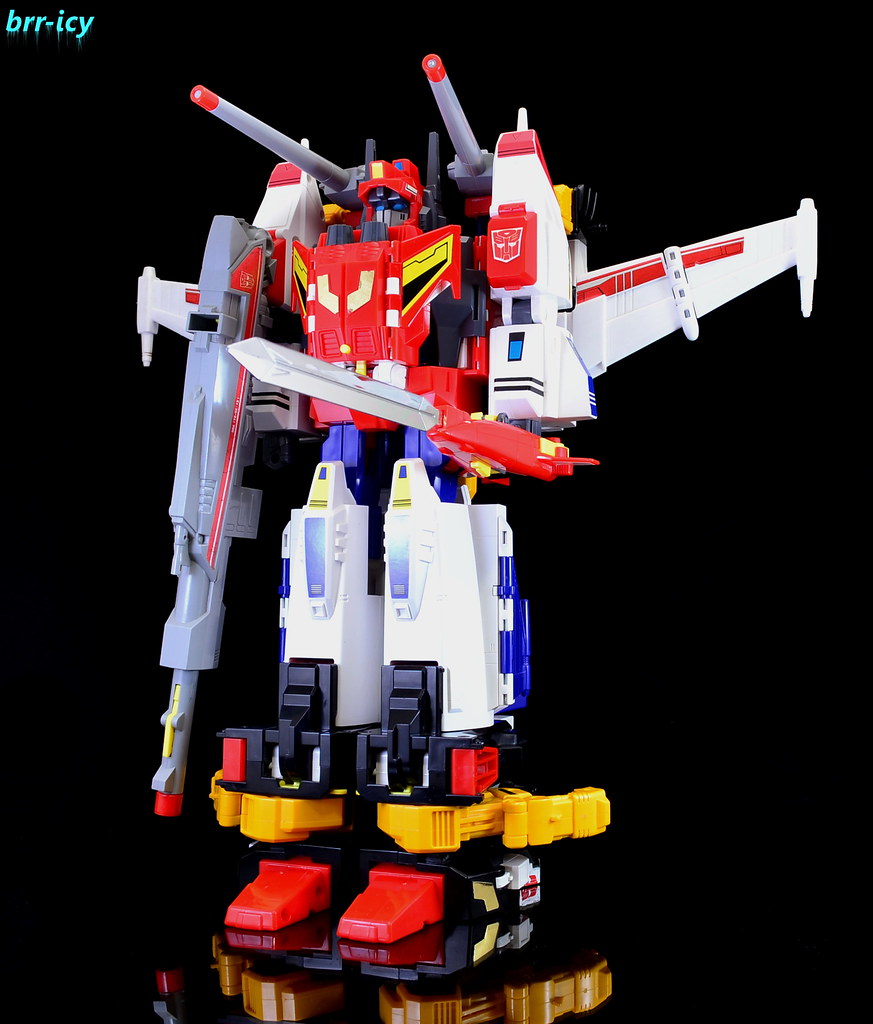 To show you the full combined size, this is him in a standard Ikea Detolf shelf. The wings have to be angled back slightly and you can only slide him in, it leaves about a millimeter on top of the shoulder guns, and no space to the tips of the wings.

This figure is definitely worth picking up if you're only going to get a couple Japanese G1 items. It's fairly easy to find, there's always a couple on ebay or in forum sales threads. I am pretty excited about the upcoming MP version.
Posted by Brr-icy at 13:24